There is nothing a young mom, deep in the trenches of young parenthood, wants to hear less than, “It goes so fast” Of course these more experienced moms probably want to shake the younger generation of moms and yell, “IT WENT SO FAST! WAKE UP!” as we move through our world in a yoga-pants-wearing-zombie-like state. But, the truth is, that’s not even close to what we want to hear. But, that doesn’t mean we don’t want to hear anything. I recognize that you have experience that I don’t. And, in some ways, I want to shake you and say, “TELL ME!! It gets better, right? RIGHT??”

But, I’ve realized that every mom has to come to her own realizations about how fabulous parenthood is. How blessed she is. How amazing raising kids is. Because even when it sucks, it really is amazing. But, every mom has to realize this…

Because, I have realized, that there is nothing I could say, or anyone else could say that has enough power to teach the lessons that every mother needs to learn by just going through it.

So, I’m willing myself to be that old lady that remembers with a clear perspective. And, remembers that while it was oh so beautiful, it was also oh so damn hard.

Tell me, empty nesters, to look forward, but don’t tell me how to do it. I might just be that young mom that stares into the eyes of a more experienced mom begging her to say something encouraging when my 2 year old is screaming in the parking lot because I didn’t let him buckle himself in. Tell me with encouragement, or tell me with a hug. I’m fine with either.

Maybe, as an empty nester, it’s hard to know what to do. Because the moms with little kids? Well, we can be sensitive. Very. So, here’s my advice to those well-meaning “experienced” moms that just want to shake me when they see me frazzled in the grocery store, not exactly appreciating every moment. 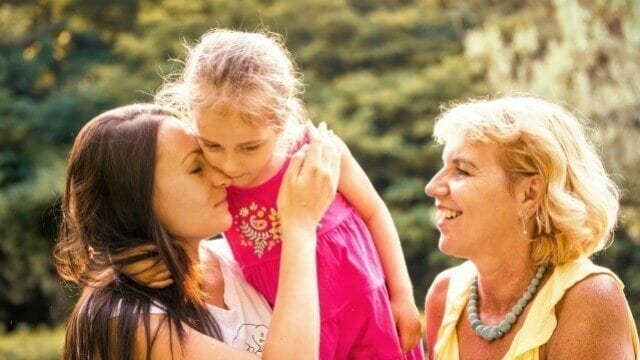 1. Say Nothing. While I know it seems like not much help to say nothing, sometimes that is just best. I know there are days where if anyone had said something even sweet, light-hearted, or joking to me on one of those I-want-to-run-away-and-live-on-a-deserted-island-and-have-a-volleyball-for-a-best-friend days, I might have not been so nice back. Instead, a kind smile, a nod, or even some sympathetic eyes can go a LONG way to healing a new mama’s heart in a bad moment.

2. You’re Doing an Awesome Job. Every parent is getting something right. Promise. Trust that the new mom who looks like her child is straight up lacking in discipline is probably doing a hundred things right at home that you can’t see. Instead of advice, simply tell her she’s doing a great job.

3. It Gets Easier. Now, this one, you have to tread lightly because…well, hormones. And, sleep deprivation. And, three year olds. But, letting a mom know that it will get better, without elaborating too much, can keep that new mama from losing it. Say something simple like, “Oh sweetie, I know how hard it is. I’ve been there. But, just keep doing what you’re doing. I promise it gets easier.” It will be really tempting to throw in there that “enjoy every moment” sentiment too, but don’t. Just give her a light at the end of the tunnel and leave that happiness and hope lingering in the air.

4. Can I help? Most moms will probably decline this sweet offer, and that’s OK. Don’t come off as the creepy person that’s going to snatch the baby, though. Instead, offer to pay for her groceries, or push her cart out to her car, or maybe make faces at the screaming baby while she is checking out to make that kid be quiet. Even if she says no, an offer of help can go a LONG way.

5. Share solidarity. I would love it, if just once, an older lady would put her hand over her heart and say, “There was this one time…” and share a story about their own rotten kids and the time they almost lost it in the grocery store. Don’t go into a 20 minute monologue. Nobody has time for that. But, instead, share a funny story about the day your kid shattered a giant jar of pickles in the checkout line or the time you lost your kid in IKEA. Even if that mom looks like a deer caught in the headlights, because you’re sharing your own bad day, you will make that mom feel better about whatever she might be going through.

You, my dear, experienced empty nester moms, might be the only adult interaction that younger mom has that day. Use it wisely. And, as a young mom myself, I promise I’ll try to be a little less sensitive, too.

Every parent has sat through their fair share of miserable kid birthday parties. Fussy adult guests, overtired toddlers, and a … Read More