A few years ago, I got a tattoo on the back of my upper right shoulder. That’s right. I’m a tattooed mommy. And I don’t regret it. I gave years of consideration and thought to whether or not I wanted to forever mark my body and when I decided I did, gave it years more thought as to what graphic representation I wanted. 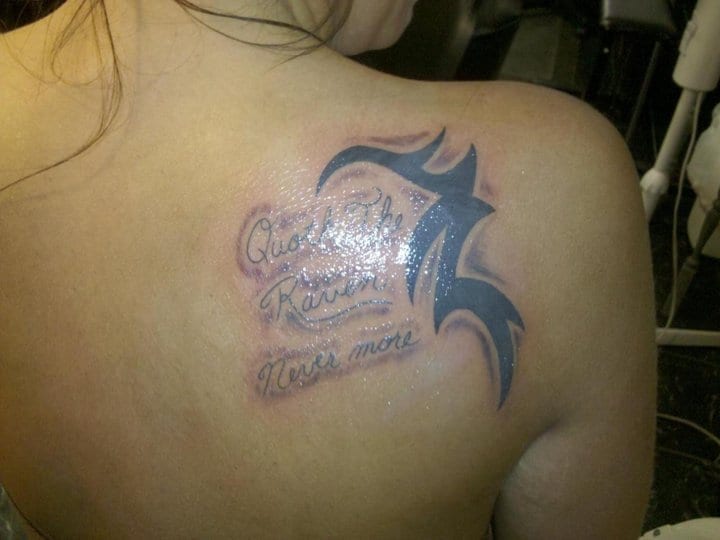 In case the image was too heavenly, the tattoo has a tribal feel and says, “Quoth the raven nevermore.” Actually, they goofed and spelled nevermore as never more (idiots). At some point, I plan on going back to have an outline of a raven placed in the space between the words and, thereby, fixing an unspeakable error. Until then, I try to reveal the tattoo only to uneducated people (just kidding). It’s really not a big deal (I should have sued the nitwits.).

For the most part, people seem to like the artwork and support my decision. I have, however, taken some heat for getting a tattoo or as others like to put it, “scarring my body.”

The kids drove me to insanity! What do you think?

And fake boobs are??

“That lasts forever, you know?”

Seriously?!? They never mentioned that part.

“What’s wrong with you?”

“Are you a biker chick? Do you ride a bike?”

And my favorite has to be:

Dude, I’ve had four kids. The damage was done long before I got tattooed.

So mothers of the world, fess up! Do you have a tattoo? What are your thoughts on tattooed moms?

Man Rescues Cat From Tree, and…

Diapering is obviously one of the least pleasant parts of this parenting gig. In fact, it can be downright shitty … Read More

Prancer, The “Chucky Doll In …

A couple of weeks ago a Chihuahua named Prancer shot to internet fame when his foster mom, Tyfanee Fortuna, wrote … Read More