Craving a crazy good breakfast that you get to wake up and enjoy? This Crock Pot Bacon Cinnamon Roll Breakfast Casserole is the best.

Get ready to drool! This past weekend I made the most scrumptious, off-the-cuff crockpot recipe to date. May I introduce you to Crock Pot Bacon Cinnamon Roll Breakfast Casserole!

In a matter of minutes, you can prepare a mouth-watering breakfast delight that the entire family will devour! (Even the pickiest eaters will eat this!) 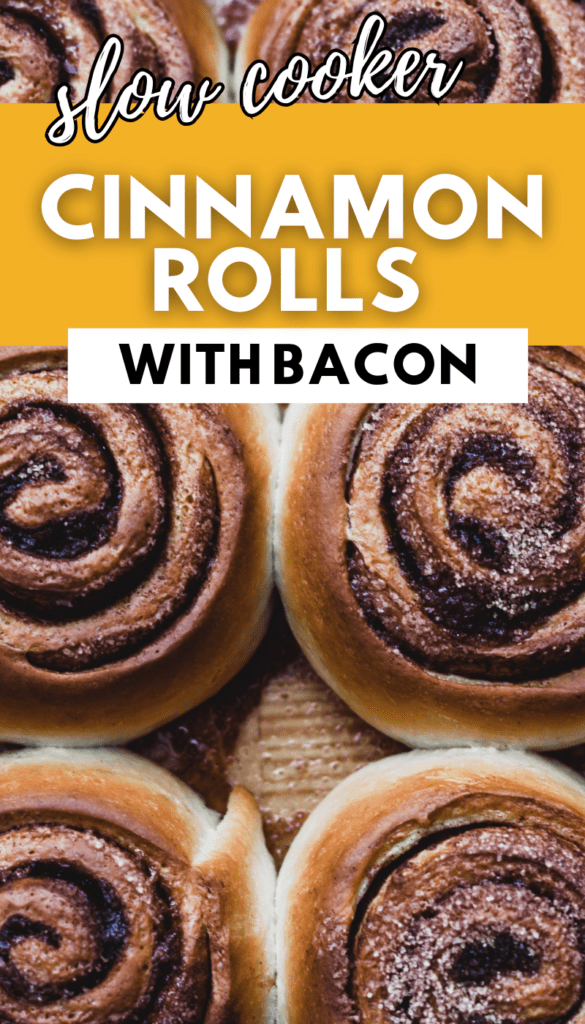 I’ve made several breakfast casseroles in the crock pot. It’s one of my favorite ways to cook up a delicious breakfast where I know I’m not going to mess it up.

And while you’re waiting for the cinnamon rolls to cook, whip up this Cocoa Butter Smoothie as a fun treat, too!

Tips for Making Cinnamon Rolls in the Crock Pot

You MUST spray the crock to prevent sticking and ensure the best possible end result. Otherwise, you’re going to be digging it out and scraping the sides with a spoon. (still delicious just not pretty)

You can make this one with bacon or sausage crumble. My son asked that I put cheese in it next time. If I do add it to the recipe, I’ll probably choose a sharp cheddar for contrasting tastes. It’s easy to change up the variety and ingredients quickly, which I love.

You can always make cinnamon rolls from scratch a few days before, just don’t forget to whip up some icing as it really does add a nice finishing touch.

Pair this Crock Pot Bacon Cinnamon Roll Breakfast Casserole with yogurt or fruit. Leftovers can be reheated in the microwave and it’s a great flavor and taste that everyone in the family will love.

Layer one roll of cinnamon roll pieces at the bottom of the crock pot. Save the frosting packets for later.

Pour the egg mixture evenly over the cinnamon rolls in the crock pot.

Place remaining roll of cinnamon rolls on top of the mixture.

Cover and cook on Low for two to three hours, or until sides are golden brown and the rolls are set.

Spread frosting that came in the cinnamon roll tubes over the warm casserole.


Build-A-Bear Has Just Released A &#…

ABOUT US
Because Parenting is Hard AF
Contact us: support@filterfreeparents.com
FOLLOW US
© Filter Free Parents
Skip to Recipe