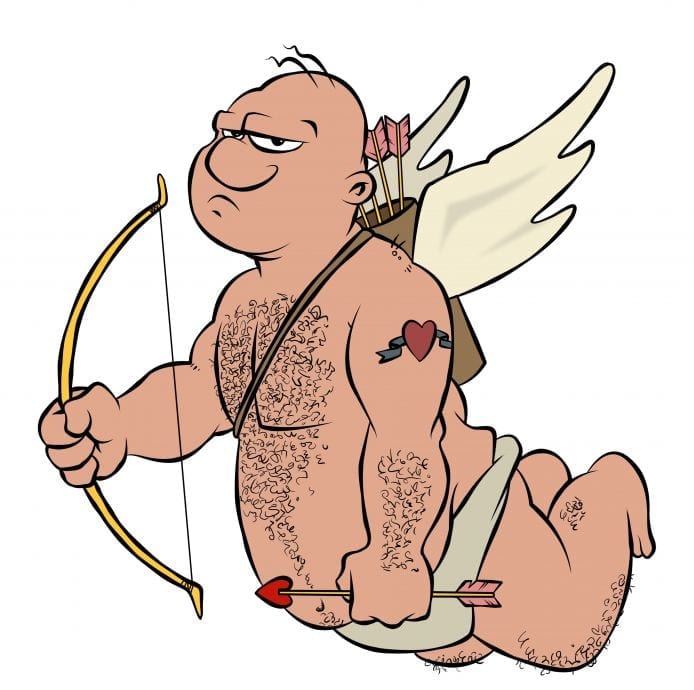 I’m pretty sure that at some point someone explained to me why Cupid was associated with Valentine’s Day. Then I had children and my mind became a floating melon. I can’t remember which name goes with which kid. And I sure as hell have no flipping clue why a naked troll armed with a crossbow is love’s representative. So I did what any upright mammal with two legs would do…I Googled to find the answer. Here’s what I learned:

Cupid became associated with Valentine’s Day because he was the son of Venus, the Roman goddess of love.  According to Roman mythology, Cupid was known to cause people to fall in love by shooting them with his magical arrows. Cupid is derived from the Latin word cupido, which means “desire.”

Now you’re probably thinking, “Awwwww…He’s such a a cute little squishy dude. Bouncing here and there, making us mortals go all googly-eyed.” Oh please. Don’t be a sucker. Don’t let the Robin Hood wannabe fool ya’. Cupid is a scandalous little bastard. According to Durex condom company, condom sales are highest around Valentine’s Day, which are 20 percent to 30 percent higher than usual. BUT, ironically, more at-home pregnancy tests are sold in March than in any other month. Looks like a few of Cupid’s victims forgot to wrap the pound cake. This can lead to only one conclusion: Cupid causes venereal disease.

Proof is everywhere! Take Penicillin, for example. This popular treatment for hoochy coochy diseases such as syphilis was introduced to the world on February 14, 1929. Coincidence? I think not.

And there’s more! The roots of St. Valentine’s Day can be traced back to the Roman fertility festival of Lupercalia. On Lupercalia, a young man would draw the name of a young woman in a lottery and would then keep the woman as a sexual companion for the year. Did they have condoms? No. Did they test for STDs? HA!

Cupid, Cupid, Cupid. You’re a dirty little arrow shooter. But you have brought the world some good, too. You’ve made women stronger and more independent, with 15 percent of us sending ourselves flowers on Valentine’s Day. MANY men forget, so… (Don’t forget guys! Or we’ll have to cut you. )

Know some other wild and crazy facts or stories about Valentines Day? Share in the comments!

Study Reveals It Takes About 1…