I’d be lying if I didn’t admit that my favorite part of Halloween as an adult comes after the actual holiday. It’s in the days and weeks that follow when I sift through my kids’ loot to see what they scored on their laborious trek through the neighborhood begging strangers for sweets for a change.

It’s the one time of year my kids actually WANT to work for something, and I get to reap the benefits every time they piss me off enough to hide in the bathroom with chocolate.

But not any chocolate. THEIR chocolate. What parent doesn’t love everything about the sweet treat of revenge?

I’d also be lying if I didn’t admit that I *may* steer my kids towards the houses that I fondly remember from past years… you know, the ones that had the “good candy.” Because they might not be old enough yet to figure out that not everyone is handing out the good stuff, but I sure as hell am. 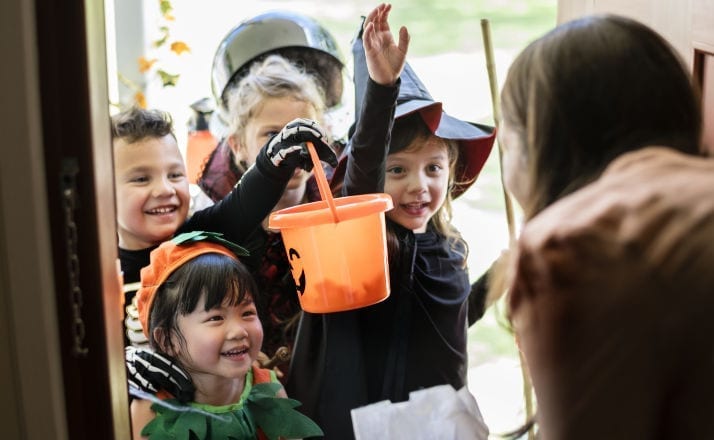 I’ve been shepherding my kids around town on October 31st every year like a damn FOOL when, clearly, I should have just gone straight to the source and demanded that home dwellers everywhere step up their confectionery contributions this year, like this one dad did.

One dad’s post has gone viral in the Facebook group, Elmhurst IL, News And Comment where he calls out his neighbors for the slow decline of the “good candy” options for trick or treaters in his town.

He demands a more thoughtful offering from his fellow neighbors in their candy options. He also maps out his plans for this year’s record keeping, public shaming, and offers a quick math lesson for those who might need a little reminder of what “fun-sized” means.

His post is tooting affluence and privilege … and a whole lot of satire. But the internet didn’t quite pick up what he was putting down and that’s the real sweet treat in all of this.

In fact, lots of people thought he was totally serious. Here’s his post so you can judge for yourself: 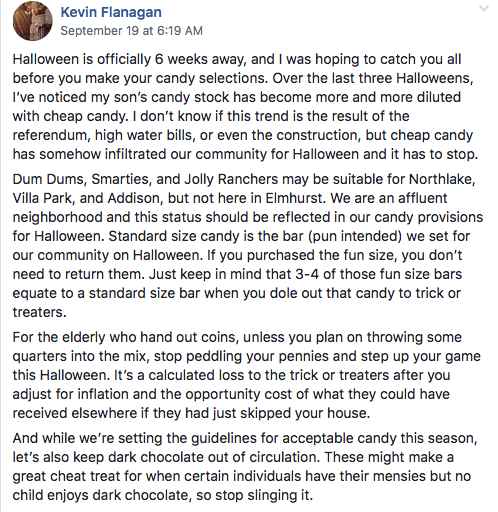 The post was some of satire’s finest, but it didn’t end there. Someone took it to Reddit (because, OF COURSE) and it wasn’t long before users were IRATE over the nerve of a man trying to tell them what kind of fuggin candy to offer kids, as if their butterscotch rounds really ARE appreciated by everyone in town and not just their grandparents.

And, like all good viral posts on the internet, the comments that followed are where the true hilariousness lies.

“It’s a nice town and not as rich as some surrounding neighborhoods, but some of the most entitled people live there. I’m from there and I can confirm they’re a bunch of pricks. Our f*cking gym teacher is paid six figures.”

Why we gotta bring teachers into this, bro? Sorry you had to run the mile, but if your neighborhood was passing out “the good candy” every Halloween I’m guessing he was just trying to do you a solid, jeez.

“I honestly think this is one of those parents that sorts through their kid’s candy, pretends part of it is ‘unsafe’ and needs to be thrown away, but actually keeps the ‘bad’ candy for themselves.”

Sorry to burst your bubble, pal, but ALL parents do that. It’s just the parent way on Halloween. Haven’t you heard of the parent tax?

It’s a rite of passage and you know what? That candy you’re holding doesn’t look very safe, you should probably give it to me so I can take care of that for ya.

I don’t think I will turn down a bet with this user, ever.:

“This is from Elmhurst. It’s 100% believable. I live in a suburb not far from there and they have the same type of entitlement mentality.”

Those odds aren’t looking very good for you friend, 100% is like … all the percents. That’s a real bummer.

But, not all was lost. While some were gathering their literal and costume accessorizing pitchforks, many commentators stepped up in his defense that, YES, HE WAS NOT SERIOUSLY GOING TO SPRAY PAINT YOUR SIDEWALKS!

The angry comments from Reddit users made this whole post that much funnier, because if they knew this man, they would know that he makes posts like this A LOT.

As a member of the neighborhood group myself, I can assure you It’s his “thing” to troll his neighbors and many of us actually appreciate his sense of humor considering, let’s be real, Facebook parenting groups can sometimes be a real snooze fest.

Or a drama fest. Less often it’s a laugh riot.

Here are a few of his other gems you can find in the group:

He jokes about spending too much time in the Facebook group and getting in trouble with the wife.

And stealing his neighbor’s internet and mail: 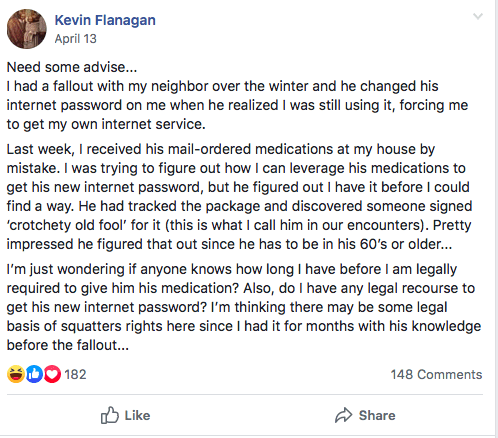 And knocking down old lady’s at the neighborhood event with his double stroller: 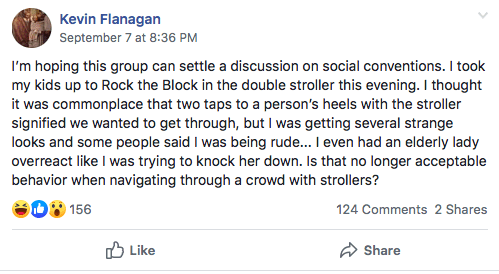 But if you thought that was the best this post had to offer, think again. Not only were the Reddit users upset, but what really hit this post out of the park were the countless articles written about the “angry dad condemning people for cheap candy.”

Lighten up a little, but seriously, skip the dark chocolate. Nobody likes that garbage.

Mom Creates Graph Of Every Fee…