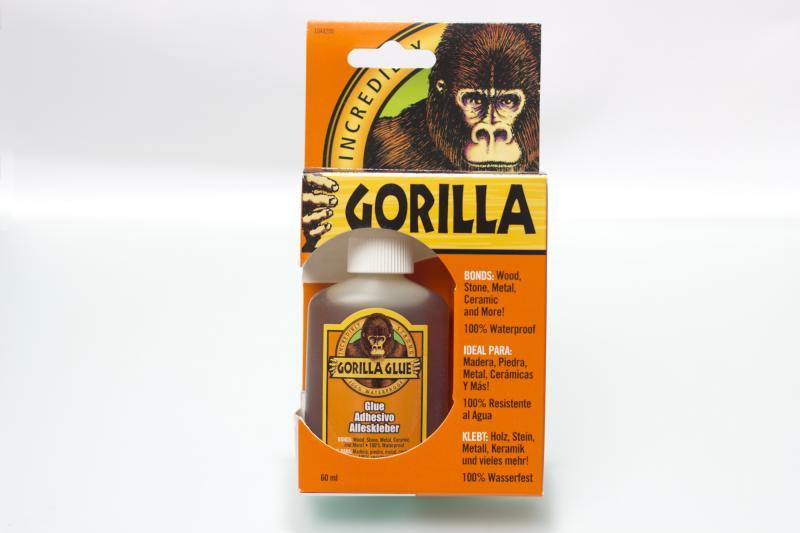 I had a major mishap this weekend while working on my flea market flip project – the music-themed end table. Despite everyone trying to urge me not to glue the metal music box disk to the top of the table, I decided that it would be safer secured. Because the wood is so thin, screwing it down was not an option. On to Plan B.

My first thought was to just hot glue around the edges. I should have stuck to that plan, but that’s when I caught sight of an unopened bottle of Gorilla Glue sitting in the drawer. It was whispering, “Open me and I shall pay you handsomely.” Who in the hell listens to a glue bottle? Yes, moi. The damn primate on the front got to me.

Have you ever used this stuff? Seriously guys, this gunk could seal cracks in the earth back together. We’d never have to worry about California breaking off from the US. It’s powerful, but should really come with multiple warnings including:

I then carefully placed the disk onto the table, making sure it was centered. Perfecto! The instructions said to clasp the objects tightly together so that they would bond. Since the disk was sitting on top of the table, I decided to place something heavy on it. The heaviest thing within reach was a tea kettle filled with water (remember the warning about water?).

Craving a cup of coffee, I walked away for a few minutes. That’s when I heard my son asking why the table was foaming. WHAT?!?! Running over, I immediately realized that activate meant “foaming action”. Through all of the tiny holes in the disk the glue was bubbly up through. It was like an erupting volcano in the middle of our kitchen. Shit! As I tried to remove the tea kettle, it occurred to me that it was stuck – because all the glue was seeping upwards and bonding with its neighbors. Ugh!

I was able to jiggle it loose, but not before the water inside splashed here and there – creating even MORE freakin’ foaming action! At this point, I went into a sheer panic. I’d worked way too hard putting this together for it to turn into an epic failure. So I did what any panicking crazed woman would do, I began wiping off the excess glue with my hands and fingers.

Yeah, it wasn’t an Einstein moment and within seconds I realized that my digits were bonding with each other, with the damp cloth I was using, with the metal disk – with every gawd dang thing I touched! Trying to wash it off was nearly pointless. Water equals activation!

When I finally got the stuff off of my hands (thank you Fast Orange hand cleaner), I assessed the damage to the disk and table. The good news is that all glue was contained within the disk. None seeped onto the table. The bad news, I now have to figure out how to remove all excess glue. I’m considering a blow torch. Or the Jaws of Life.

Oh! This little heads up was on the bottle the whole time. Hey Gorilla Glue manufacturer! I suggest making it bigger and placing a flashing neon border around the outside. 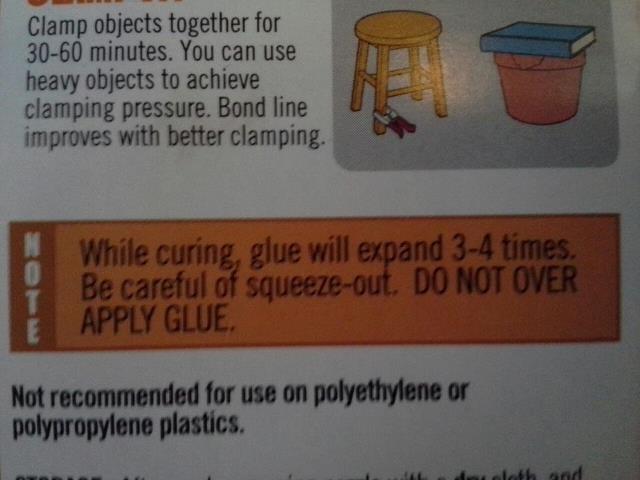 Doctors Warn Women Not To Use …

Sexual Use of Eggplant And Peach Em…

Texting without emojis is like the sky without the sun (*insert sun emoji HERE*). Can you even remember a time … Read More