If you’re anything like me, you think parenting comes with plenty of it’s own drama.  So how do you deal when grandparents undermine parenting?

There’s something that comes over a mother when grandparents undermine parenting.  Whether they do it intentionally or unintentionally, in your face, or in secret,  there are ways to handle the situation.

It was Halloween.  My son was not quite two and heading out with the family for his first Trick-Or-Treat.  He refused to eat much for dinner, and as a rule no dinner = no treats.

This also happened to be the first trick-or-treat outing we spent with my husband’s family in a few years.  When my daughter was younger, we did it once and I didn’t want to return.  Her cousins were wildly running through the streets.  The parents let them load up on candy all night and act like hooligans.  And I get stressed out around kids with no manners or discipline.

I vowed never to do it again.

But, here we were among the madness at my husband’s request.

The first home we stopped at had a popcorn bar full of treats to load into a cup.  My MOTHER-IN-LAW asked if my son could have a cup of m&ms to which I responded “This is the first house we stopped at and he didn’t want to eat dinner.  He doesn’t need the junk right now.”

Knowing we had a long night ahead of us, I wanted to save some of the junk to help curb the toddler’s crankiness later in the evening.  It wanted to use candy bribery as my “oh shit” handle (or backup plan) to help us finish the night with some peace.

I walked away to help my daughter fill her cup so we could move on.  But, when I returned to my son and husband, I was shocked to see the toddler sitting in the stroller with the m&ms.

This wasn’t the first time I’ve had issues with one of the grandparents undermining our authority.  Sadly, I also know it won’t be the last. 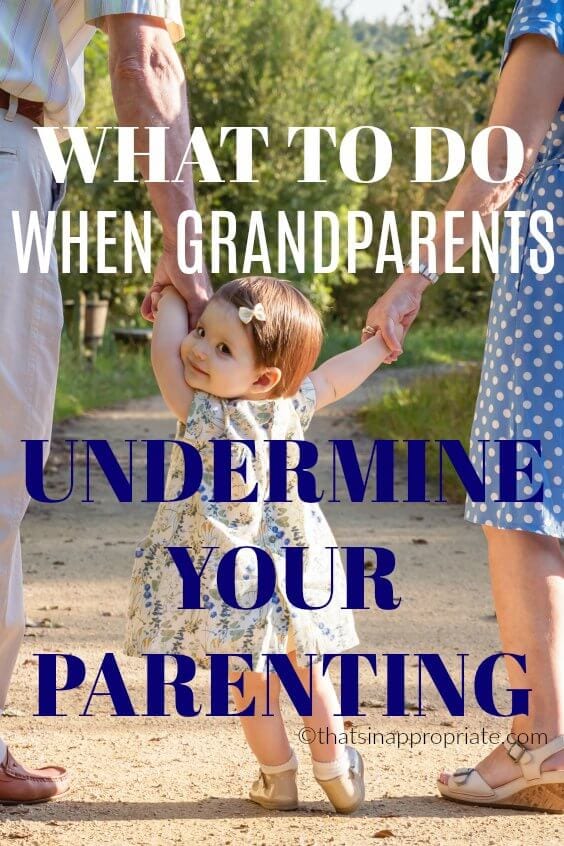 What To Do When Grandparents Undermine Parenting

Ask Yourself: “Is This a Safety Issue?”

If your child could be seriously harmed in a situation in which you were being undermined, speak up.

When you’re dealing with your spouse’s parent, it’s important to remain calm and collected.  Never speak out in the heat of the moment because you can do more harm than good.  Of course, if your child’s safety were in question, this doesn’t apply in my opinion.

Ask Your Spouse to Handle It

This point is applicable when it’s his parent doing the undermining.  Explain the situation and why you felt you were undermined.  Ask him to handle the situation in a way that he feels will be both appropriate and effective.

Talk to the Grandparent As Soon As Possible

Once you have both come to an agreement (and you’ve simmered down), talk to the offending grandparent as soon as possible about the situation.  One really good suggestion is to mention that when parents are around, they are the authority.

When Grandma is in charge, doing things her way is okay so long as the kids are safe and she has their best interests at heart.  If it’s your parent, this is your job.

Remind Them You’re the Parent

When GRANDPARENTS AND PARENTS DISAGREE on parenting, which is quite common, it’s okay to remind them that it’s your turn.  You’re raising kids under your rules, trying to teach them CHILDHOOD LESSONS you value, and in a way that works for you.

Don’t Let Them Undermine the Other Parent

If you know your mom or dad is undermining your spouse, show them that you’re united.  PARENTING teamwork goes a long way in raising good kids, so grandparents need to know you’re seriously a team.  Standing up for each other will go far in strengthening your marriage, too. 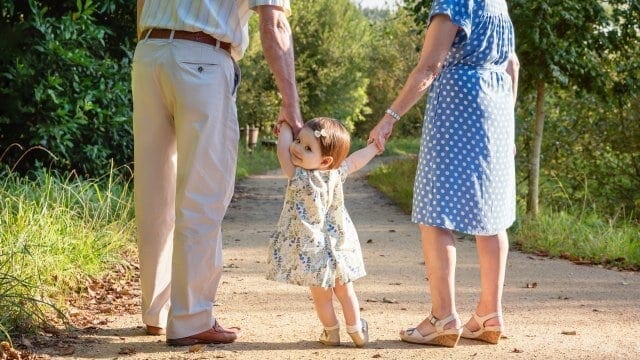 Though I wish we could all be lucky enough not to have to deal with it, it hurts when grandparents undermine parenting.  It has the potential to degrade relationships and could seriously affect how a child views their parents.

I don’t know about you, but I’m a TIRED MOM of two kids.  I’m desperately trying to raise them to be well-disciplined, mild mannered, and good citizens.

Parenting is hard work on it’s own without dealing with grandparents who cross boundaries.

Sometimes we need to re-frame our thoughts in order to feel better about the people in our lives.  Remember that GRANDPARENTS ARE IMPORTANT TO YOUR KIDS for many reasons.  Try to focus on some of the benefits your kids receive from having Grandparents in their lives if you’re dealing with difficult feelings.