These are the only two words that I tell my son before a travel soccer game. And after the game, I ask, “Did you have fun?” If he is open to talking about the game, I welcome it, but I do not force it.

I don’t analyze his performance like an ESPN commentator during or even after the games.

Yes, I applaud him on the sidelines as most parents do. “Great defense, Anderson!” I shout. I want him to know that, as his mother, I will serve as HIS NUMBER ONE FAN—even when he doesn’t play that great.

But it’s also important that my son understands that I leave the coaching to his coach. Yes, I graciously give that role to him, and leave the role of Mom to me. I’ll admit, as someone who played soccer through college and has coaching experience herself, that this can be difficult at times. I get why it’s hard to keep your mouth shut.

When my son starts a game timid, I have to get a stapler out and staple my mouth shut from shouting, “Get in there!” or “Be aggressive!” I grip the metal bleachers underneath me when he’s trying to stop a goal—hoping he doesn’t get scored on. But it’s important that I keep quiet to help prevent burnout, and most importantly, to keep his love in the game.

As parents, it’s hard not to MICROMANAGE THE MOVES OF YOUR CHILDREN, not just in sports, but in everything our children are involved in. But we need to do our best to step back and let them figure it out. Let the teachers, teach, and the coaches coach. Our job is to love them, encourage them, support them, and guide them when they need it.

But trust me, they don’t need it during and after every single game or practice.

I witness other parents on the sidelines. They yell at their kids, “Get your head in the game, Joey!” “Tackle that player next time!” But I also watch their child tense up, too. These poor kids, young kids by the way, experience anxiety on that field instead of joy.

Sports and all extracurriculars, should be fun—something kids look forward to doing.

They should want to go to practice and compete during games. These activities are about learning more than the game, too. These little players are acquiring character and team-building skills. It’s learning to OVERCOME FAILURES. It’s not always about being the best at something.

The standards are much higher for kids today. We start them younger in sports and work them ragged. It’s not like it was when we were kids. We showed up for practice, played hard, and laughed a lot while playing games. Yes, we worked our asses off, too, but the pressure wasn’t as severe as it is for our children. 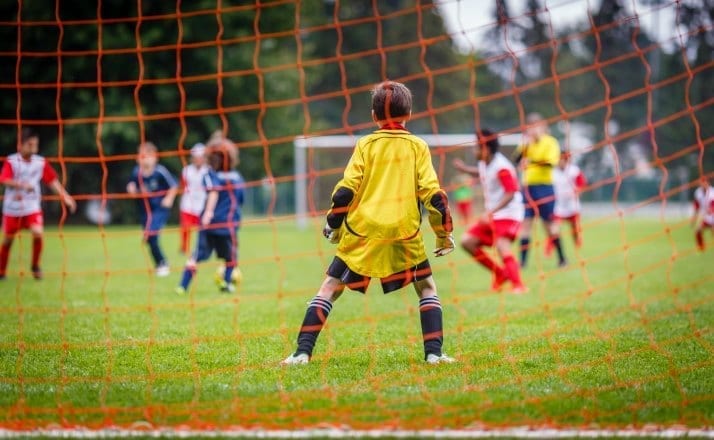 I want my kids to look forward to going to their extracurriculars.

I want their confidence to soar after wanting to work hard—not by me scaring them to do so.

So, I’m going to do my damnedest to stay out of it by letting my son’s coach, coach. I’ll fail some days, I’m sure. Staying quiet has never been my forte. But if I try to keep myself in-check, hopefully it will rub off on my kids.

They’ll feel my encouragement instead of my disappointment after their games. I’ll listen to them instead of lecture them by giving them a play-by-play. I’ll let their coach do that. And in the meantime, I’ll continue to say, “Have fun,” before my son’s games, and hope that he always does.

Moms Get Together For a “Fiel…

Are you feeling a little stabby these days? Like, if one more person chews like a beaver at dinner you … Read More