Growing up, my parents called me “Sybil.” I had no idea who she was (apparently an old movie character?) but I did know that what the label implied wasn’t exactly a term of endearment.

Being a highly sensitive child, I would jump from one emotion to the next at the drop of a hat, sometimes for what seemed to them like no good reason at all.

My mom insisted I was always overreacting or “being dramatic” but really I just felt like the world was punishing me for having feelings. As I grew older, I gravitated towards helping professions. I am an empathetic person who always tries to see the good in others and isn’t quick to judge.

I also wear my heart on my sleeve and while I was married this didn’t seem to cause me many problems, but as I’ve since divorced and started dating again, I have found that this brings me more opportunities to get hurt.

Being highly sensitive means, I can be “too much,” it seems.

It’s also painfully hard to find someone who appreciates you for your strengths when you’re a person who feels things (good and bad) ever so deeply.

As a parent, this means I am open-minded and tend to give my kids the benefit of the doubt. I listen when they have something important to say and I want them to feel as if their feelings are valid and understood, even if they might seem irrational in the moment.

One of my children is trans and I believe it’s my highly sensitive personality that made it possible for me to make a quick transition from concern for him and what the world would think to support/affirmation and 100% acceptance when he came out because I knew ultimately that’s what he needed.

It also means I get especially offended by family and friends who DON’T offer him that same support because it feels like a direct insult to him and a personal shot at my ability as a parent to make decisions in the best interest of my child.

Feeling this way as a person is exhausting, but it’s especially tiresome as a parent. Even more so when you happen to have a child who has the exact same personality as you.

When I see my son acting “dramatic,” explosive or what appears ridiculously out of proportion emotionally to the event that caused his reaction —  it triggers me. Because I know exactly what it feels like inside to spiral out of control so fast that your mind and your racing heart can’t seem to catch up with each other. I want to make sure my child knows it’s OKAY to be highly sensitive though.

I know the kind of reaction I got as a child from my parents and family when I would act this way and I want to make sure I don’t send that same message to my kid.

It’s a message that is received as you’re not worthy, you’re not good enough. You’re not loveable.

My middle child is the reason we are getting in the car minutes from being late to school every single day, even though it’s been hours since we woke up that morning.

He is the child whose clothes I have trouble handing down to someone else because there are no tags to reference the sizes.

He is quick to react, extremely emotional over what oftentimes seem like the silliest reasons, he can be shy, he’s compassionate, he loves intensely and when he feels hurt it cuts deep into his little soul. He is me.

When he was little, he showed such a natural and genuine empathy towards others because he is highly sensitive.

That made my heart smile. I had never encountered someone so tiny with such a clear and deep understanding of other’s feelings. If people around him were sad, he picked up on it quickly and you could see the pain in HIS eyes as he would reach out for a hug or gently squeeze your hand.

My son still climbs into bed with me at night and will wake me up and say, “hi mommy, I’m here for you” as if I’ve been waiting all night for him to wander in. He will rub my cheek, give me a hundred kisses, and snuggle in close because he yearns for approval and deep connections with others.

And it’s in these feelings that we find common ground and compliment each other most.

But, if I get upset with him, it’s a direct shot of rejection straight to the heart. You can see the physical pain in his eyes as his expression turns to one of dread and his eyes well up with tears.

He becomes angry and explosive because he feels rejected and hurt. For him, disappointing me creates intense anxiety so he lashes out. Later, he realizes how awful his outburst was towards me and he apologizes (repeatedly) in ways that are truly genuine and heartfelt.

He IS sorry. But he WILL do it again. I know this, because I do the same. When we butt heads. I want to be the stern parent, he wants to be understood, but neither of us want to be a cause for someone else’s struggle … it’s a constant battle between our personalities, our minds and our hearts.

My son will go out of his way to make others happy because he is highly sensitive.

He is eager to please and not because he wants the validation, but because he never wants YOU to feel bad … even if that means his own needs and feelings get pushed aside.

It’s excruciating to watch because I live this way too at times. It’s not until I’m entrenched in unwanted, negative thoughts and drowning in self-doubt that I realize I have – once again – disregarded my own needs to make someone else feel good about themselves. 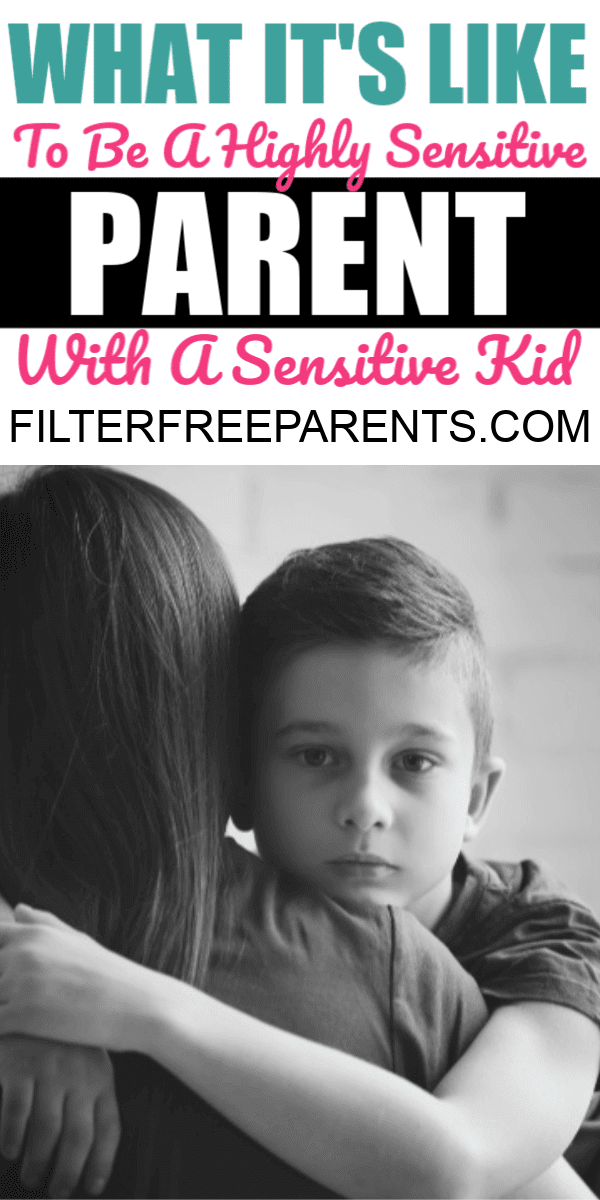 Aside from the relatable pain, it’s exhausting. Being a highly sensitive parent means the overwhelming chaos of the day sometimes makes my anxiety skyrocket.

My kids might just be playing but if they get loud at the wrong time, I might snap for no good reason whatsoever. Because, for me, it’s like nails on a chalkboard … but amplified by 100 and streaming directly into my ear drum in digital surround sound.

And when I snap, I feel immense guilt for doing so and I just can NOT seem to let go because, I’m not good at that either. And while I’m obsessing over all the ways I could (and should) have done better as a parent, I’m convincing myself that I’m not cut out for this. I’ll never be good enough.

It’s a vicious cycle, meanwhile, my child is having the same experience internally and I want nothing more than to show him that everything is OKAY.

I want to teach him how to embrace his strengths as an empathetic and compassionate human because that’s what truly makes him special.

Getting out of my own head is difficult, but I think as hard as it is to watch my son struggle like I do, teaching him how to embrace the pieces of him that make him unique and special has made me reflect on how I really do have more to offer the world than just feelings of inadequacy, emotional triggers and overwhelming self-defeating thoughts.

Being a highly sensitive parent means that at the end of the day, I’m emotionally, physically and mentally drained.

And I don’t think that piece is ever going to go away. At least not for me. I can only hope that I’m able to help my son realize his extraordinary personality might be exhausting and painful at times, but the reward is a deeper love and understanding of the world and the people in it that can’t be taught.

When you become a parent, you have plans. You intend to run your household like a well-oiled machine, keeping things … Read More