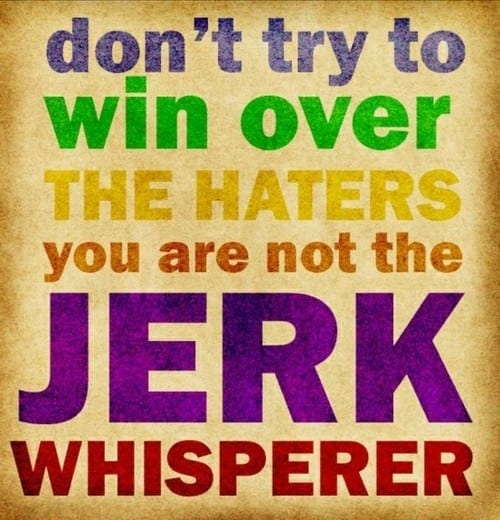 This isn’t a happy post. This is a “you can bite my butt cheeks and like it” post written specifically for the people who have called me a “jerk” in the last few weeks. Oh, yes, yours truly has been called a J-E-R-K at least three times that I can remember and once by my dog. Well, with the dog it was more of a “You’re a real jerk” look than her actually speaking and saying, “You’re a real jerk.” It happened when I didn’t open the sliding door wide enough for her to shimmy outside and her ass got stuck. It’s not my fault she’s built more like Nicki Minaj than Gwyneth Paltrow. It was cold out! I was trying not to freeze my own ass off while hers was officially getting hung up. But anywho. This isn’t a happy post.

I’ve been called a jerk more in the last 14 days than I have in my entire life. I don’t think I’m a jerk and if you’re going to venture there, you might as well just go all the way and call me an asshole. I prefer asshole. I can earn being called an asshole. Jerk? I don’t fit the typical description:

an unlikable person; especially : one who is cruel, rude, or small-minded

Huh? No. That’s definitely NOT me. In my opinion, these are the real jerks:

Let’s start with this chick who snuck out of a place of worship with stolen cash. Who in their right mind goes into a church and steals money? My gawd (literally – if I were religious). That’s like going into a bowling alley and hitting baseballs down the lane. You don’t do it! She’s a jerk.

At the entrance of this school, it says JERK. On this teacher’s license plate, JERK is written in big bold letters. Reporting and then suspending a little boy because he supposedly shaped his Pop-Tart into a gun and said (OMG!) “Bang! Bang!”, you’ve got to be a whole buttload of jerky. I think the little girl sitting next to him shaping her Pop-Tart into a Barbie doll should also be suspended. After all, she forgot to dress it. Boys will be boys. For the record, he claims he was making a mountain.

Ever hear of the Solid Gold Bomb clothing company? No? Be glad you didn’t. They’re the poster children for Jerks after creating a line of t-shirts promoting violence against women. With slogans like “Keep Calm and Rape a Lot”, “Keep Calm and Hit Her,” “Keep Calm and Knife Her” and “Keep Calm and Punch Her,” it’s no wonder Amazon removed them immediately upon discovery. Not only are they jerks, but they should burn in the far depths of hell for even thinking of spewing such hatred.

And that brings me to the ever-popular, Marissa Mayer. Mz. CEO recently banned telecommuting for all Yahoo! employees. Her reasons for doing so were not all that compelling. In my opinion, the woman is a jerk. She’s not all that likable and DEFINITELY small-minded. Isn’t that the true definition of jerk?

As for me, I don’t consider myself a jerk. Have my hormones had me stomping around like a Yeti with a toothache? Probably. And for that, I apologize. Next time, however, call me an asshole – it’s accurate and lightens the mood.