In the age of non-stop technological advances that we are living in, anything we could ever want and need have become instantly accessible by just a simple click of a button or swipe of our fingers.

Which is super convenient for things like groceries, toilet paper, shampoo or a last minute birthday gift.

If you aren’t barking out your grocery list to Alexa while you rid your fridge of last week’s leftovers and that organic kale you PROMISED yourself you would actually eat this time before it went bad (spoiler: you didn’t), you aren’t living life to the fullest, friends.

I can’t tell you how much more convenient my everyday life has become thanks to the tiny robotic “dots” scattered around my house chiming in with reminders, notifications and delivery notifications throughout the day But, like most seemingly perfect comforts, there’s a catch.

Many of these devices wouldn’t capture user’s intrigue if they didn’t have some added element of entertainment (remember the Blackberry? Yeah, me either).

One mom’s kids figured this out, and had a blast making flatulence echo through the Echos of her house.

Anyone who has ever met a child between the ages of 3 and 103 knows that their jokes hinge on a finale of fart sounds or the word “butt,” that’s why Emily wasn’t surprised by the symphony of butt trumpets serenading her through her daily chores.

That is, until she realized making Alexa “cut the cheese” was costing her actual cheddar.

Once Emily realized she had been charged for the app her kids had been using to recreate the “blame it on the dog” soundtrack, she contacted Amazon for a refund.

Apparently she’s not the only user who this app dropped a bomb on, other reviewers who knowingly downloaded the app gave words of warning for future fart-enthusiasts:

It’s all fun and games until your bill shows up and you realize the time your kids spent with your robot babysitter probably cost just as much as an actual babysitter, and with the real deal, you get to leave the house and enjoy the aisles of Target, ALONE.

And it appears that they aren’t the only parents out there who have been duped by the “free” big fart alexa app. Although based on reviews it seems this may be easier to accidentally activate in the UK since they had more complaints than US customers.

MFaull is at least relieved it wasn’t a lot of monty. But yes, still check your bills, people. And then there’s my personal favorite – a review indignant that she could have gotten her husband to fart for them for free.

Even if you’re a fart noise enthusiast, $50 is a whole lot of dough for a sound my kids will make multiple times a day, for FREE.

While you’re scanning your digital downloads to see how many apps you’ve paid for unknowingly, be prepared to plummet right into the rabbit hole that is Alexa add-ons.

I spent at least an hour sifting through nightlights, weather updates, daily humor and inspirational quote applications I can enable on my Echo.

I can now make her, “Talk Like Snoop” and, yes, it’s amazing. I thought the WebMD symptom checker was a time-sucker, but this knocks that sucker right out of the park.

I might have been blown away by the abundance of awesomeness I unlocked while searching through the endless Alexa bonus offerings, but apparently my kids have been keen on this for some time as I also managed to unveil this gem:

Something my adorable angels had already enabled on our devices, and I had no clue existed. Brats. No wonder I’ve been feeling especially irritable lately.

I think we can all admit that Amazon has changed our lives for the better.

Christmas shopping will never be the same now that I can do it from my couch with no pants and a glass of wine and for that I say, THANK YOU SWEET BABY JESUS.

These new features (that probs aren’t new at all I’m just an old hag who takes light years to get with the times because, kids), has made sure I’ll never tire of Alexa anytime soon.

But, while I’m editing my grocery list to remove all of the “poop” “butt” and “moldy rat cheese” my kids conveniently included behind my back, I’ll also be taking some time to keep a close eye on my charges from now on, that’s for sure.

You can check your own bill by going to your order history and clicking on digital orders.

Because as Emily and other Amazon users found out – farting Alexa isn’t cheap.

For the last 3 days, all the Alexa's in the house have been farting. Turns out, I actually paid for this to be happening. Anyone want 2 kids? ?? 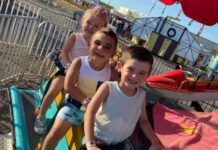 17 Hilarious Tweets That Sum U…


Does Swimming in a Pool Really Coun…

There are two kinds of people; those who understand that swimming in the pool counts as a bath (no matter … Read More