Teenagers occupy a strange in-between world. They are no longer children, but they are not yet adults. They are quick to abandon “babylike” things, then almost as quick to regret that they have done so.

It is during the teen years that many of us start to wonder why we ever wished so hard to grow up faster.

Trick-or-treating is something that many kids look forward to for months.

They spend hours thinking about how they want to dress, often coming up with bigger and better ideas each week leading up to Halloween. (I learned early on to not buy or make the costumes my children asked for in August or September, realizing that it would likely change a few times by mid-October.)

One day they won’t want to trick or treat anymore anyway.

A sure sign that they are growing up is when you ask what they want to be and you get the answer, “Nothing, trick-or-treating is for little kids.” I have to admit, the first time I heard this, my insides lurched. 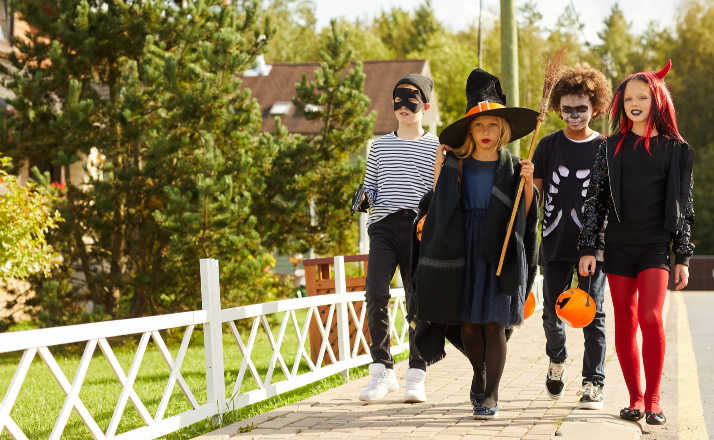 My babies were growing up, much too fast, and they wanted to rush the process. Knowing that I made a similar proclamation, and then made a game-time decision to go out on Halloween, I told them to keep the option open. I said, “You can dress up anyway.

There may be parties, so what do you want to be?” (Full disclosure, I love Halloween and have loved making costumes for my children. Though I have lost sleep and shed tears in that last week of October, I enjoyed it when they challenged me to create something out of the ordinary.)

Halloween is for everyone

Many adults think that once a child reaches a certain age or height that this fall ritual should end. They see trick-or-treating as an activity for small children and think that older kids are being greedy.

Though the candy is a motivator, most teens just want to dress up. In fact, I have seen many teens hand off their candy to younger kids as they are walking away from a house.

Dressing up is fun. It is not often that we have the opportunity to pretend to be someone else, if only for a couple hours. For us and our neighbors, Halloween is a community event, one of those days that we catch up with the people a block or two over, when we see how much the kids have grown. Parents have also been known to dress up and it is fun to see what they dress as each year.

Personally, I like to see teenagers at my door on Halloween.

Some years, it was the impetus that got my own kid out the door (rather than moping around at home), if only for a short time. When the kids were little, we divided holiday tasks: my husband handed out candy at our house and I walked with the kids.

At some point over the years, he decided to bring back the traditional concept of trick-or-treating, insisting that kids do a trick for a treat.

Though some are surprised at this, the kids remember it and in later years have come to the door with something prepared (and sometimes an unsuspecting friend). Teens can be shy about this, but we also have been entertained with songs, dance moves and handstands.

I vividly remember the first Halloween I thought I was “too old” for trick-or-treating.

I had a friend over and after the first few rounds of witches and ghouls came around, we decided we were wrong, we really weren’t too old. I had a pirate mask from a prior year, and it wasn’t too difficult to come up with the extras to make that work.

My friend lived too far away to run home for a costume, so we improvised. We grabbed a black trash bag, created leg holes and tied it loosely around her neck. I think we added crumpled newspaper to fill it out. The image of her walking down the street in this costume and the answer when people asked what she was “A bag of trash, of course,” still makes me laugh.

Today, more so than ever, kids are growing up too fast. If they have a costume, no matter how lame, I’ll give them some candy (especially if they are willing to show us a trick.)

Disney is the go-to for family-friendly entertainment and for good reason; it officially owns our childhoods. However, its most recent … Read More

I was 8-years-old when Cabbage Patch Kids were all the rage. There was nothing, and I mean nothing, I coveted … Read More