To the mamas that feel like at any moment it could fall apart, you’re right it probably could.

We are the glue. We are the ones that are holding it all together.

We’re holding the calendars in our minds, and the schedules in our phones.

We’re holding the big emotions in our hearts that these little people we’re raising have. And those emotions only get bigger as they get older, and our job to hold it all together feels impossible. Because it is.

We’re holding the trash they hand us at the park, and the chewed up gum. The snotty tissue they blew into, and sometimes – yes – even the vomit. Because a mom’s instinct is to catch even that.

We’re holding sit down talks about the hard stuff like hurt feelings, and the opposite sex, and why it’s important to forgive.

Moms are the holders. And, it’s a burden every mama feels in the depths of her soul. 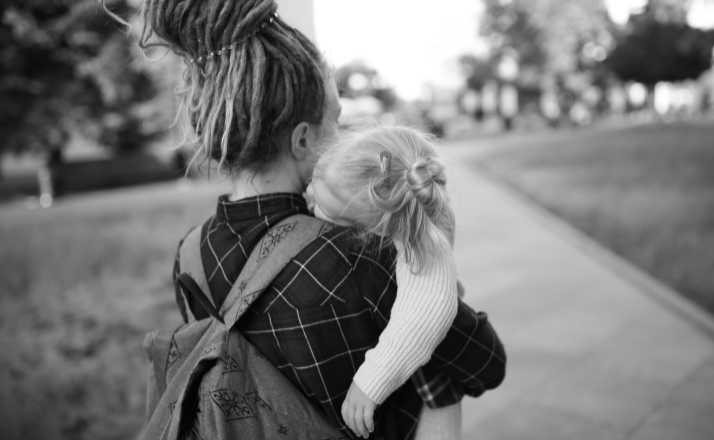 To be the holder means that you are trying so hard to make sure everyone is in the right place literally and emotionally.

You see, without the holders, it probably would fall apart, and that’s maybe something no one ever told you about motherhood.

The holding gets heavy, too. When they are colicky babies and need to be held all day to when they’re toddlers and still want to be carried. Then one day they’re teenagers and think they don’t need to be carried anymore. But, you’re there, waiting to hold them if they fall apart.

And, the holding keeps you up at night because it’s a constant balancing act of who needs you more and how are you going to remember it all, and do it all, and be it all to these other humans that expect you to be always be there.

To be the glue. To hold it all together.

Some days, you do it gracefully and it feels like you are super glue, and other days you’re more of a cheap brand of scotch tape that you think won’t last another minute.

But, the beauty of the mama of the family, the holders if you will, is that every single day we are still there. Hanging on. Lifting up. Trying hard to keep it all going with whatever we have in us that day.

We’re holding strong even when it gets tough for them, and tough for us.

They know that even though they are getting heavy, you’re ready to patch it back together, stitch it, tape it, glue it, fix it, and keep it all together.

And, yes – at any moment you’re worried it’s going to fall apart, because maybe you’re feeling like your arms are about to give out.

Maybe you’re feeling like whatever brand of glue you are today can’t hold on another second.

But, it always does. That’s the beauty. The mama’s arms are always there, holding it all together even when we’re falling apart. And, even though you realize it’s all a fragile creation that you really don’t have that much control over, you’re willing to try to hold it all.

And, they know that.

That’s what makes you the most reliable glue on earth.

To the mamas that feel like at any moment it could fall apart, you're right it probably could. We are the glue. We are…

Posted by Perfection Pending by Meredith Ethington on Tuesday, November 26, 2019

“She Would Scream In Pai…

Amazing Dad Spends All Of Chri…