“Oh, but sports are so important!” my friend said, sitting at the picnic table with me, while her popular, polite, athletic pre-teen son stood coolly nearby, and her freshly minted kindergarten son ran around on the playground equipment with my four boys.

“Yes, but they don’t really want to do sports,” I said.

“I would make my kids! It’s so important! They learn good sportsmanship, teamwork, responsibility, and hard work!”

But even as I politely agreed, I had one of those nineties sit-com memory flashbacks, where everything gets blurry and bubbly for a second, until the past comes in bright and clear.

Because, oh yes, we used to think the way my friend thought, once upon a time, not so long ago.

My husband, while not a star athlete, loved football and basketball. He observed that his children weren’t interested in tossing around a ball with him, but he thought they might develop an interest in sports with the proper encouragement.

Thus, we came to a point in time where we spent two springs and two falls hustling three kids from place to place, trailing their baby brother behind us.

That first year, we stumbled through, showing up with a kid in the wrong jersey, looking blindly around for his team, five minutes late, before we peeled out of the parking lot to rush another kid to a park across town to repeat the scene so that the entire community was eventually witness to our ineptitude.

But, yay! We learned! The next fall, I sorted through three schedules, and emails from three coaches to make an Excel document that would make an executive proud. All it lacked was a pie chart.

As we now glided from field to field with a little less flyaway hair and a tagalong little brother usually clothed, we began to fully notice what was going on. With three players, we were still often the last to arrive.

As I traipsed past the parents in their foldout camping chairs with my luggage of chairs and toys to keep the preschooler from running out and getting pelted with a flyaway ball or a runaway player, I observed how sedate the parents looked and then how very engaged.

When I finally sat down each time, it was with a sigh of relief.

My oldest son, usually an introvert, had turned into the on-field peanut gallery, yelling asinine comments at the opposing team and his own team alike while standing in one spot the entire time he was on the field.

While other parents were cheering on their kids to shoot, we were doing our best not to die of embarrassment, while hollering “move!” because any movement was preferable to his immobile status on field. Neither the coaches nor the players were particularly fond of our inexperienced, on-field sports commentator.

They dribbled around him and generally ignored him.

Our next oldest, an extrovert, was nevertheless completely unmotivated to be socially engaged in the unfolding drama of the field.

His imagination is the sort of domain that contains universes of magical worlds. While the entire team dribbled and passed downfield, he loped through the field like a butterfly, oblivious to which way the ball moved.

We even stooped so low as to offer him money for a certain number of toe touches per game. “Just get your foot on the ball,” we pleaded.

So occasionally, he’d reach timidly through the fray and delicately touch the ball with a single toe while we glowed with pride and all the other parents wondered why he didn’t propel it towards the goal.

Again, his coach accepted that he was part of the game and kept him politely in the rotation, while realistically expecting nothing and receiving nothing.

Off-field, he was quite popular, making up games with his teammates that frustrated his coach because they distracted the players from the on-field activities and sometimes resulted in water spills or mild injuries. 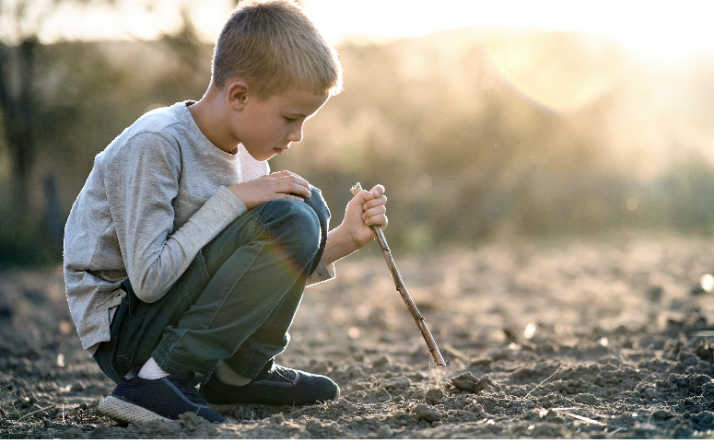 And then along came our third son.

Both a social and an athletic human from a very young age, with a competitive streak bred from keeping up with brothers two and four years his senior, he seemed ready-made for the life of a student athlete.

This was his destiny! And, in fact, he didn’t disappoint!

On the field, he followed directions, he moved with the flow of the game, he aggressively pushed into the huddle of inexperienced players and moved the ball purposefully. He was good! He played hard and he played happy.

He had potential like we’d never seen in our progeny before.

That was, until the next time he had to go play and he dragged his feet, cried tears of desperation, and moaned about having to go.

“But you like it!” I reminded him, tossing cleats at him and pleading with my eyes for him to hurry up.

“I don’t want to go!” he’d moan for the one thousandth time, like we were taking him to be tortured.

And then we’d get there and he’d play well and have a great time . . . until we had to repeat the whole process again the next week.

When spring soccer was canceled from the pandemic, I felt sorry for all the other parents who were financially and emotionally invested in it.

Oh, but was it liberating! It was a glorious and much-needed end of an era for us.

The memory ended and my friend came back into focus and I smiled to support her.

But I rested certain in the knowledge that my kids are simply going to have to learn good sportsmanship, teamwork, responsibility, and hard work somewhere else because clearly the world of sports wasn’t meant for a family like ours.

The other night, I had “The Talk” with my eight-year-old daughter. Not THE talk. That will come later. This “Talk” … Read More