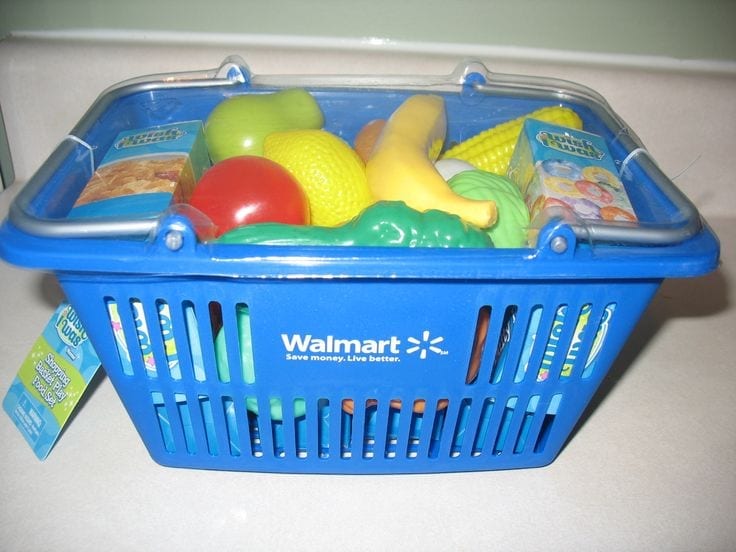 “Aless, I can’t open it! It’s a fake can of peas!” I fired back. “It’s plastic and all molded together. It doesn’t open!”

As if this would have ended the war with my stubborn, sleep-deprived toddler.

Red was clouding my vision. Anger morphed into lunacy. I reached for the nearest serrated butcher knife and began hacking away. “God damned, Santa,” I muttered to myself. “Had to bring an entire basket of fake fruits, veggies, and canned goods into this house. I’ll leave him rotten fish and Blue Moon beer next year.” Of course, Santa being my husband.

“Do you see this? This fake can,” I erupted. “Do you see any peas inside? Huh? Tell me. What’s inside this ridiculous, sawed-in-half can of non-existent peas, Aless Rayne? What’s inside?”

I was out of breath, standing there holding a wretched can of invisible peas. A plastic container of nothing that we had battled over like Fort Knox. For days, I would not give into her demands, until… scary woman with sharp object.

“Thank you, Mama!” She was obviously thrilled with the outcome, running off towards the living room while pretending to eat the peas.

I wanted to chase her down.

To make her eat real peas.

Because she’s so obnoxious.

Three days of temper tantrums. Over a plastic toy made in China.

A metaphoric sledgehammer struck me in the head as I watched her throw the chewed, mangled plastic into a corner in favor of a purple ball. A PURPLE BALL!

In less than three minutes, days, hours, and endless moments of kicking and screaming came to an end. She had won the battle. The little witch took Fort Knox.

If I had just listened to my husband, I thought to myself. He was the one who suggested that I toss the can into the trash when she wasn’t looking. But how could I do that? How could I ruin her pretend-shopping fun?

I’ll tell you how… sanity. Keeping the peace. Not turning into Mount Saint Whattabitch for the sake of preserving a toy shopping basket full of shit.

My husband was right (don’t tell him I said so). This was a battle that I would’ve never won. It’s also a lesson, and one that should have been drilled into my head after having five kids:

As parents, we need to carefully and strategically pick and choose our parenting battles. Some are worth the fight. Others have Asian factory workers snickering as they pack boxes of toy veggies. They know what lies ahead y’all. And it ain’t pretty.

Now excuse me while I go apologize for raising my voice.


Booty Beauty Is The Latest Trend &#…