Ho Ho Holy mother of God, this is debilitating. Nobody warned me that once you become an adult the holidays suddenly morph from a mystical and magical experience to one filled with sleepless nights and depleted bank accounts.

As a kid, I could never understand how The Grinch could be SO miserable about the enchanting season that is Christmas.

That is, until I grew up and had to shop, cook, clean, decorate, trim trees and wrap and return gifts like a jittery, caffeine ridden helper elf. Now that I’m older, I’m starting to think The Grinch is just every MOM during the weeks leading up to Christmas morning.

I’m grouchy.  I’m tired. I’m on the verge of a massive meltdown over a doll the size of my palm that my kid desperately wants but NO STORE SEEMS TO HAVE IN STOCK.

The holidays are quite literally SUCKING MY SOUL DRY.

The physical exertion of dressing your house up like Santa’s village, bringing in a giant LIVE plant you couldn’t even keep alive on a GOOD day, mountains of cardboard box deliveries, and everything in between is enough to make anyone want to fall into a forever coma.

Spending time with family can be a blessing, and a curse.

On any other day of the year you can dip out early, blame kids sports, work or ANYTHING ELSE on why you can’t make it to an event.

During the holidays, you’re fresh out of excuses and if you don’t show, you’re an asshole.

But it’s not just one day, it’s a string of days and nights and weekends and before you know it you feel like you’re on the next Survivor and the only way off the island is to make it to New Year’s Day in one piece.

It’s a season of traveling, social anxiety, many, MANY (SO FUCKING MANY) days home from school and a house full of clutter and reminders that you have spent FAR too much money for one day out of the year.

If you don’t feel like an empty shell of a person filled with carbs, guilt and anxiety during the holidays, then I need your tricks STAT.

Every year I push myself to the absolute limit the entire month of December. My house screams Christmas spirit, but inside I am desperate for a hot bath, a pedicure and a 45 day all expenses paid trip out of the country by way of fake passport and a stack of cash… is that too much to ask? 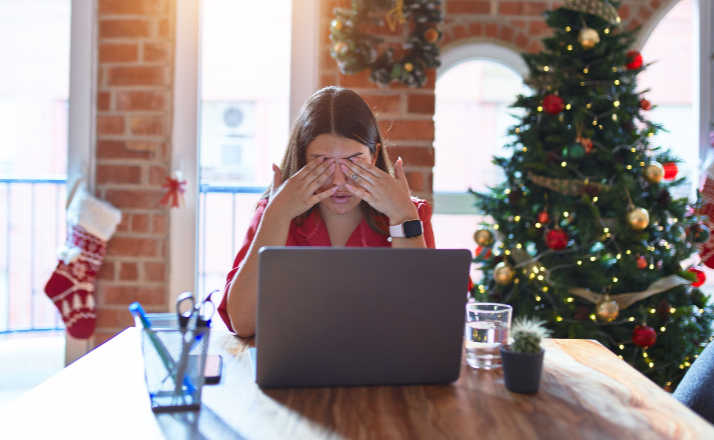 This seasons is supposed to be joyous, right?

This season is supposed to be about giving and gratitude but the only thing my kids have mastered bestowing on others are their germ filled boogers, resulting in a vicious cycle of each member in our household going through the same goddamn cold on loop for two months.

As for gratitude, the things I seem to be thankful for these days are online shopping, noise cancelling headphones, wine, and the fact that my kids still believe in Santa so at least I can continue to threaten them with his eyes watching since apparently my eyes bearing witness to their bad attitudes no longer seem to phase them in the least.

As if the holidays aren’t overwhelming all on their own, some idiot had the bright idea to bring a freakin elf into this house (spoiler, it was me. I’m the idiot).

Like I needed another reason to feel like a utter failure during the “most wonderful time of the year,” now I have a little red cotton-stuffed one that reminds me every night as I’m about to fall asleep that I can NOT get my shit together to save my damn life.

That little fucker is about to get tossed to the dog one of these nights in hopes she “accidentally” tears him to tiny, plastic and felt shreds while we all sleep.

Not that my kids would give a shit.

These days they are so engrossed in video games, YouTube and adding completely unattainable items to their never-ending Christmas lists and INSISTING that they are NO problem for “Santa” that I’m fairly certain if they found their direct line to Big Guy gnawed into oblivion — it wouldn’t scare them into submission anyway.

So much energy and prep goes into this season that at the end I feel like I can’t possibly do this all over again just a year from now.

But I’d be lying if I didn’t admit, for those few moments right as my kids wipe the sleep from their eyes and mine come into focus after getting just an hour of sleep the night before, it really is magical …  suddenly the whole month of what felt like hell on earth seems to completely vanish.

At least until it hits me that the mess of tumbleweed-like wrapping paper rolling through the house leaving streaks of tape stuck to the carpeting is going to be MY job to clean up.

But that’s not what I’ll remember come fall next year when I gear up to repeat this whole shit show for another time.

I’ll remember the way they sleepily stumbled down the stairs on Christmas morning. The look on their little faces as they lit up with wonder and excitement.

Their actual gratitude when they find they got the one thing they really wanted from someone special … and that someone was me.

I’ll remember how they each had a handmade gift they poured their little hearts and souls into that they carefully passed over to me with such anticipation that they couldn’t even contain it and blurted out what was inside before I even had a chance to remove the bow.

I’ll forget ALL of the bad stuff that leads up to those few hours once a year where my family seems complete, my kids are nothing but perfect, and there isn’t a thing in the world that could take that away from me. Not even the demon elf I will inevitably spot still sitting on the mantle during breakfast because I forgot to put him away last night when “Santa” came.