I’m in my forties, and let’s be honest, I’m still not bully-proofed. Words still cut me deep. I still lash out in defensiveness when someone is mean to me. I still cry and get hurt. So, is it really possible to bully-proof our kids? When I hear advice on bully-proofing our kids, I think we’re missing the point.

I think as parents, we need to define this one, because so often we rush to call something bullying when it’s not. Teasing is one thing, bullying is something entirely different.

Every kid teases other kids. It’s a natural part of their development. Kids are mean, and as parents, we need to steer them back on course. Teach them that their words can be hurtful, or picking at someone isn’t fun when you’re on the receiving end.

According to StopBullying.Gov, bullying is characterized in this way,

“Bullying is unwanted, aggressive behavior among school aged children that involves a real or perceived power imbalance. The behavior is repeated, or has the potential to be repeated, over time.”

So, it is not your typical teasing. It’s aggressive. It’s repetitive and there is a power imbalance.

Not every kid that is being mean is bullying other kids. 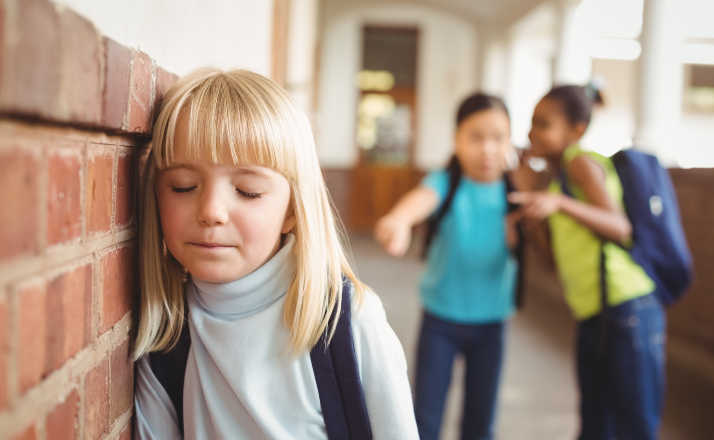 But, teasing hurts too, let’s be honest.

It’s hard when we see our kids get hurt by their peers. Heartbreaking, really. In fact, I’ve cried just as many tears as the mother as I think my kids who have been teased or mocked or picked on. So, can we really “bully-proof” or “tease-proof” our kids?

A recent New York Times Article suggests some ways to bully-proof our kids. The big take away though is to teach our kids to not get upset when kids lash out, and therefore the child wins, and the bully stops.

I just don’t think bully-proofing our kids is that simple.

Bullying can look very different depending on the child, and the situation.

I’ve had two of my kids get bullied, and I have to say that since one is a girl and one is a boy, bullying can look very different between the two sexes.

My son was bullied by being repeatedly pushed down every time he tried to stand up. He tried using his voice to say stop repeatedly. He spoke up. And, the bully just would not stop. Finally another student went to get help.

This kid wouldn’t have stopped even if my child had pretended not to be upset.

In another situation, he had a friend that was using the silent treatment on him. For days. He was heartbroken wondering what he had done wrong, and even tried to speak to the kid and fix the situation. The kid was asserting power over my son by treating him like an outcast.

My advice to him was to ignore it and eventually the kid did come around, but it was hard on everyone until it fixed itself.

My last example is from my daughter. Girls are aggressive in their own unique way. They use words and cliques and you can’t play with us type of aggression to put someone in their place. I saw examples of this over and over starting in Kindergarten. Girls can be ruthless with their words, and just ignoring a behavior doesn’t make it always stop.

My point is, bullying isn’t a one solution fits all type thing. It’s impossible to bullyproof for every situation.

While pretending like you don’t care is OK advice, it’s really not that easy for children. And it doesn’t always work.

Kids aren’t emotionally mature enough to be like, “You know Carly, I don’t really care if you think I’m fat and ugly. You have the right to think that.” and walk away.

I’m not even sure I could do that if someone called me fat.

My point is – we can preach all day to remain calm, and to act like they don’t care, but that’s teaching them to hide their true emotions which I don’t think is helpful to developing their own emotional maturity.

Kids vary greatly in their emotional development and maturity.

Some are more sensitive. Some don’t give a crap what you think about them, and can let things roll off them easily.

My middle child is highly sensitive, whereas my youngest could probably take a punch to the gut and be like, “Dude! Why would you do that?” and move on with his day.

Here’s what we should be doing instead of trying to bullyproof our kids.

We should teach our kids to speak up and stand up for others.

Bullies will stop bullying when they have a good example from peers.  They need to witness their peers doing the right thing. Sometimes when your child tries to ignore the situation or act like they don’t care, kids will not stop. Bullies can be relentless.

But, if more parents teach their kids to stand up to bullying, a lesson from their peers can be impactful.

We should lead by example.

Adults can bully too. We do it all the time in the way we interact with others in our environment and our kids are always watching. The bullies learned the behavior from somewhere, and it’s important to practice kindness if you want to breed kind children.

We should teach our kids that bullies might be hurting and it’s not about them.

Kids lash out oftentimes because they themselves are going through something. Share that with your kids in a way that evokes compassion in your child instead of telling them to just ignore a bad behavior without explaining what might be going on with the other child.

We should let our kids solve their own problems with friends as much as possible.

I’ve had to learn this the hard way. It’s not easy for me to not get involved but I find that 99% of the time, my kids can work it out on their own. Check in with them at home. Role play. But, don’t text the other mom at the first sign of trouble. Teach your kids how to solve problems with their peers. It will only help them in the future.

We need to build up our kids’ self esteem at home.

Kids need to know they are loved and that they are safe. Home is the best way to drill that into our kids so when they go out into their little world away from us, they have the confidence to be kind, turn the other cheek, and stick up for others.

We need to build them up in a way that they are less likely to believe their bullies. We can do that first and foremost by spending quality time with our kids. And monitoring their interactions with social media when they’re at home.

It’s not that I don’t love the idea of bully-proofing our kids, I just wish it were that easy.

If it were, I would have done it years ago.

But, we’re in the thick of these hard years, learning to navigate the tricky waters of elementary and middle school, and there is no excuse for bullying and no way to really bullyproof your kids.

Words hurt. We’re human. Kids should be allowed to feel whatever they need to feel in the moment. And our kids sometimes just don’t get why others are so mean.

And to be honest, as a grown adult, I don’t either.

Men Are Shown A Speculum Picture An…