Several years ago, a friend posted a charming pregnancy announcement on Facebook. I wish I could say I responded with unadulterated joy — but the truth is, it brought up a whole lot of feelings … let’s just say … I wouldn’t call positive.

We had been trying to conceive after our first loss, and the day of this friend’s announcement was the day my body also obnoxiously announced we were not pregnant. It was “only” our second month trying since our loss — and in hindsight, I could say that wasn’t very long — but when you’re expecting a baby and then suddenly you’re not, time is relative.

This pregnancy announcement definitely stung. But not for the reason you might think.

I was sad for us. But not sad for her. I was angry at our journey, but not angry at her. I was tired and weary of the grief I carried, but I didn’t want her to have to carry any of it.

But I knew deep inside this person did not deserve any of my negativity around her pregnancy. All babies deserve to be celebrated.

And so — I wrestled.

I wrestled with my thoughts and feelings. I brought the deep feelings to the surface so I could explore them, confront them, understand them, and challenge them.

Realizing that this one post would spur nine months of posts of her burgeoning belly (back before “unfollow” was a thing), I prepared my heart for all the posts and all the triggers yet to come.

I spent this time, and all this emotional effort, because this person was worth it, and I knew this baby would be worth it.

And then she filled us in on a secret — her pregnancy announcement was nothing more than an April Fool’s joke.

My heart dropped, then bounced between anger, frustration, and betrayal. I felt like my deepest emotions had been taken advantage of. That they went unseen. 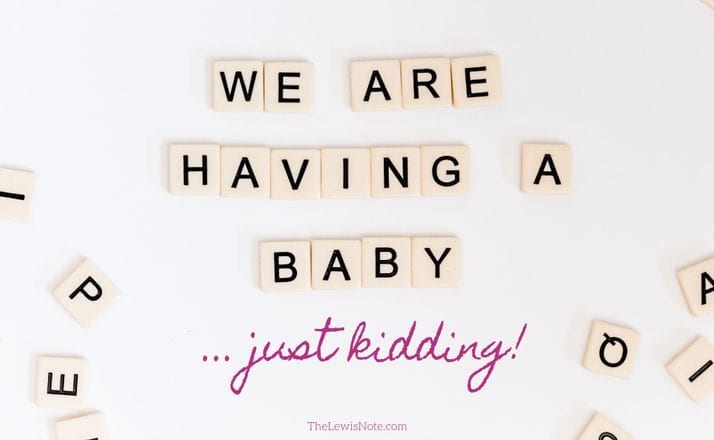 But please do not assume this indicates a massive character flaw on my part.

Can you see that the reason it was so hard was that I valued my friend, valued her baby, and valued the significance of new life? That these values paved the way for the deep and painful wrestling with the legitimate feelings my own loss has brought about?

Do you recognize the amount of time and energy it took to write “Congratulations!” while tears poured down my face for my own baby I wished I could hold?

Isn’t it possible that it is not anger at another person’s fortune, but rather deep mourning of my own misfortune, which prompted my feelings?

They sting because we value life — not because we take it for granted.

They hurt because we recognize that loss has changed us immeasurably, and we are no longer the person who can easily celebrate with others — not because we aren’t trying.

And when we’ve gone through all that emotional upheaval, to tap into whatever is left of our positivity and hope and wrestle anew with our own deep sense of loss, the last thing in the world we want to hear is that all of that wrestling was for nothing.

So when you post a fake announcement, I understand you are attempting to be funny.

But instead of prompting just laughter, you are also unwittingly prompting tears.

Not because your friends dealing with loss or infertility are bitter — but because they love you and are trying their hardest to do better. And finding out their hard emotional work to celebrate was all for nothing is a super low blow.

There are a million and one ways to be funny this April Fool’s Day. But fake a pregnancy announcement is not one of them.

Are you a woman grieving the loss of a child through infertility, pregnancy or infant loss, child loss, or loss in adoption/foster care? Join an online support group at Brave Mamas. Click here to join.