In the winter of 2004, I was a stay at home mom in the trenches of new motherhood. I was in the basement of our suburban Chicago home with my four-year-old daughter and eight-month-old son getting the space ready to host a play group session that afternoon. The group included a few neighboring moms and their little ones and was a big part of my weekly dose of fun. It was a time when I could converse with exhausted, sleep deprived mothers dealing with the same woes as me.

Those days my husband traveled extensively for work and the kids and I rarely saw him. A couple of storms, a long spell of frigid days and a spate of viral infections had practically trapped the kids and me indoors that winter. We had missed pre-school and play group sessions for a few weeks in a row.

At a time when tablets and smartphones did not exist, I had been elevated to the position of Chief Entertainment Officer of Munchkins Inc. along with the roles of Chief Nurturing and Cleaning Officer that I already held. The CEO designations were namesake ones. In reality the little monsters were in complete charge.

I spent most of my days reading and singing to the children, building towers with blocks, watching Barney on television and cleaning up after them. So deeply immersed into the world of diapers, drool and Disney was I that my identity had completely melted into that of my children. I had forgotten what it was like to be a strong woman with her own likes and dislikes. When Barney sang “Imagine all the things that we could be” I could not think beyond Munchkins Inc. I needed an escape!

That morning as I stood in the basement surrounded by the blocks, books and crayons my children loved, I made a mental note of all the chores that had to be done before our friends arrived. Though I was really looking forward to meeting them, the long list of things to be done weighed me down. There were dishes in the sink, there was laundry to be folded and put away and cookies to be baked before everyone arrived.

I wondered how my neighbor managed to keep her house spotless while raising her two kids. My house was a mess. It was only 9:00 am, yet I was exhausted. I was trying to wean my baby off my milk and that had thrown his schedule, and mine, completely off balance. He had been awake since 4:30 am that morning and every attempt at putting him down for a nap had failed. He wanted to be where the action was- in the basement. As I wearily sang ‘Clean up, Clean Up’ to coax my daughter into putting the last of the toys away I heard the phone ring.

It was my husband calling to check in on us.

“Daddeeee…. I cleaned up Daddy…my friends are coming today. Roshi and Vishy and Tanya and Neil… I ate flute loops and baby learned to clap his hands and mommy says he’s getting a new tooth too. Can we go to Disneyland tomorrow? Bye”, my daughter said all in one breath before handing me the phone.

“Hey babe… looks like you guys are having fun. I’m just stepping into a breakfast meeting with the clients. I’ll talk to you later? Miss you guys! Love you. Bye.”

Really? Why did he even call if he did not have the time to listen to what I had to say? To remind me of all the things I was missing out on? Frustrated with the diminished hope of having a real conversation with him, I hung up. My daughter quickly handed me a book.

As I read out the story of Franklin and his first day at school for the umpteenth time that week, my mind drifted to the exciting life my husband was leading. Why this very minute he was probably with a bunch of elegantly dressed co-workers discussing important deal clinching details over steaming cups of coffee and a platter of delish food. I had eaten mac and cheese with steamed broccoli for dinner three nights in a row.

He was jet setting, wining and dining and making important decisions. I was stumbling through the day.  What was I doing with my life? Would I ever again be able to have a conversation that did not include my children? Would I ever be able to feel confident about being in the corporate world again and voicing my opinion on issues that mattered in a board room? Would I even be able to think beyond pureed carrots and runny noses?

‘Phat, Phat, Phat’ my daughter tapped my hand hard to break me out of the reverie. I had been reading aloud in auto mode.

“You missed a page Mommy. Start over,” she said, a determined look in her eyes.

Darn! Why were children so smart?

This time I paid attention to the book and what I was reading, out of dread. I did not want to read it over one more time that morning.

I vacuumed the room as my daughter played peek-a-boo with her little brother who had been trying hard to finish the chocolate milk in his new sippy cup. His cackling laughter, deep from the belly, filled the room. Normally watching the two of them play melted my heart. But not today. Today I had cocooned myself in self-pity and was oblivious to the fun they were having. At one point, my son laughed so hard he lost his balance and dropped the sippy cup.

A giant blob of chocolate milk spilled on the carpet.

Just as quickly as the milk seeped its way through the layers of the carpet leaving behind an ugly stain, my pent-up emotions gave way. As I tried to vigorously scrub the carpet to lighten the stain I started to rant about how the sippy cup was not as spill proof as the manufacturers had claimed it to be.

The rant then turned into a self-deprecating talk on how miserable I was, not just how ugly the stain was.  I went on about how the cleaning had added to the jobs I already had to do. As I paused to look up at my children with tears in my eyes, I saw their big, brown innocent eyes filled with bewilderment. They were trying their best to comprehend my emotions. Was I angry or sad or just being dramatic?

“It’s just a stain Mommy,” said my daughter trying to figure out why the spillage had brought on such a fierce reaction, not knowing the series of thoughts that had transpired in my mind earlier. “Look, Mommy look! Baby stood up all by himself. At least now we can tell Daddy exactly where he stood up! Right next to where he spilled the milk! Good job, Baby!”

Wise words from a little one. While I looked at the blob as an ugly stain that needed deep cleaning, my child saw it as a memorable marker. She had a completely different perspective and I needed to make that shift in perspective to be happy in life. I could either choose to look at myself as a trapped housewife or a powerful creator of my children’s wellbeing.

Today when I see piles of laundry to be done I am grateful. After all, I would not be doing five rounds of laundry if we owned only one pair of clothes each or we did not have active kids. 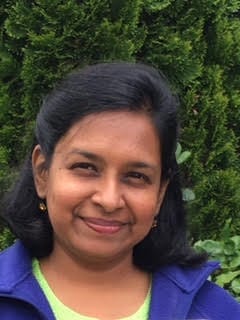 Vidya Murlidhar lives in Charlotte,NC with her husband, father-in-law and two teenage kids. Her passions include writing, dancing, baking, and energy healing. You can find her on her blog, Mommyhooddiary Her articles have been published in “Chicken Soup for the Soul- The Joy of Less’ and ‘Life Positive’- a spiritual growth magazine. She is also the author of an e-book- ‘The Adventures of Grandpa and Ray’ and is currently working on a series of children’s picture books. 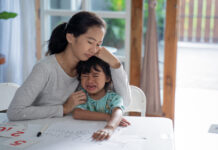 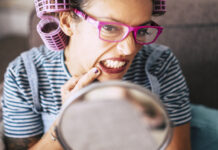 Aging is Tough. It Feels Like My Body Is Betraying Me At An Alarming Rate. 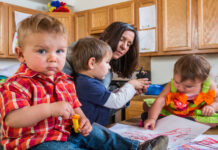 When You’re A Single Mom, There Isn’t Enough Of You To Go Around