Filter Free Parents
Home Mom Life Humor Guys, No One Assumes Those Tampons Are For You. No One.

13 years ago my wife sent me to the supermarket with a short list.

We’d been married just over a year. This was the first time she’d sent me to pick up a feminine hygiene product.

Next to “tampons,” she listed the brand, weight, length, durability, and a few other details on what she wanted. As I read through the modifiers, I was surprised that this was such a complicated thing. Before I got married, I never would’ve considered that a woman had as many options for hygiene as a car does engine oil.

But I suppose what really shocks me now, looking back, was the uncomfortable notion that someone might assume these products were for me. And to be honest, I don’t know why I made that assumption.

I don’t know why my face was flushed as I shopped, or why I waited until the end of the shopping trip to actually pick up the tampons so I could bury them at the bottom of the cart.

I mean, what is the male equivalent of this purchase?

Outside of underwear, my man parts don’t require any sort of regular appliance that must be purchased at a store. I can’t recall ever sending Mel to get me underwear. And I don’t play ball sports, so can’t send her to pick me up a jockstrap. If Mel bought me a jockstrap, would people assume it was for her? What exactly would it be supporting?

If you have an answer for that question, I’d love to hear it, because all of it isn’t logical.

I think the closest is condoms. I once asked Mel to pick up condoms. She came home, a little red-faced and flustered, and told me that condom buying was my job now.

The truly funny part about all of this is that usually when I buy condoms, I do it confidently, with a smirk, almost like I want the whole store to know what I’m going to use them for.

Somehow I doubt Mel has ever done that while buying tampons.

And listen, it’s not like I’m not sympathetic to her monthly cycle. I am. I have been married for over a decade now, and I have seen how uncomfortable it can get.

But I should also be candid here, as a man I don’t think much about a woman’s period outside of the times she is on it, or when she sends me to the store for tampons.

A few years ago, I went to see the Vagina Monologues in an attempt to better understand my wife. I laughed at the play. But at the same time, I felt a little queasy and wondered if my wife would ever make sense to me.

I felt that same feeling as I anxiously gazed the hygiene product lined up in the store, all the boxes pink and or soft green or baby blue, trying to make sure I was getting the right thing, while frequently looking side to side, feeling like an outsider, and wondering if the people around me were making assumptions. 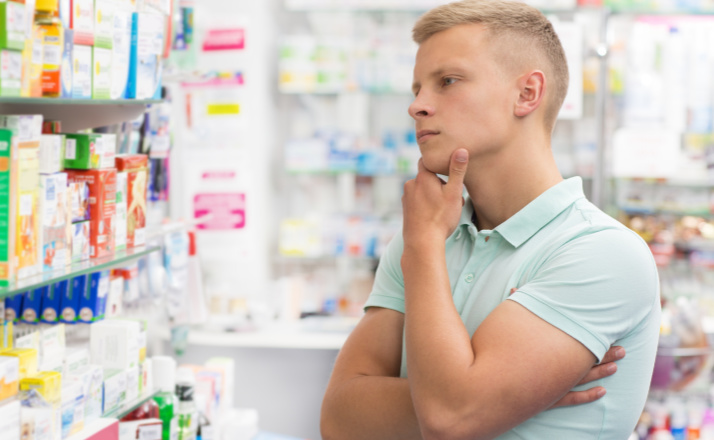 And frankly, assumptions could be made.

The normal assumption, and most truthful, is that I’m a married man, sweet and thoughtful, and willing to pick that sort of thing up for my wife.

But that assumption would take rational thought, which sometimes men do not use in these moments. I know, I am one. I can speak candidly here.

I assume that it shows how whipped I was (a term I hate, but frankly couldn’t get it out of my head at that moment). It felt like looking for tampons for my wife, and the mother of my children was some chip on my manhood, which looking back now, is just stupid.

And deep down, in the dark part of my brain, I also wondered if people assumed I was into some strange fetish involving tampons, and I’d one day be featured on a daytime talk show.

None of it made any sense, and what I really needed to do was just man up and buy my wife some tampons, without getting all stupid and neurotic about it.

I felt really nervous, so I bought a bunch of crap I didn’t need (a book, a wrench, a bag of south American candy, a toilet scrubber, and a toy car) so that I wouldn’t look like some creep. My hope was to overload the cashier with random crap so that the tampons would go un-noticed.

I made it to the register with my products. The cashier checked out my eclectic items, and once she reached the hygiene products, I felt like I need to say something to normalize the situation.

The cashier, a snarky, gum-chewing blonde in her late teens, gave me a twisted lip smile that seemed to say, “You know, you saying that makes me think that they are.”

I smiled back, and then she said something that I really needed to hear. Something that for whatever reason knocked something loose in me, and helped me to realize how stupid I’d been.

It was so candid and so frank, that right then, I realized exactly how stupid I’d been acting.

Now, after 15 years of marriage, I can go to the store, pick out the product Mel needs, strut to the register, and not say a thing. It can be the only thing I buy, and I don’t worry about. And every time that neurotic voice comes in my mind, where I get all red-faced, I hear the word “duh” and it all goes away.

So guys, if you are shopping for your wife, daughter, mother, whatever, don’t worry. No one assumes those tampons are for you. So just buy them and get over it.

Mom Of Child With Special Need…


I Have Lost Friends. I Have Hurt Pe…