If there’s one thing parents know about toddlers it’s that you never quite know what to expect. One minute they are sweet as pie and you just want to kiss their cute little faces off, the next they morph into pint-size dictators hell-bent on world domination.

One minute they’re telling you how much they love you, the next they’re screaming at you, “You’re a dumb doody head!”. They have been known to bring grown men to tears.

So when James Corden introduced his series “Toddlerography,” a dance class RUN by toddlers, all I could think was “You’re a brave man.” Or certifiably insane. Either or.

And it’s not just because toddlers are prone to crazy outbursts and unreasonable demands that make them questionable dance teachers. Oh no. Have you seen a toddler dance?

They’re all flailing arms and crazy legs. They fall down, they bounce back up, like one of those little bouncy balls that bounce forever.

An adult falls down and there is no bouncing. There are only lawsuits and potentially broken hips. There’s a reason the Life Alert was created (Help! I’ve fallen and I can’t get up!) and it wasn’t for toddlers.

Toddlers have bodies that are nimble and flexible. Adults not so much (unless you happen to be some crazy Yoga Guru in which case I’m super happy for you). I’m pretty sure that Gumby was modeled after a toddler.

Nonetheless, James Corden does this “Toddlerography” segment on his Late Late Show with James Corden and I hope he has his guests sign a waiver.

The premise behind the 3-minute skit is that James and a guest have to copy the dance moves of various toddler teachers/choreographers. James has previously done it with Jennifer Lopez, Gwyneth Paltrow, and Kate Hudson.

This week his celebrity guest was Justin Bieber. Bieber is set to launch his “Changes Tour,” and what better way to get in shape than with a lesson in what Corden touts as the “Toughest dance class in Los Angeles.”

Corden introduces the skit by explaining how insulted he was when Bieber shot down his choreography suggestions during Tuesday’s “Carpool Karaoke”. His retaliation is a quick turn at a dance studio.

The segment opens with the J-twins stretching at a barre. And there isn’t enough stretching in the world to prepare them for what’s about to come.

Because this little girl? She is FIERCE and honestly, I’m a little afraid.

But the Js are dressed and ready to go, so there’s no backing out now. James is channeling his inner Jane Fonda circa 1982 with his sweatband and Justin is bringing his A-Game to the party in sequined shorts and a tank top. Bieber eyes Corden and says:

“I’m just a little jittery man, these instructors, they don’t mess around.”

Actually, they mess around a lot. Hellloooo toddlers.

In walks toddler #1 and she is cute as a button, in a pint-size dictator sort of way. But when she asks “Are you wready?” It’s obvious that the duo is having second thoughts.

The track to Justin’s first hit song “Baby” comes on and the lesson begins. What follows is 2 and a half minutes of pure, unadulterated joy. And I dare you not to smile.

With each new teacher/choreographer it’s clear that when it comes to dancing, there are no rules. 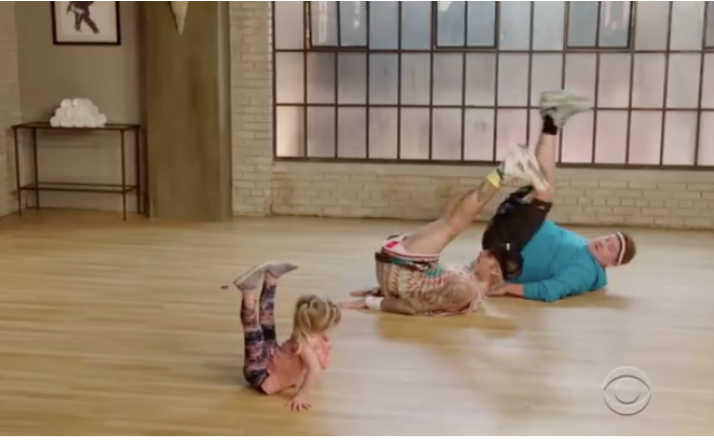 There is a lot of jumping and twirling. Even a cartwheel. Which Corden wisely bows out of. I attempted a cartwheel two years ago. It wasn’t pretty.

It’s possible there was a stretched groin involved. There are some things that are better left as mere memories from our childhood. 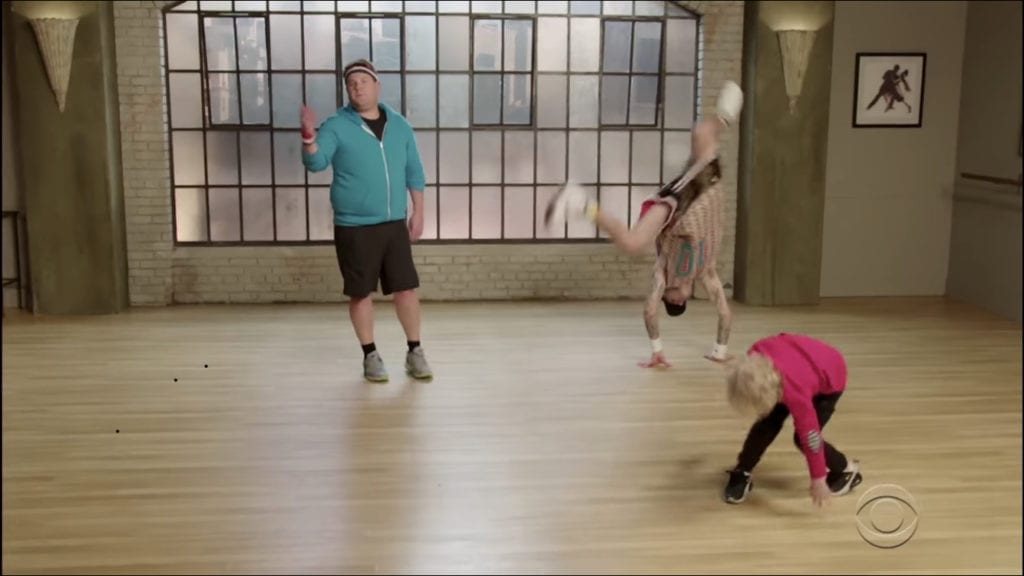 The lesson also includes such popular dances as the Hype and the Floss, in addition to some disco, hip hop, breakdancing and what can only be described as interpretive dance.

And what dance class would be complete without running a couple of laps and a yoga pose or two. Throughout it all Justin is IN IT TO WIN IT. 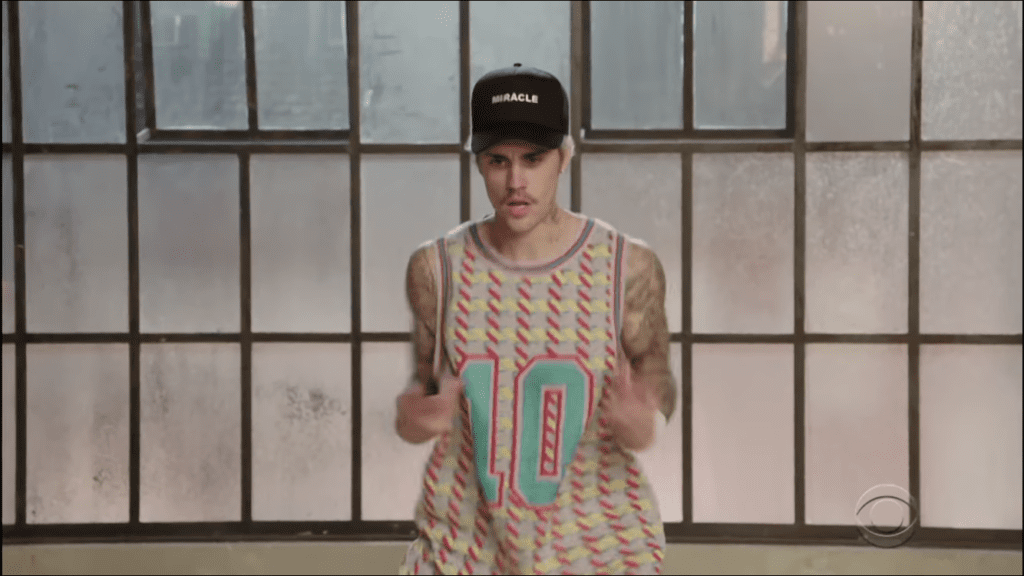 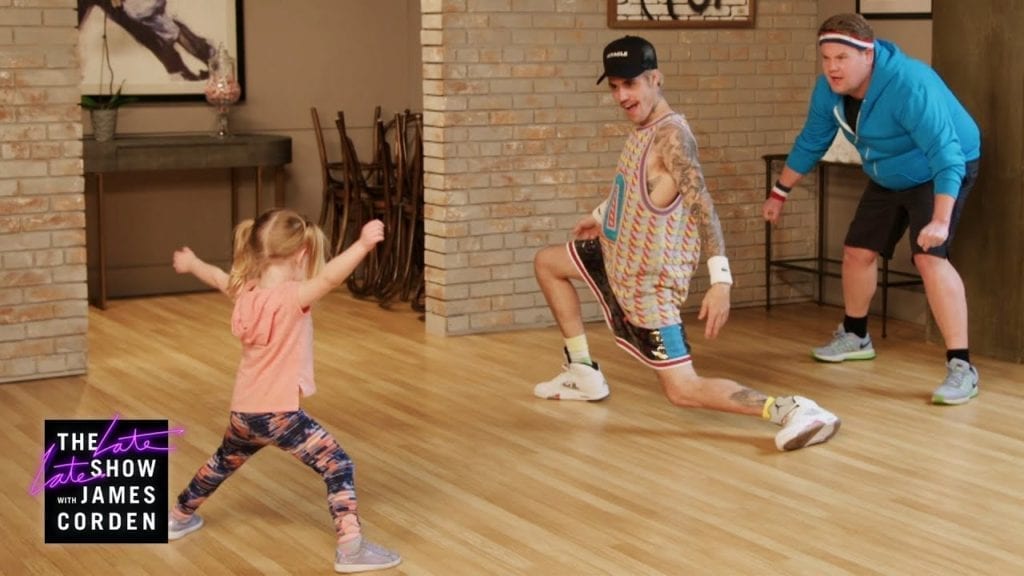 And whether you’re a fan of the Biebs or not, he definitely has a way with kids and is clearly having the time of his life. James? Maybe not quite as much. But it’s the toddlers who steal the show. With their slick dance moves and adorable antics they prove just who the real stars are.

The lesson ends the way all dance sessions should end. With bubbles.

While I may not have been a huge fan of Justin Bieber, after watching this video I am now. And so are my kids. They’ve been singing the song for hours. It’s possibly due to the fact that I have played it over and over on repeat. BECAUSE IT’S THAT GOOD.

You can watch the video in its entirety below and all I can say is, “Baby, baby, baby, oooooh.”