Filter Free Parents
Home Kids Mom Delivers Own Baby On Side Of Road While Five Of Her...

When it comes to giving birth, most women like to have some sort of plan. Like, for instance, what type of birth they want, or whether they want a hospital birth or opt for a home birth.

However, nowhere does it say in someone’s birth plan, “I’m going to give birth on the side of the road with my 5 children in the car.”

But for one mom it should.

34-year-old Heather Skaats planned on having an at-home water birth. However, as with so many things in life, things didn’t exactly go according to plan.

Instead of giving birth at home in the tub with midwives, she birthed her own baby. On the side of the road. While her 5 children waited in the van.

Someone, please give this mom a medal.

Heather shared her experience on her Facebook page, posting:

“Well, I had another wonderful water birth planned at home just as I had in the past. That didn’t go as planned.

I was literally driving in the car with all the kids when I felt like I needed to pull over. Got out of the car, went to the other side in the grass and literally had a baby.”

We can only imagine how that conversation went down. “Hey kids, stay in the car, mommy just has to do something real quick. I’ll be right back.” 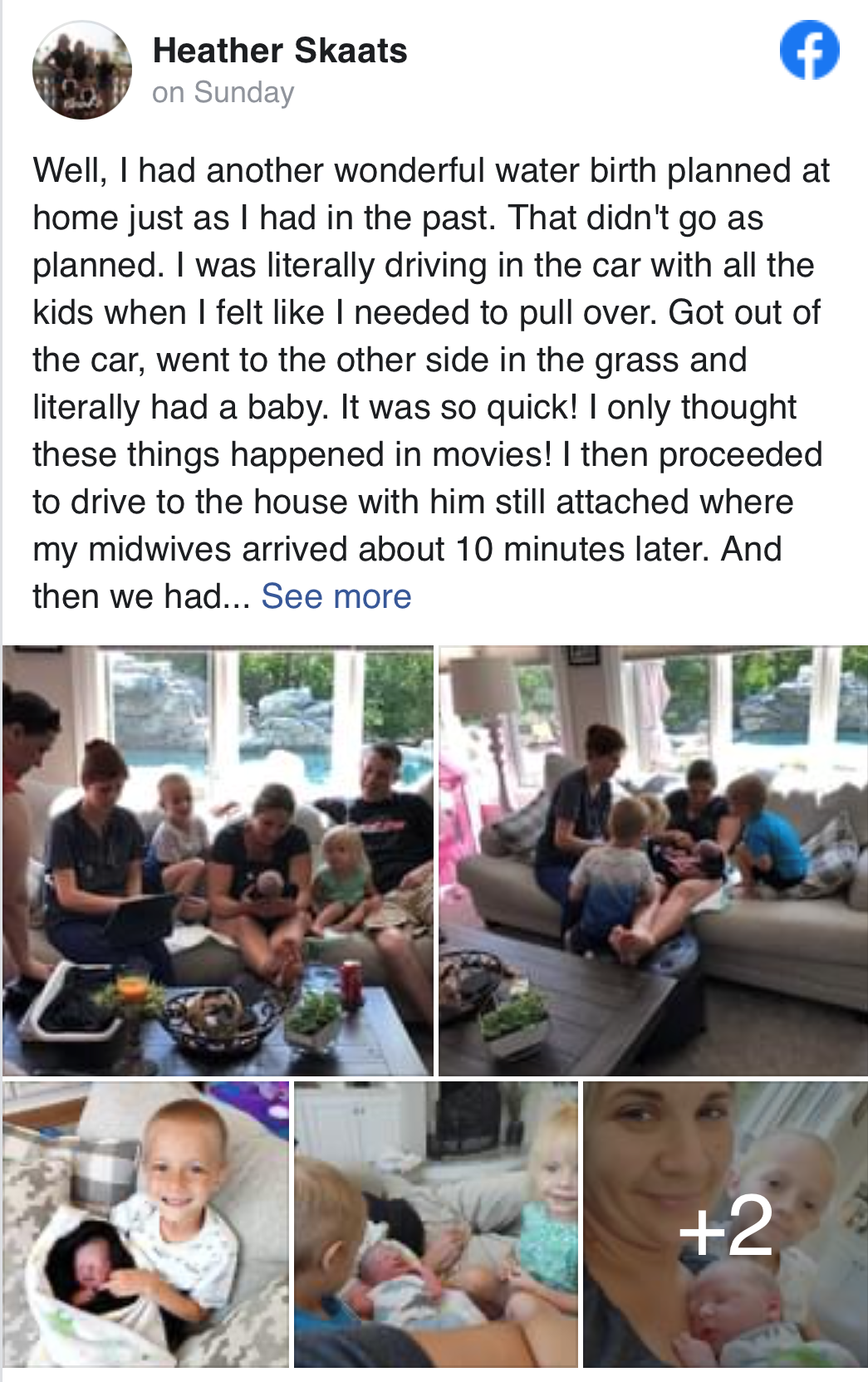 Heather told Today Parents that her due date was still three weeks away and although she was having light contractions she figured she had at least a few hours to get some errands done.

And if that doesn’t just sum up life as a mother, I don’t know what does.

“I was having light contractions before we left, so I figured I had time to run an errand. I thought I wouldn’t have a baby in my arms until eight or ten hours later.”

She did manage to get a quick call in to her husband to let him know that she was on the side of the road, about to give birth. He was on the line with her when mere seconds later, their son was born.

“I put my hand down there and his head started coming out with his body. I didn’t even have to push. It was so quick. I was on the phone with my husband, Nick, and 20 seconds later, I was like, ‘He’s here!”

All 7 pounds of him.

If this isn’t wild enough, Heather then proceeded to DRIVE HOME with her newborn still attached to the placenta inside her body.

I am woman. Hear me f*cking roar.

“I then proceeded to drive to the house with him still attached where my midwives arrived about 10 minutes later. And then we had to pick the grass off him.”

She delivered the placenta in the shower with the help of her 13-year-old daughter, Kaelynn.

(She also probably got the kids snacks, made dinner, AND threw in a load of laundry because moms just get shit done).

Obviously, this wasn’t her first rodeo. And she credits having home births in the past for helping her through the unusual circumstances surrounding the birth of her son.

Having a baby is a wild and crazy ride. Having a baby WHILE riding is next level. Moms are a force not to be trifled with. Like, eveeeer.

“I’m still in shock that I delivered my own baby on the side of the road. But he is perfect, all of the kids are happy to have him here, and today was a day I will never forget.”

She definitely has one hell of a birth story to tell.

Disney Stores Are Headed To Se…


The Story Behind This Viral Photo H…