I am accustomed to wearing my heart on my sleeve in terms of what I write about regarding the crazy train that we call parenthood, but there are occasionally topics that even I shy away from, for fear of being adversely judged. But I decided to address a sensitive yet often overlooked parenting topic after talking to two close family relatives who both happened to express the same sentiment to me: “I feel like a bad mom.”

The reasons that they shared this fear were different, but the pain and doubt were the same. They both felt that at that moment in time they weren’t doing a “good enough” job as mothers.

I often share the lighter, funnier side of parenting. But after reflecting on this idea, I decided to share my terrible scare in order to illustrate how we as moms frequently keep our judgments of ourselves to ourselves, often in fear of being judged even more harshly by our fellow moms. 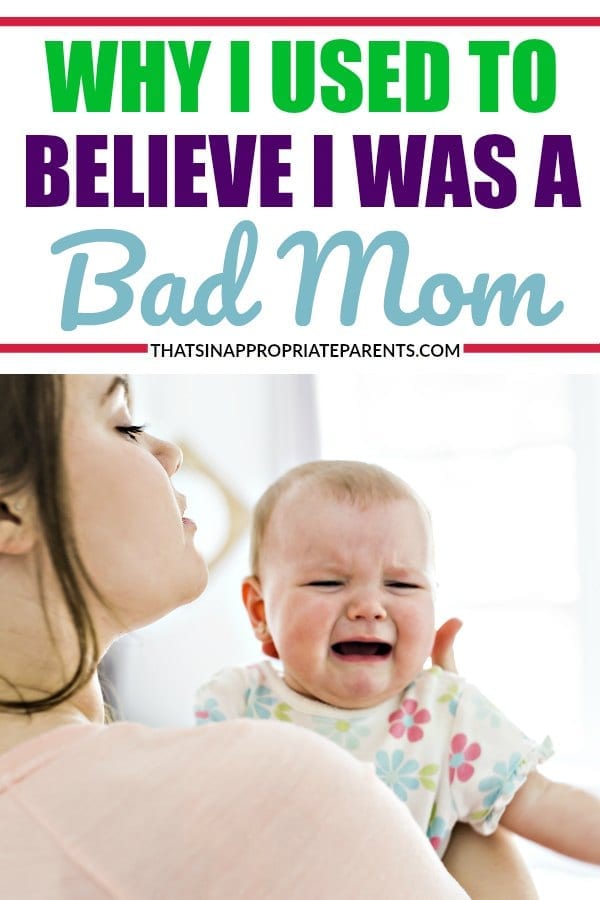 My youngest son and I were in the basement. I was folding laundry, and he was playing with his toys. He told me that he was going to get his blanket from his bedroom upstairs. No problem, right? He was 3 years old at the time, so a quick solo jaunt upstairs seemed reasonable.

He headed upstairs to get his blanket, and I continued to fold laundry as the washing machine churned. Moments later, just as I realized that my son was being suspiciously quiet, I heard him cry. But it was faint. I was afraid he’d hurt himself, so I tore up the stairs to find the front door open and my son on the wrong side of it—outside.

In the three minutes—yes, exactly three—that I had continued to fold laundry, my son had managed to unlock our front door and creep out of the house, undetected. He had attempted to open the car door—as per his tearful explanation—and then in trying to get back into the house, could not open the screen door, hence the crying. Suffice to say, his crying was no match for my own hysterics.

It was an avalanche of mixed emotions. I was relieved that he was safe and uninjured, then came the adrenaline rush of fear—the fear that he could have gotten hit by a car, or taken by a stranger, or wandered too far to be found. This was followed by guilt. It was a massive, all-encompassing, soul-crushing guilt.

Why didn’t I hear the door alarm (because as “good parents,” yes, of course we have one, and locks on every gate, too)? Why did I assume that I could trust him to go upstairs and not get into trouble? Why didn’t I realize that it would only be a matter of time before he tried to successfully unlock the door? Why didn’t I just go upstairs with him to get his blanket? Why hadn’t I folded one less towel?

Once the initial panic subsided, it was replaced by destructive thoughts. My mind was flooded with all matter of self-flagellation: I should have known better. I’m a HORRIBLE mom.

Then came the fear of social judgement: What would my neighbors think? People will think I’m a lazy, irresponsible mom. All of these thoughts led to the ultimate self-conviction: I blew it. I’m a BAD mom.

Obviously, the story had a happy ending. My son was perfectly safe, and my husband installed a chain lock at the door top that same evening for our little Houdini. But the feelings lingered, feelings of worthlessness and inadequacy. The internal mantra continued: I failed.

It’s hard to even put out there, even though this was not a recent event. But I’m sharing this story, because after thinking about my conversation with both of my relatives who voiced similar feelings toward themselves, I recognized the irony. When I encouraged both of them, I meant what I said. I talked about how as moms, we’re human. We lose our tempers. We forget things. We make mistakes. But there is no playbook for parenting, so all we can do is love our children and do the very best we can. If only I could apply my words of wisdom to myself.

But that’s the point. It’s our love—the intense, indescribably primal love that we have for our children—that compels us to set our expectations for ourselves so unbelievably high. Think about it: For who else would you gladly endure newborn sleep-deprivation?

We want to give our children the very best of everything, including ourselves. And when we fall short of that expectation—and we do, because we’re imperfect human beings—we can often be far more critical of ourselves and our actions than anyone else would be.

While I’m obviously a work-in-progress, it’s important to me to share this idea. We’re bombarded by news stories that often depict the very worst and sordid tales of parents who neglect, abuse, or even kill their children. And to us, those are obviously bad parents. But it’s interesting how quickly we can describe ourselves with the very same terminology in the moments that we fall short of loving our children the way we always want to.

My humble advice: Be gentle with yourself. Chances are, if you’re worrying about whether or not you’re a good parent, you already are a damn good one. Forgive yourself for your shortcomings and your mistakes, and learn from them.

And get a chain lock for your front door.