Filter Free Parents
Home Mom Life Encouragement The Crazy Thing I Did For My Teenage Son To Find Him...

My son has loved roller coasters since he was 10 years old. For years he has ridden them alone because we were all too afraid of heights and twists and turns and, well, certain death. He is sixteen now and he still loves coasters: the bigger and scarier the better. He’s always begged us, any of us to ride with him, but fear always held us back.

He has been understanding. He would joke, call me a wimp, and then laugh at me. “Mom, look!” he’d say, “People get off the ride. No one dies!”

“Don’t bore me with facts and evidence!” I’d reply. “Somebody has to be the first to go and we all know it’s gonna be me!”

We joked, but he held a look of disappointment in his eyes and I held guilt in my heart that my boy didn’t have anyone to share his excitement with on our family vacations.

This week we went to Universal Studios in Orlando. It was our second time. I had tried to talk myself into his favorite ride, The Rip Ride Rockit, but I failed and he rode it alone.

The next day he wanted to ride The Hulk. It’s a monster. It is scary and I once again said no. He smiled, hugged me and walked away. As I turned to the rest of my family I gathered a shred of courage, the only tiny scrap I had, and made a snap decision. I handed my bag and phone to my husband.

“I’m riding this thing for my son!” I announced. 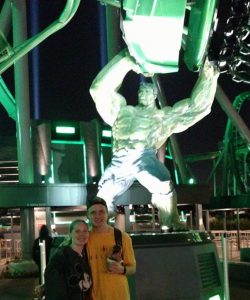 The rest of my family burst out laughing because apparently we were in Super Hero Land or whatever and the dramatic park music swelled just as I declared my heroic intentions. I choose to believe it’s because I’m that awesome and the universe gave me theme music. As it should. I’ll be expecting it at all times from here on out.

I caught up with my son. I told him I might scream and cry and I would most definitely say very bad words. I even made the little kid sitting next to me on the ride promise to apologize to his mother for me because I was about to set a terrible example of adult behavior.

Then we took off. 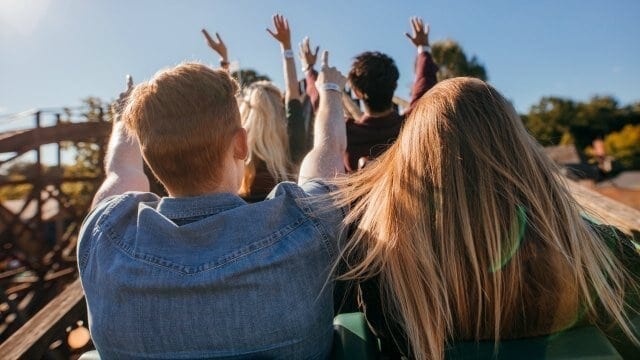 The ride was so fun! Honestly, though, the ride itself didn’t really matter much. I looked at my son who couldn’t stop smiling and laughing. I realized what I had been missing all of these years because I was afraid.

I was missing him.

In the next second I realized what I had been teaching him and I was completely ashamed.

By getting on that coaster I righted two wrongs. First, I showed my son that he is more important to me than Fear. I value him. I want to experience the things he is interested in and I am willing to step outside of my comfort zone, you know that place where you definitely DON’T DIE, in order to do that.

Second, I stopped being a hypocrite. As mothers we are always telling our kids you have to “try it before you can say you don’t like it.” (Personally, I think that’s a bunch of garbage, but I say it anyway. It’s some sort of Mom-Code thing, we’re required to say it.) Now, I’ve tried it. I’m not gonna lie. I kinda liked it. For the kid. Just for the kid.

As the day went on I braved more coasters with my son. I clearly did not die, although my lunch was in question a few times. We had a great day. I rode everything he wanted to ride. I noticed him opening up more. I felt like we were closer that day than we’ve been in a while. As if my not trusting him that I’d be safe on his rides had been costing me his trust in certain ways. I know they are just amusement park rides, but they certainly seem to mean much more than that.

To a child, the world is a brand new place and everything, every moment is an opportunity. I missed some big ones with my son. I am so grateful that I got to catch up on them before it was too late.

I kept my eyes open on that Hulk ride because I didn’t want to miss anything more. I think I’ll be keeping my eyes wide open from now on.

PS. My son demands that I let you know, Dear Reader, that HE was RIGHT and I was WRONG about the whole Death and Fear thing. He wanted me to be very clear about that. I was wrong. So wrong.

Netflix To Terrorize A New Gen…

As another school year comes to a close, kids everywhere are engaging in the age-old tradition of signing their annual … Read More