People don’t always see you. I struggled to accept this fact when I moved to a new city a few years ago. I already had a lot of great friends, so I assumed making new ones would be easy.

I wasn’t prepared for the pain I would feel when things didn’t work out how I hoped.

I planned to make friends at my new local church which is where I’ve formed friendships in the past. But despite my attempts to get to know people, I never got invited to anything.

One day I finally got information about a church playgroup and was counting the hours until the meetup. I showed up to Chuck-E-Cheese with the biggest smile on my face.

I walked up to the table where a few moms were sitting together engrossed in conversation and I introduced myself. They turned towards me to say hello, and promptly turned back towards one another to keep talking.

Their voices were soft, just above a whisper, as if they didn’t want me to hear what they were saying.

But I figured they were wrapping up some kind of private topic and would come back to me in a few minutes. Except…they didn’t.

I kept staring at the back of the woman who was speaking as she flipped her dirty blonde hair from side to side. I rubbed my newly pregnant belly as I wondered about what I should do.

My face became red and hot and I wondered if I should leave to go sit somewhere else. Then I considered leaving all together. But then I started to feel angry and said to myself,

“This is PLAYGROUP. Everyone should be welcome. Why are they ignoring me?”

I tried to interject myself into their conversation.

I mentioned my pregnancy and one woman turned around and nonchalantly said, “Oh you’re pregnant?” while the other women didn’t even glance in my direction. I answered, “Yes! Ten weeks along,” as she turned her back away from me again. I was dumbfounded. I hadn’t seen such a thing since high school.

After a few more failed attempts to speak to these moms, I found a table nearby and my kids and I had our own playdate essentially by ourselves. “Just pretend you don’t feel like an idiot,” I said to myself.

I forced a smile as I took a bite of a slice of pizza that was as hard as cardboard, and handed my kids some tokens to play games.

I was seconds away from bursting out into tears.

Here I was, brand new to the area, putting myself out there to attend playgroups and speak to strangers, and all they could do was ignore me. They looked at me, but they didn’t see me at all.

Over the next year I continued to try befriending these women. I showed up at playgroup and stood alone. I tried joking around and laughing about parenting experiences, but no one seemed to laugh with me.

My own thoughts reinforced that narrative as I struggled with depression during a very difficult pregnancy. I could have really used a friend.

So many times during that season of depression I wished for someone to see me. I tried expressing that I was having a tough time to a few people, but nothing seemed to develop into a genuine friendship.

My fatigue and depression were so heavy that I had no energy to try anymore. I cried over the pictures the other moms posted on Facebook of them having fun together. The fact that they didn’t ever seem to think of me really stung. I saw them, but they didn’t see me.

I saw other women getting thrown baby showers or dinners to celebrate their pregnancy. I didn’t need presents, but I longed for someone to celebrate with me. 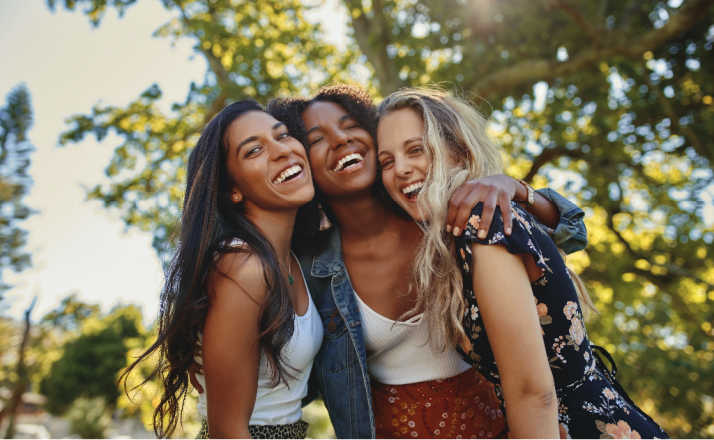 One day I received a package in the mail. It was from my old friends that I left behind when we moved.

They had gotten together some baby gifts for my son and some pampering items for me and surprised me by sending it without telling me.

I cried. I cried because I felt SEEN. These friends knew me. They acknowledged me. They listened to me. They knew I was hurting and lonely. And despite the distance, they found a way to show they cared.

Never has a box of baby clothes meant so much. I cherished the blue plaid polo and an orange striped tiger onesie that I didn’t really need, but made me feel like my baby was loved.

I gave my swollen feet a pedicure with the nail polish and lotion they sent, just like we had done together during my last pregnancy. That moment changed everything.

I didn’t need to make new friends. I already had the ones who mattered.

I had the friends who saw me, the REAL me, and loved me.

I decided that I didn’t need to waste my energy trying to make friends with women who were as fake as that cardboard-like Chuck-E-Cheese pizza.

Those are the friends who are real.