I was 24 when we had our first child. I had no idea what I was doing. I was young and scared and it caused me to say some really bonehead things to Mel. I feel horrible about it, so once again, I am going to have a conversation with my former self. Hopefully you new fathers out there can learn from my mistakes.

“When did the doctor say we could have sex again?”Oh, poor you. Having to go a few months without sex. Your wife just had a 6-pound baby ripped from a gaping hole in her stomach, but how horny you are pales in comparison to your wife’s C-section. Dude … deal with it. Your wife just grew a baby inside her body, then had a major surgery where a human life was dragged out of her, and then she was crudely stapled back together. Do you really think she needs you crammed up inside her? Think with your head for a minute. Give her body a rest. She’s earned it.

“There is no reason the baby should be sleeping in our bed!”Oh stop being all territorial. Getting up in the night sucks, and a mother only gets a very short time to snuggle with a baby. If she wants that child in the bed, let it happen. It will be over soon enough, and you’ll go back to serenading only your wife with your snoring and farts.

“When are we going to start exercising again?”I see what you did there. You said “we” and not “you.” Classy. You know what your wife just heard? “You need to get busy losing that baby weight.” Or maybe, “I’m not finding you as attractive after having a baby.” So basically you just confirmed what most women fear after having a child. Nice work, dick head.

“The baby can’t be that sick. He doesn’t need to see a doctor.”I get it. Money is tight. You just had a baby. But you have insurance with a decent deductible. What your wife wants right now is peace of mind because the thought of losing a child because you didn’t take him to the doctor is probably the scariest thing in the history of ever. Eventually your wife will figure out that doctors can’t do crap for a child under two, but until that happens, just shut up and take the kid to the doctor. It’ll be fine.

“Ugh … do I have to change the baby?” Yes you do! You are a dad! This is a partnership. If the baby is poopy, handle it. Don’t pass that crap onto your wife. Take pride in it. This is a new era. An egalitarian age where a man can change a diaper and feel good about it. Take advantage of the fact that you can, with the simple act of changing a baby’s butt without complaint, be a huge help to your growing family. Stop being lazy and stop acting like you are better than the job. Own it!

“Stop buying so many baby outfits. He’s not going to grow out things THAT fast. I think you just want to spend money.” Listen here. Babies grow at the same pace as chia pets. It’s incredible. The problem isn’t that your wife likes to spend money, so stop putting the blame on her. She actually took the time to read a couple parenting books, and learned how quickly children grow out of every single thing. She’s planning ahead. Stop being uniformed. Stop being cheap. Start enjoying the moment. “You have three months off from work. It’s like an extended vacation.” NO! IT! IS! NOT! It is recovery time, you idiot. It is time for your wife to get her body back together, and for her to connect with the baby. She should get as much time as she needs off, three months, three years…, that would be a decent maternity leave.

There’s no reason for me to get up in the night. You are the one with the food. Huge cop out, dude. Your wife had the child. You saw it, and it freaked you it. Now she’s producing food for the child, so you think thrusting all nighttime duties on her is justified. Cut the crap. The baby’s butt still needs to be changed in the night. The baby still needs to be rocked to sleep, tucked in, and snuggled with. Sometimes laundry needs to be done in the night when things get messy. There are plenty of things that happen in the night outside of feeding, so step it up and stop trying to get out of your obligations.

How long do you think you’ll have those stretch marks? This just in, you need to think before you speak, jackass. She’s going to have them forever, and that’s not a bad thing. Those streatch marks are a sign that she was dedicated enough to change her body permanently to bring your squirmy poop filled baby into the world. How about you stop looking at them like they are blemishes, and start looking at them as signs of dedication.

Okay. Okay. I’ve probably been a little hard on myself, but maybe that’s a good thing. Now I just hope some of you awesome fathers out there can learn from my mistakes. Let’s be supportive, dads. Let’s start a new trend. 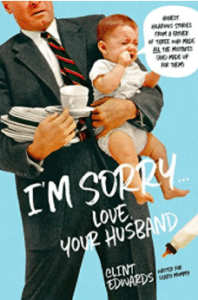 This is a chapter from the Clint’s hilarious collection of apologies to his wife and children “I’m Sorry…Love, Your Husband.” It’s full of priceless advice like this making it the best Father’s Day gift ever.

Clint Edwards is the creator of the daddy blog No Idea What I’m Doing. He is a staff writer for Scary Mommy and a parenting contributor to the New York Times and the Washington Post. He has been featured on Good Morning America, the Today show and The View. He lives in Oregon with his wife and three children. Follow him on Facebook.


The Sexy Time Stocking Stuffer That…

When it comes to doing the wild thing, it’s all well & good when things get hot & heavy… until … Read More

Channing Tatum Just Signed Up For A…

So you’re flipping through Tinder. I say flipping because browsing is too slow of an action; there are many, many … Read More