Filter Free Parents
Home Lifestyle What about the dad bloggers? 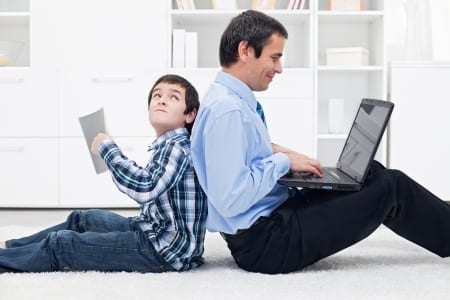 I have a secret. I love dads who blog. These extraordinary men are often gifted writers, articulating their words with vibrant language and masterful storytelling. They’re also true “parental” humanitarians. These are the good guys; the “exponential gentlemen” of the world, as I like to call them. But in my humble opinion, they get very little respect. The media fails to represent them the same way they do mom/mommy/women bloggers. Women quietly creep their posts, rarely commenting on or passing along their brilliant work. And other men… well, it’s a mixed bag. Some appreciate their efforts; others are downright nasty (and deserve to have a brick thrown at them).

My best friend sent me a link to this article the other day. After reading it, I was enraged. THIS is a GREAT father! It’s parenting in the finest light. He should be hailed a hero and looked to as a role model. Yet there are many who question his motives. Why? Why ridicule a father for wanting to openly and proudly write about his role and children? Why question a dad for doing his job and taking care of his own?  Is that not manly enough for some? Is it really that much out of character for a man that a percentage of other men actually think he’s “frontin’?” I don’t think so. I think there is a deep sense of jealousy and feelings of inadequacy that cause some to lash out. They know somewhere deep inside that THIS is a good man, and that they pale in comparison.

My favorite quote from the article:

“I love being a dad and I love sharing my love of fatherhood with others. Shit, being a dad is one of the few things in life I’m actually good at. Of course I’m going to be passionate about this gig. My dream is that ALL people will embrace men who embrace fatherhood instead of wondering if they have ulterior motives. Remember, we’re the good guys in this fight.”

It reminds me of my husband. He’s not afraid to put on a pink tutu and wear a plastic tiara to make our daughter smile. He’s man enough to sport spit up on his sleeve while talking with the neighbor. And come hell or high water he makes sure we all have what we need when we need it—even when there are two hundred other things going on around him. He really is an exponential gentleman.

I’d love to see him start a blog and talk about how he squishes Luca’s cheeks together and then laughs so hard, tears roll down his face. Or that he now has weekly daddy-daughter dates, not only to give mom a little break, but because Aless is the center of his universe. But the backlash scares me. He would take it with a grain of salt, but I would go on the warpath. You can shit on me, but you don’t mess with my family.

We really do live in a strange world where women are celebrated for blogging about motherhood, stretch marks, breastfeeding in public, and raising little people, while men are beaten in the Internet alleys for sharing pictures of their children and being great husbands. So today, I want you to take a moment and visit some of these amazing dads. They put their hearts on the line and continue to set the bar high for fathers everywhere. These are exponential gentleman.

Brian at The Life of Dad

Adrian at Dad or Alive

Charlie and Andy at How to Be a Dad

Jason at Out Numbered

The Guys at The Good Men Project

James at Luke, I am Your Father

Aaron at The Daddy Files

David at The Daddy Complex

Rob at Lost and Tired

Colby at Days of a Domestic Dad

Dad at Dad on the Run

Nick at Dad with a Blog

Chris at Rated 4 And Up

John at Ask Your Dad

Mark at The New American Dad

Mike at This Dad’s View

Don at Don of all Trades

Daddy at The Daddy Diaries

Frank at Gay at Home Dad

Robert at Diary of a Stay at Home Dad


“There Are Moms Way Worse Tha…

Target, we love you. SO MUCH. You, with your one-stop shopping and Bullseye $1 bins, and aisles full of so … Read More