Filter Free Parents
Home Health + Wellness Does My Toddler Have OCD? Here Are the Warning Signs

My husband and I come from a long line of “quirky” and “particular” people. People who have to have books set on a right angle on the coffee table and their coffee cups only sitting on the right side of their desks.

I, myself, have to keep my closet in a neat and orderly color coded system, and he has this weird thing about smells (among other things).

So when we decided to have a child and blend our goofy genetics we knew we were rolling the dice in the peculiarity department.

But when does quirky and particular become obsessive and compulsive disorder?

When most people think of OCD, they think of people that have to turn lights on and off six times or constantly washing their hands; when actually, OCD is made up of a wide range of behaviors from washing hands, to counting, to tantrums and anxiety if something isn’t done right.

Right now 1 in 200 children and adolescents have some sort of OCD in the United States and the number seems to be climbing.

Some of the warning signs in toddlers would, at first glance, appear to be regular toddler behavior; the trick is to keep tabs on these behaviors to ensure they don’t become obsessive. 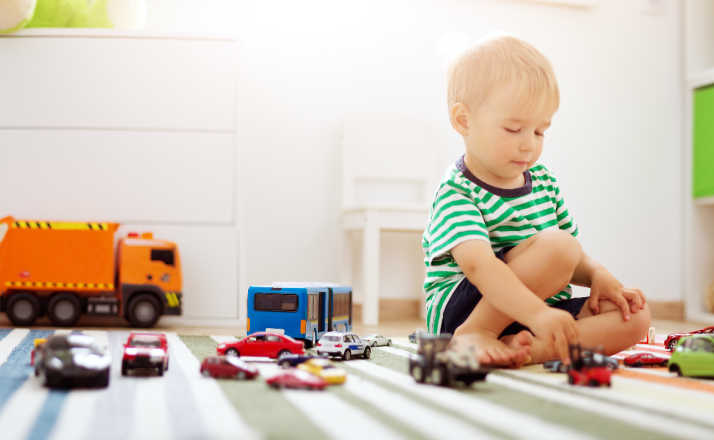 So what do we, as parents need to watch out for? What are some of the early warning signs of OCD in toddlers?

“All children have a few little worries and doubts, but when they can’t stop thinking about them and it effects their daily function then it becomes a problem. Parents should look for children not sleeping or a child that worries too much about one thing.”

Some symptoms you might recognize and watch out for are:

• Systematically lining up of toys, cars or other objects during play.

• Daily rigid rituals for tasks such as bed time or when a parent leaves.

• Child has difficulty knowing if she completed a task or thinks they did not.

• Child will repeat a task until it feels “right.”

• Fear of disease or dirt or dirty objects.

• Child fears if they don’t accomplish a task in a certain way that something bad will happen.

While some of these symptoms might happen in your daily life with your toddler, it does not necessarily mean that child has OCD or anxiety.

So when should a parent worry and consider seeking professional help?

According to Tamara Hill, MS, child therapist, toddlers are essentially too young to be diagnosed with OCD, which will usually happen around 7 to 12 years-old.

However, if a child’s behaviors are obsessive and interfere with daily functioning, you may want to see first your pediatrician and then a therapist or psychiatrist.

“In the mean time, parents can pursue ‘behavior modification’ to discourage the OCD-like behaviors by seeking a therapist. Some therapists will use behavior therapy to regulate anxiety. Other kids need medication; something as simple as an antidepressant.”

In the end, nobody knows our children as well as we do, and it is our job as parents to be advocates for them.

If you feel like your child is putting themselves under undue stress and experiencing anxiety, or you see your child in some, or all of this article, seek help for them.

The earlier you catch and treat OCD and anxiety in children, the better their chance of conquering this disease.

Guest contributor, Nicole Yontz, is a stay at home mom in Arizona, a contributing parenting writer for WhatToExpect.com and a personal blogger at TheBetterHalfBlogs.com.

As a child of the 80’s, I loved heavy metal music. Heavy metal is way less cool, however, when it’s … Read More

Oreo Has Created The Most Stuf Oreo…