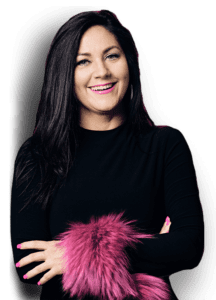 A self-made serial entrepreneur and vocal advocate for women, Cindy defies convention. In her industry, in her companies, in her outcomes. Her work today in The Pink Ceiling/Pinkubator continues to break barriers by investing in and mentoring other women to get to her same outcomes. She’s on a mission to make women really rich. You cannot miss Cindy. Everything she touches turns to pink.

Over a distinguished 24-year career in healthcare, in only the last 10 she has started and sold two businesses for more than $1.5B. First Slate Pharmaceuticals, which redefined long acting testosterone treatment for men then Sprout Pharmaceuticals which broke through with the first ever FDA-approved drug for low sexual desire in women — dubbed “female Viagra” by the media. After selling the company for $1B in 2015, she successfully fought to get the drug back and launch it on her own terms.

Christmas is the most joyful time of year and the sooner we start breaking out the decorations, trimming the tree and blasting Mariah Carey’s rendition of “Joy To The World” on repeat, the better. Fight me Scrooges.

In a world full of stress and anxiety people like to associate to things that make them happy and Christmas decorations evoke those strong feelings of the childhood.

Decorations are simply an anchor or pathway to those old childhood magical emotions of excitement. So putting up those Christmas decorations early extend the excitement!

In a Facebook post that has gone viral with over 110,000 likes to date, Kristen’s husband Troy surprised her with the Christmas Tree of ALL Christmas Trees. On October 31st. And OMG I dare you not to want to reconsider your Christmas miserly ways and turn over a new “wreath”.

Behold I bring you tidings of great joy.

This was last night, not last year. And this was her real reaction. Actually, this was after tears, and after literally jumping up and down. You see, she loves Christmas more than anyone over 12 I know. She loves ALL of it, the Hallmark movies, the decorating, the gift giving, family, the meaning … ALL of it.

And by her reaction, my only disappointment is that I didn’t do this years ago. Heck, if it makes someone I love this much, this happy, it can stay up all year as far as I’m concerned. #Oola #Christmas ???

Troy, you are the sweetest husband ever. This was definitely on the top ten list for surprises in my entire life! I love you.

When it comes to school shootings, we’ve become accustomed to wondering not “if” there will be another shooting, but when. It’s beyond disturbing, but the reality is that with alarming frequency, we catch wind of yet another school shooting.

Teacher Melody Blair Pellegrin shared a Facebook post describing what went on during the Saugus shooting, & it’s a heartbreaking reminder of the reality of what school shootings are actually like.

I was on campus with my first-period class, which starts at 6:55 am. We were minding our own and discussing the value of life when a student ran into my classroom frantically, shouting, “There’s a shooter!” For a millisecond second, I thought this is a crazy joke; this isn’t real! But I heard the screams as more desperate students poured into my classroom.

I immediately went to the door holding it open to allow as many students and teachers as possible inside. Once the flow of students stopped, I closed the door, made sure it was locked, and the lights were out. Everyone had already run to the opposite side of the classroom. We decided to enter the secure indoor core/common area in my building where other students and teachers were huddled on the floor. Another teacher and I barricaded the core door with desks and tables. Another teacher armed himself with a golf club ready to fight back if needed.

I didn’t have my phone on me but saw texts coming through on my watch. Nathan Pellegrin texted to see if I was ok. Chloe Ann Ross told me Hudson’s school was on lockdown. It killed me that I couldn’t respond immediately. I sat among terrified students as they texted their loved ones. I was scared too. We were quiet. We waited. Soon we heard sirens in the distance.

A student next to me got a text that students had been shot.

I eventually was able to grab my phone and texted my loved ones “I am ok.” I also saw I’d received messages from students asking if I was safe. At a time like this, they were worried about me? I could have broken down and cried right then and there, but I had to be strong.

We waited for about fifteen minutes when a sheriff came in, asked us to put our hands in the air, and escorted us out. Look at the sheriff’s enormous rifle…

One of my students turned to me and asked if we were safe since they were walking us out. I assured him we were. With our hands held high, we walked to the front of the school. To come around the corner to a sea of cop cars, fire trucks, ambulances parked in front of the school…the sight seemed unreal but…

We were escorted off campus and just kept walking. We were to go to Central Park down the street. Everyone was in shock but so strong. We hugged, comforted one another. We obeyed instructions from authorities. We were among the first to leave campus. Others had to wait for hours.

I was at the park for quite some time. Waves of students were bused in. Each time I saw one of my students safe and sound, I felt relief. Eventually, all students were released to their parents, and all staff could go.

I am so proud of my students. They did exactly as they were trained. They responded immediately. They were quiet. They listen to directions. They were brave. However, I am so sad they even had to experienced the trauma of today. It’s just not right. I can’t get their faces out of my head.

I am just so glad students who were with me were safe and out of harm’s way. My heart hurts for the innocent lives lost today. I’m sad that my students have to live with this memory. There is a long road of healing ahead of us.

It’s not ok that this is real.

When is it OK to let kids stay home alone?

[Tiffany] Section Intro: Curious as to whether you have any revenant roommates? Here are the signs you’re not alone at night.

The team spoke to 10 divorce lawyers and mediators and two judges in order to determine the main reasons why relationships may be likely to fail, before interviewing a cohort of couples.

When can children stay home alone?

In a nationwide survey of 485 members of the National Association of Social Workers, conducted from October to December 2015, the researchers asked several questions regarding what age would constitute child neglect if kids were left on their own at home for four hours.

Most states do not have laws or guidelines about when kids can be left home alone.

But the definition of neglect shouldn’t be dependent on whether a child is injured or if the parents are violating a law, Jennissen said, suggesting a need for national guidelines or safety laws on child supervision to better guide parents and protect kids.

While there’s a range of opinions among parents about when it’s OK to start leaving kids home alone, Jennissen pointed out that every child is different and some kids under age 12 may fare OK home alone for a relatively short period of time.

In the state of Florida: Because children mature at different rates, there is no single, pre-set age at which children are considered “old enough” to stay home by themselves for short periods. Parents must evaluate their child’s individual development and physical capabilities. The National SAFE KIDS Campaign recommends that children not be left alone before the age of 12. Many other children will not be ready until later than that. Also, experts caution that older siblings are generally not ready for the responsibility of supervising younger children until the age of 15 or older.