Filter Free Parents
Home Health + Wellness Have You Heard Of Sadfishing? Your Teen May Be Doing It

People posting on social media are often criticized for only showing “their highlight reel.” Those brag-worthy moments that make all of us secretly wish that we were living their lives.

But now there is a new trend popping up amongst our teens on social media and it is about as far from “perfect” as you can get. Goodbye happiness, hello sadness. And it’s purpose? To garner as much attention and sympathy as possible by exaggerating just how bad things are.

The phenomenon, dubbed “sadfishing” is linked with the Kardashians however it’s been around for years. Back in January, the matriarch of the family, Kris Jenner, posted a cryptic message about an upcoming personal admission from supermodel daughter, Kendall Jenner. Turns out Kendall’s “brave and vulnerable raw story” was just a promotional campaign for Proactiv Skin Care.

And the term “sadfishing” was born.

According to the Urban Dictionary, sadfishing is:

“The practice of writing about one’s unhappiness or emotional problems on social media, especially in a vague way, in order to attract attention and sympathetic response.”

Teens are walking hormonal balls of angst. They are moody and broody. They are woefully misunderstand. Just ask them. They’re the reason for the entire emo-music genre, with lyrics like:

And songs entitled, “I’m Not Okay,” “Misery Business,” and “Miserable At Best.”

Teen angst is the stuff of every great John Hughes movie ever made. For those of you who have no idea what I’m talking about here’s an abbreviated list:

The agony of adolescence is REAL. Before the advent of social media, teens would pour out their broken hearts onto the pages of a diary, or onto notes that they would slip to their friends during first period. They would scream out their sorrows while blasting music, or spend countless hours downloading to their bestie on the phone.

But now? Teens are turning to social media to share their innermost turmoil.

“Today was the worst day of my life.”

“Can the world just stop turning? I want to get off.”

They look eerily similar to serious cries for help. And sometimes? That’s exactly what they are. But sometimes? They’re not.

Sometimes they are just posts done by teens seeking attention and joking around. Because being sad makes you popular. The more raw and painful the post? The more people want a front row seat to what is happening in your life. And in high school? Popularity is king.

But What If The Pain Is Real?

Thanks to the upsurge of sadfishing, those kids that are genuinely struggling with suicidal thoughts and depression and are seeking comfort and connection online, are instead being ignored. Or worse, being invalidated and ridiculed for sharing their emotional problems.

Digital Awareness UK recently released a report on the digital wellbeing of 11 to 16-year-olds. They interviewed 50,000 students and found that:

“troubled teenagers are increasingly seeking comfort online, from strangers as well as friends. Whilst some find solace, others report feeling worse after being accused by fellow users of ‘sadfishing’ and attention seeking.”

They also concluded that in some cases, this rejection can damage the teenager’s already fragile self-esteem and make them more vulnerable to sexual predators online.

What Are The Dangers Of Sadfishing

While sadfishing may begin as a teen’s attempt to gain popularity, attention, and likes, it can quickly turn into a black hole of real despair. If you are constantly posting about the negative things in your life and dwelling on the bad, it can soon overtake all of the good.

Thus, creating mental health issues such as depression and anxiety that may not have initially existed.

And if your teen’s sadfishing really is something more than exaggerated claims of the unfairness of the adolescent existence?

Their cries may be lost in the chatter of all of their peers clamouring to get a piece of the sadness popularity vote.

The reality is that there are an increasing number of teens suffering with mental health issues. According to the CDC, suicide rates have nearly tripled over the past 10 years amongst 10 – 14-year-olds.

Many studies blame this on the toxic environment of social media. Constant comparing, seeking more and more likes, and searching for validation from anonymous strangers can take a serious toll on mental health.

What Can Parents Do About Sadfishing 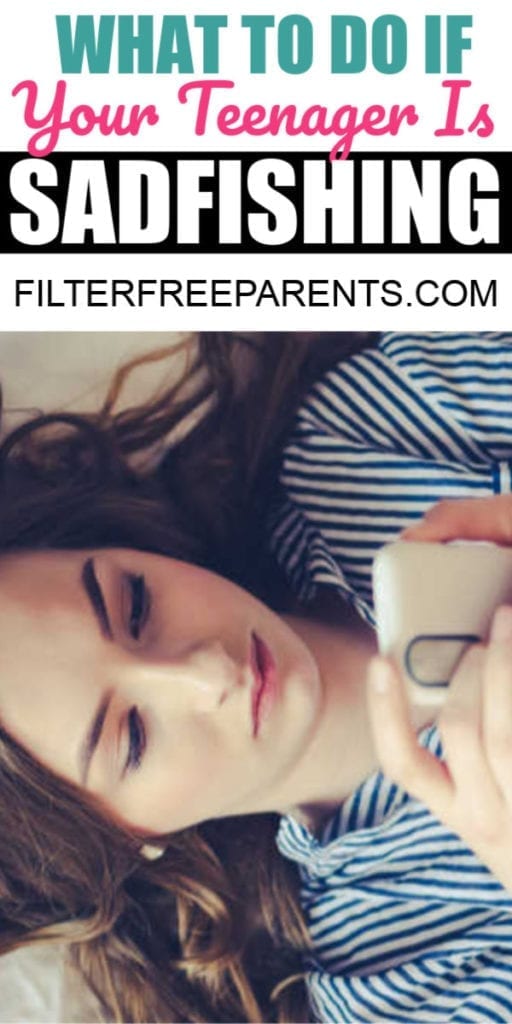 Talk to your teens about sadfishing. Be sure that you are following them on social media. Be involved in their digital lives.

Pay attention to what they are posting. If you see something that concerns you? Take it seriously and ask them if they are okay. Follow up. Again and again and again.

Explain to them the dangers of seeking negative attention and the effect it can have on their emotional well-being.

Look, navigating through adolescence is messy. I don’t know of too many adults that would willingly go back and relive those high school years. It’s angsty, and confusing, and sometimes downright miserable.

And being a teen in today’s online world? Takes the crazy to a whole new level. But the more we know as parents about what our kids are up against, the more we can support them and guide them in making better choices. Especially when it comes to posting on social media.