Filter Free Parents
Home Mom Life Encouragement I Had Hyperemesis Gravidarum With Every Pregnancy And It’s A Nightmare To...

I’m not ashamed to admit I have followed Prince William and Kate Middleton’s romance with the same fascination teenage girls devote to the Instagram feed of which ever heartthrob the girls are following these days.

When I saw that she was expecting Baby #3, I rejoiced for the impending slew of gorgeous maternity looks and adorable royal baby photos. However, one headline regarding her pregnancy, struck a very personal chord with me.

It was about her hyperemesis gravidarum.

The article hit me quite literally like a punch to the gut because I have suffered from the same condition as Princess Kate (figures, I couldn’t have been gifted with her shining mane or legs for days, no I had to get the royal intractable vomiting).

Having been there four times, I can tell you exactly where she is. She is lying on the royal bathroom floor, unable to remove her cheek from the blessed cool of the tile that is her only source of physical comfort at that moment.

She is curled in a ball, her head pounding from the ache of dehydration, her stomach roiling like a storm-tossed sea because she dared to attempt a sip of water that morning.

She is desperately reminding herself that someday it will be over and she will be holding her precious baby in her arms and no longer wishing for someone to administer nine months worth of anesthesia.

I know where she is because I have lived the nightmare.

Nine plus months times four, I’ll let you do the math. It began with my first pregnancy just before we left for our “babymoon” cruise to the Caribbean.

I threw up nine times at work the morning before we left and it dawned on me that the little paper bag tucked in the seat back in front of me on the airplane was not going to cut the mustard.

Before we left our apartment, I tossed a couple packages of applesauce in my suitcase because Dr. Google had advised keeping it on hand to avoid the exacerbation of morning sickness caused by an empty stomach.

This proved to be quite literally a gross error in judgement because by the last day of the cruise, I was so ill that I projectile vomited applesauce onto the people sitting at a table next to ours at the buffet.

It was so spectacularly explosive, my husband still refers to this as “the Vesuvius Incident.” To add excessively cruel insult to injury, once I made it to the bathroom, the people unfortunate enough to be seated in the splash zone were there in the same restroom, trying to wash the recycled applesauce from their clothes.

Between gags, I tearfully explained that I was 7 weeks pregnant and there was no need to raise the quarantine flag.

Whenever my faith in humanity wanes, I think back to how gracious and kind these women were to me in that most humiliating second of my life and my belief in the people’s basic decency is restored.

The volcanic episodes continued ceaselessly for days, with eruptions occurring upwards of twenty times in a twelve-hour period.

I called the OB who hadn’t even seen me as a patient yet and was prescribed a suppository of some kind of very strong antihistamine. They told me that if I was unable to keep fluids down for the next twelve hours that I would need to go to the hospital. 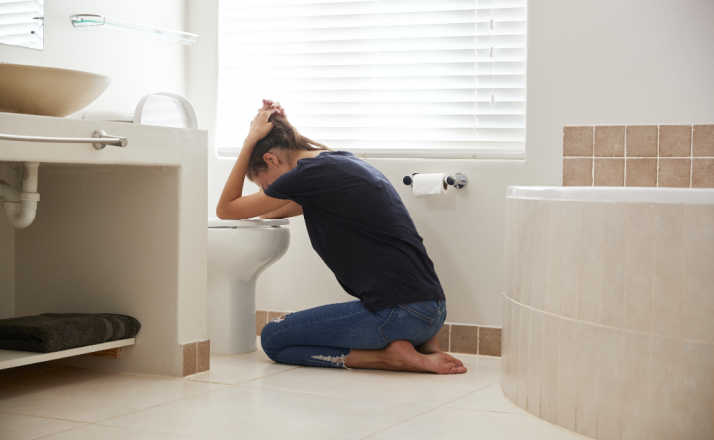 I grimly donned my rubber gloves and used the suppository, an experience of which I’m positive no one wants detailed here. It did eventually put a hold on the vomiting and allowed me to ingest some chicken broth and Jello but rendered me too drowsy to hold my head up, forget driving forty-five minutes to work.

By the time I hit twelve weeks, I had lost ten pounds I couldn’t spare and was quite positive I would not survive this pregnancy.

My OB recommended first time patients see a different doctor each time and subsequently, every month I had new face looking puzzled as they told me, “well, you should be feeling better soon, just keep your fluids down and eat first thing in the morning.”

Riiiiiiigggggghhhhht. I wanted to tell them what they could do with their saltines but since they were the ones prescribing suppositories, I was pretty sure they already knew.

At the twenty week mark, I would have a few days a week where there was a glimmer of light at the bottom of the toilet bowl and it seemed like I was feeling better.

Then I’d get cocky and try to resume a normal activity level or eat something other than watermelon (one of the few foods I could keep down) and boom would go the dynamite yet again.

After one doctor insinuating that I was trying to restrict my weight deliberately, I was irate.

I was over six months pregnant but no one could tell because of my hyperemesis gravidarum. I wanted to have a cute baby bump that strangers felt compelled to rub, I wanted to go out to restaurants and drive to and from work without having to vomit in a plastic bag I kept in the glove compartment.

Finally, I called the office repeatedly enough over one weekend that they sent out a prescription for one medication that, while never completely eradicating the nausea, allowed me to actually keep solid food down. (That medication has since been contraindicated for pregnancy so I’m not going to list it here for fear that others might view this as a recommendation).

It cost nearly as much as my daily take home pay for a week’s worth of pills and of course insurance didn’t cover it, so I used as sparing a dosage as possible.

My first son was delivered prematurely due to pre-eclampsia and when I was wheeled into the NICU to see him for the first time, two agonizing days after his birth, I felt an overwhelming surge of love and gratitude that even now, eight years later, I can’t find the words to describe.

In that instant, it was all worth it.

Worth it enough to do it three more times over the next six years but my trial taught me to be an advocate for my own care.

It taught me to speak up for myself and my child even when dealing with someone in a position of authority and expertise. I found a doctor in the practice who treated me like an individual with a complication instead of an imposition, the same doctor who had delivered my son in an emergent situation and saved my life.

I learned to rely on others, my husband and my family, because when you have this condition, you simply can’t do it alone.

I’ve learned not to travel on open seas while pregnant. Most importantly, I have learned what I am capable of withstanding for the sake of my children.


Parents in Race Against Time To Sho…

Most of us will never see the world in person, we’ll view it through small screens as we scroll through … Read More

Instead of Netflix and Chill, SNL S…