Filter Free Parents
Home Health + Wellness I Swear, I Used To Not Be The Hot Mess Mom

If you were to bump into me today, or any given day really, you would encounter someone who is friendly but frantic. Someone who is rushing because she is likely late and quite possibly has no idea what day of the week it is or even what she happens to be late for. She has her hair in a ponytail and her clothes will be wrinkled and may or may not match.

Her low fuel light will be on in her mini-van and she herself will also be low on fuel. So very low on fuel. You see I am currently, and for quite some time, a walking meme. I am the walking, talking, frantically rushing definition of a “Hot Mess Mom”.

My current state of existence is the punch line for almost every mom joke I see on Facebook. And I’m kind of over it. 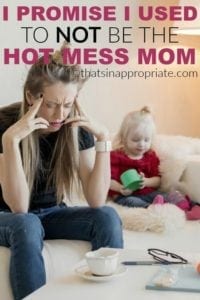 I wasn’t always this way. Four kids ago my stereotypical type “A” personality would have never allowed this to happen. I was organized, neat, tidy and punctual.

I kept a tidy and organized home that happened to be sparkling clean at all times. Seriously. I wore clothing that had been washed, dried and folded all in the same day. Do you remember that? Washing, drying and folding laundry all in one day? Me neither.

I could carry on conversations about art, literature and politics. Now I’m lucky if I can string two coherent sentences together and remember the name of whichever child I’m calling for in that particular moment.

When I became a mom I embraced the life altering mess and chaos that comes with children. I learned to relax a little about the newly messy house and laundry that sat in the washing machine for so long that I usually had to run it through again. That’s all standard stuff. It comes with the territory.

We really only had one child out of the first three that slept easily and on his own in the first year. The other two were more of a challenge. But nothing could have prepared me for our fourth. Our little firecracker who will actually turn four in less than three months has slept through the night a grand total of one time since birth.

She has slept through the night one time in nearly four years. Once. Let that sink in for a moment.

And I am sure there are readers out there who will doubt my claim, but I assure you it is completely true. I will never forget the night that she slept right through. It was less than a year ago and I woke up in the morning and ran to her room in terror because I was certain she had been abducted in the night.

For my sleep deprived brain it was the only explanation. And that night we immediately returned to her waking every hour on the hour.

The every hour on the hour waking is her standard sleep pattern. We will often have weeks on end when for no reason at all she will wake up around midnight and decide that it’s morning. If I’m lucky on those nights she falls asleep by 6a.m. which leaves me a half an hour to sleep before I have to get the older children up for school.

Recently she has had night terrors, growing pains, mysterious itchy skin and in the past three months chronic ear infections. Our doctor has no explanation and has been no help. We will finally see an Ear Nose and Throat Specialist in a month and a fellow mom at dance class has assured me he will work miracles for us.

Frankly, I need a miracle. 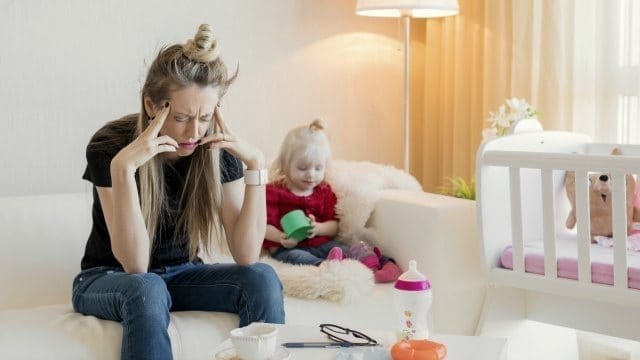 Having a large family means a very busy schedule. Especially when two of those children are teens. I have lost all ability to organize my days, weeks or months. I have a big wall calendar, a calendar at work, and sticky notes all over my house and a calendar in my phone where I now program alerts for almost everything.

And of course I have a calendar in my sleep deprived brain that likes to make me believe that I have somehow screwed something up on all of my other calendars.

My days are filled with constant coffee drinking and running and feeling like I’m getting nowhere. When I open my mouth to speak, nonsense often pours out and trying to have a conversation about anything is nearly impossible.

I am so tired at all times that my brain feels like a word search puzzle of errands I have to run and appointments that I can’t miss. I am always late. Always. I desperately try to be on time, but I’m so worn out that I might as well be getting kids ready to leave in quicksand. It’s really, really hard.

And it’s become a joke. It’s a joke for other parents, friends and family. I have become the “Hot Mess Mom”.

It’s a joke that I am always late.

It’s a joke that I forget what day the school trip is or that I paid a bill twice or not at all.

I’m a punchline and a sideways comment. “Here come the hot mess mom. She’s late again. Is that food in her hair?”

It’s all hilarious. For everyone but me.

I’m not the Hot Mess Mom. I’m simply completely and totally exhausted. And I am certain that I am not the only one.

For all of my fellow “Hot Mess Moms” out there who actually aren’t, I’m with you. Come find me and we can rush into school council meetings and doctor’s appointments late together. Arm in arm with a travel mug of coffee sloshing onto our shoes as we run.

And for those of you who know a “Hot Mess Mom.” Bring her a damn coffee. And hold your tongue. She’s likely just an exhausted mom who used to discuss politics and art.

Jesica Ryzynski is a Writer/Blogger and highly caffeinated mother of four children ranging in age from preschool to highschool. Sharing the challenges of raising teens and little ones at the same time and trying to stay sane along the way. Head over and check her out on Facebook

Yesterday I talked to one of my friends whose 9-year-old son is struggling with social anxiety. She is the fourth … Read More

Unfortunately for us, life doesn’t come with a manual. So we often look to others to help us navigate the … Read More