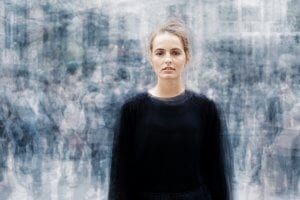 For most of my 33 years, I have been the biggest wallflower. I’m talking professional wallflower status.

It started with not wanting to be chosen in class to read out loud or answer a question. It progressed to singing along with the radio so softly that no one could hear, and only playing piano when no one was home, despite the fact that I love music more than anything.

As an adult it means walking into a room and immediately scanning for people I know. Or failing that, people I look like or relate to.

Don’t let me be visible.

That’s what it really comes down to, isn’t it? Don’t let me stand out in any obvious way. Let me melt into the crowd of “normal”. Normal sounds nice doesn’t it? Until you rephrase it as  “let me be mediocre”.  Let me be average. Let me be unoriginal. Let me be plain. Let me be unexceptional.

And the thing is – I’ve spent so much time and energy on trying to be invisible. I’ve let too many choices be dictated by the fear of standing out. Of being noticed. And ironically, all those energies were focused trying to notice someone else. Someone else who would stand out from the crowd. For being like me. See the circular thinking in that idea?

So this is what I’ve decided.

I am not going to try and be invisible anymore.

I’m not going to try and blend into the crowd. (Honestly, the notion of a 5’10”, plus size woman with a laugh that’s a little too loud, trying to blend into a crowd is just absurd in the first place).

I am sure as HELL not going to let my fear of standing out dictate my choices anymore.

I don’t care if I’m “the only one” in the group anymore.

I can use my unique assets (that’s what they are!) for good. I can use them for my benefit AND the benefit of others.

Any my hope is, that by taking this step, by being visible, those other “me’s” in the crowd – the ones who are desperately looking for someone like them – they’ll see me and breathe a little easier. Have a little less fear. Maybe they’ll even feel like they belong. Like they’re welcome.

And maybe next time, they’ll be more visible. Helping someone else in the crowd who is desperate to not be the only one.


“I Feel My Purpose Of Coming …