When 17-year-old Karis Wilson showed up at school dressed in a white turtleneck and knee-length black dress, she had no idea of the backlash it would incite.

Neither did her father.

The high school senior was sent home in tears when her female teacher and male student teacher counterpart deemed the outfit “too distracting.”

Um…am I the only one who doesn’t see a problem here??

According to her father, Christopher Wilson, Karis’s teacher called her out in front of her peers and sent her to the vice principal’s office. And her outfit was to blame.

The teacher felt it could make her, or her teaching assistant, feel uncomfortable.

But daddy had her back.

Angered by what happened, Chris, with the permission of his daughter, took to Facebook. He did so in the hopes that it would affect change.

He posted a live video to his Facebook page with the following statement explaining what had happened:

“Today my daughter was sent home for wearing clothing that made her female teacher and her male Student teacher “feel uncomfortable”.

Centered out in front of her class and told she needs to leave class and brought her to the VP’s before she went home in tears.”

“After asking her how she would like me to handle it she said she wanted to make sure this kind of thing doesn’t happen to the students that come after her. Please stand with Karis and I and make sure that those involved are held accountable and that this never happens again.”

His video contained an impassioned plea in defense of his daughter. (Yay Dad!)

In it, he admitted to being “frustrated,” “hurt,” and “disappointed in the system,” over what transpired. His daughter went to school feeling good about herself and ready to learn and came home mortified.

He also posted to TikTok. 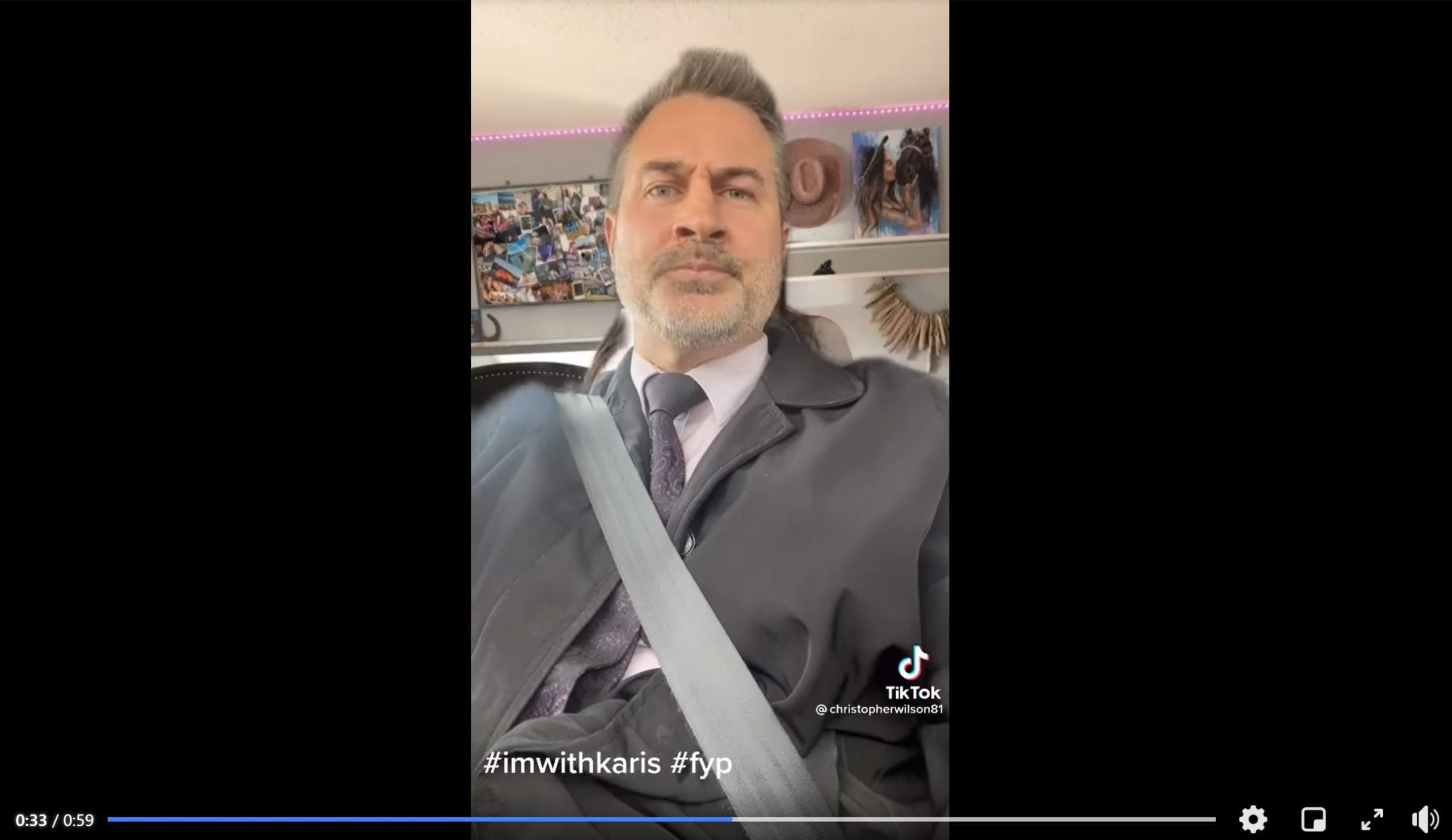 Which begs the question, what is the definition of distracting? If a dress over top of a turtleneck is distracting, what does this say about the majority of outfits on display in high school hallways?

Have these teachers stepped into a mall recently? Have they seen the clothes targeted to our teenage daughters: the cropped tops and the short shorts?

In comparison to the barely-there clothing that designers and consumers deem acceptable, this outfit is MODEST.

Karis is literally covered from neck to knees.

Thankfully her peers (and the internet) rallied behind her. Her classmates staged a small walkout in her support. Students carried signs saying:  “I am not my dress” and “My education is more important than what I wear” and “Am I distracting you with my midriff?” 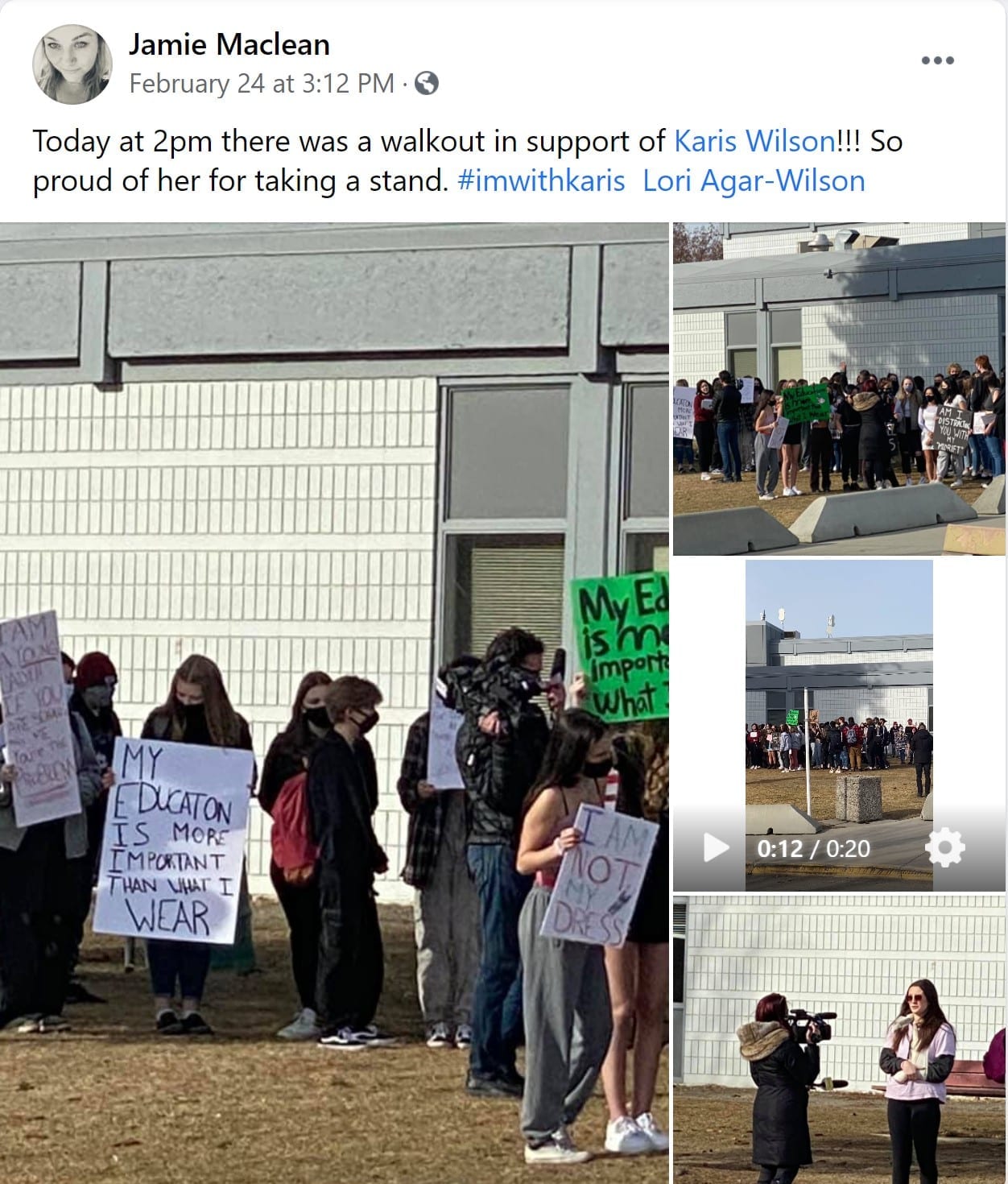 A statement which Christopher seems to agree with. He ended his video by saying:

“If you’re a teacher and you’re distracted by clothing your students are wearing, then you are in the wrong profession. Maybe you should try something new.”

There were a few voices who sided with the teacher, of course.

According to Wilson, the situation is being handled well.

A review has been launched into the decision. The superintendent of the school, Dr. Terry Sullivan issued a statement reading:

School District No. 73 (Kamloops-Thompson) is aware of the incident regarding a grade 12 student and dress code at NorKam Secondary on Feb. 23, 2021.

We understand the parent is concerned about what happened to his daughter at school yesterday. We are also concerned about these allegations and are treating them seriously. The incident is currently under review.

We will not comment on the incident specifically. Whenever a parent is concerned about their child at school we want to work with them for the best outcome for the student.’

No word on when the review will be completed.