There’s a commonly held stereotype that when it comes to feminine products, men are totally clueless. We see it movies and commercials (and sometimes, in real life) all the time- the dreaded horror a guy feels when asked to pick up tampons at the store for the woman in his life.

It’s 2019, fellas, and thankfully, many men are woke to the fact that their woman having a period is no big deal. In fact, there are plenty of guys who are more than happy to help their lady out by hooking her up with anything they need if it’s “that time of the month.”

One man went above & beyond in seeking assistance for his tampon-related quandary. He posted a request for help in tracking down a “single left tampon” on Twitter, & the subsequent Twitter thread is pure comedy gold.

Evan Worthen is obviously a devoted boyfriend who strives to make sure his girlfriend feels welcome in his home. To that measure, he noticed a recent… “issue” with some feminine products that his girlfriend has left behind in his apartment.

He found a tampon of hers. But he noticed a problem with it- or so it appeared to dear, innocent Evan. Being the loyal, supportive boyfriend that he is, Evan took to Twitter to seek a remedy to this apparent dilemma:

My girlfriend left a tampon at my apartment and idk where the left one is.

As a woman trying to decipher his confusion, I too was confused. He included a picture of a new, unwrapped tampon, so obviously he had one in the apartment. What’s the issue here, Evan?

He saw the giant “R” on the wrapper, which to him obviously meant “right”. So in his logical male mind, this one must be part of a set.

Evan’s conclusion: the “left” tampon, or “L”, must be missing.

And like a concerned boyfriend would, Evan jumped right on this. He was determined to track down the elusive LEFT TAMPON.

Anyone know where I can get a single left tampon to keep a set here for emergencies?

(Come on- you HAVE to love him for wanting to make sure his girlfriend had a complete pair of tampons at his home for emergencies.)

And Twitter was going to help him find it, dammit. Here’s his public plea, with a picture included, no doubt, for reference:

My girlfriend left a tampon at my apartment and idk where the left one is. Anyone know where I can get a single left tampon to keep a set here for emergencies? pic.twitter.com/6D51FIWrVU

Now truth be told, Evan was kidding, & posted the “request” for fun. But it’s the responses from people on Twitter that made this post really, really fun.

What evolved was a thread of tweets from women asking their male significant others if they knew what the “R” (regular flow) on the tampon wrapper actually meant.

And it turns out, tons of guys didn’t have a clue.

Scientific for sure- but wrong anatomical part, guy. Nice try.

A sporty, spotting tampon… what a super answer. 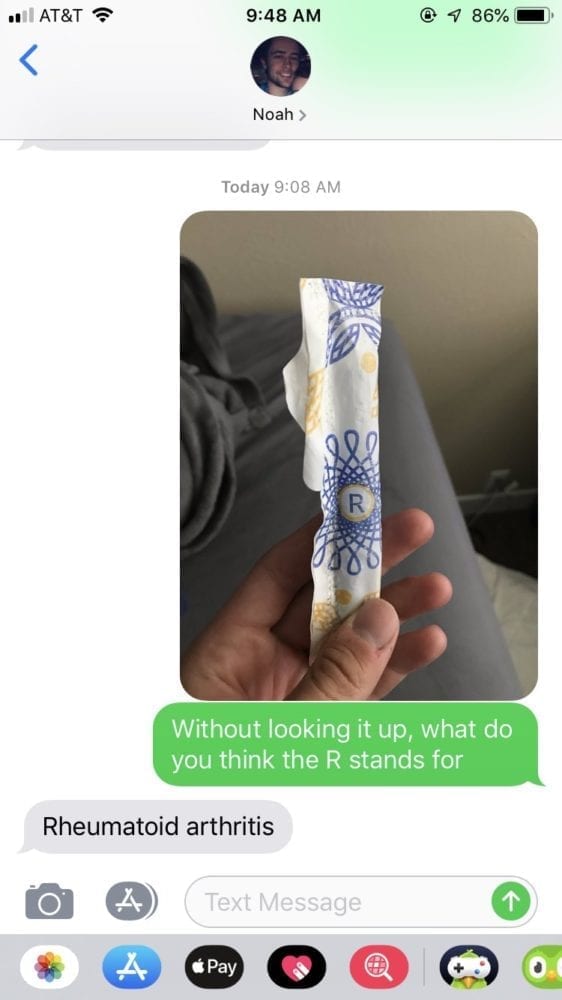 Not sure a single tampon is enough to handle rheumatoid arthritis, but maybe that’s why we need a matched pair?

Just asked my bf what “R” meant on a tampon and he said “rough?”

They can be, yes. I mean, sometimes that thing gets lodged, and you just have to yank- never mind. 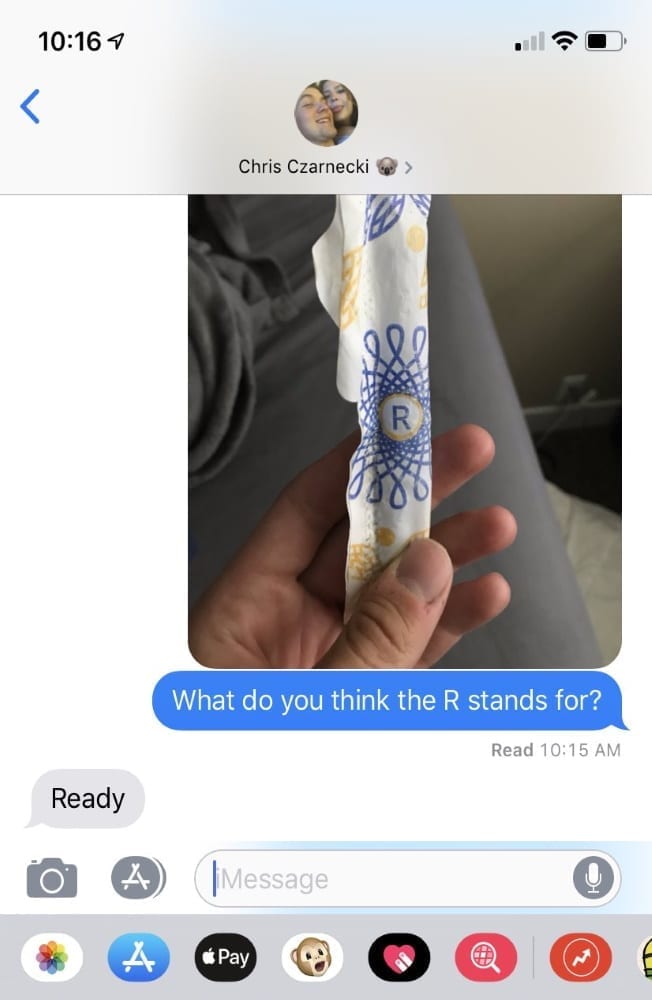 Well, he’s not wrong. If you find yourself needing a tampon, you’re glad you have one “ready”!

Mine said “regulate” then said “oh it means reverse…reverse that thang up out of there” ?

Wouldn’t it be great if tampons actually regulated your flow? The reverse part, though- ouch. Sounds kind of painful. 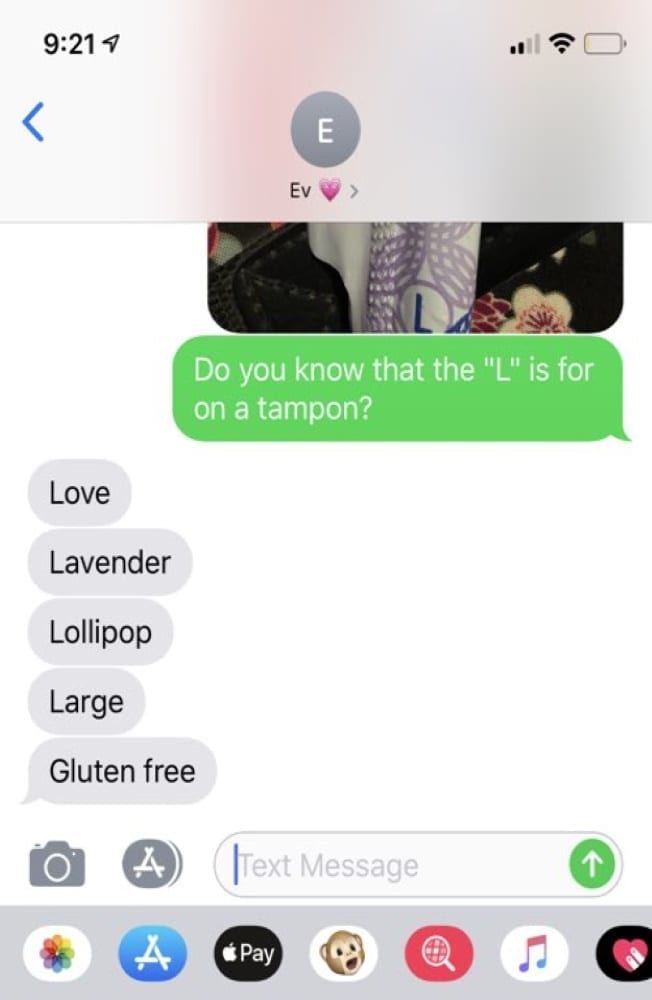 Well, at least this guy gave it the old college try; he definitely gets a “A” for effort. Not an “L”, though, since he clearly has no clue what it could stand for. (Points for “gluten free”, though.)

No, but it makes a bit of sense. I mean, especially once you have kids… 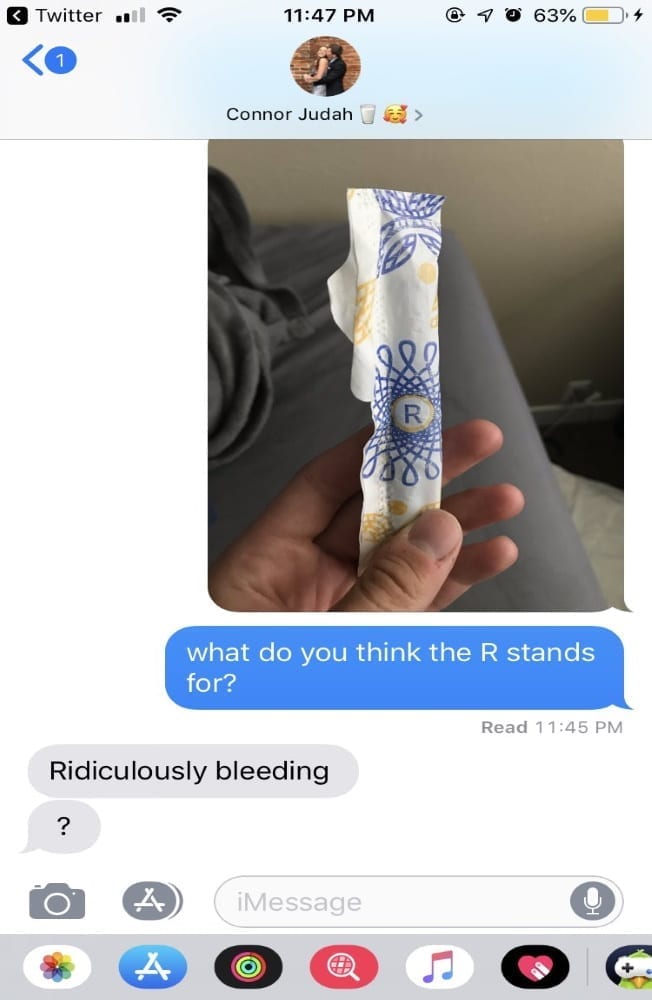 This dude should get partial credit for his answer, because TRUTH.

Mine said “right” at first and i laughed and he deadass said “i meant rear” like can someone come get this man ???

He corrected himself… but still wasn’t correct. Not.even.close. *SNAP!* That’s the sound of the limb breaking right underneath him, because it was the wrong limb. Nope. Though if my vagina had a “side”, it’d be lefty. Totally.

my boyfriend said “does the r stand for reusable”?? oh baby no

Ooh, boy, I sure hope not. One use is more than enough, thanks.

Clearly there was mass confusion from men who were stymied by the meaning of this mysterious “R”. But a few women pitched in to save the day by woman-splaining it to these clueless young pups.

plus don’t forget the “S” for “side”. you must have a “right” “side” and a “left” “side” for a total of 4 tampons shoved up there to ensure full coverage pic.twitter.com/vEe4gkLZKA

You gotta cover ALL the sides, guys.

found one! hope this helps. pic.twitter.com/BarcdoJ9Jz

Fear not, Evan! She’s got you covered; here’s your missing “left tampon”.

you dont need the left one if youre right handed

See, it all depends on whether you’re right-handed or left-handed…. unless you’re left-vagina’d or right-vagina’d. This is why women are complicated, bro.

So like there is an R and a L…but I just can’t stop wondering where they think these things actually go… pic.twitter.com/C8OuWtgtvM

While Evan’s original tweet was meant to be tongue-in-cheek, the resulting hilarious thread proves that the majority of men are really, really confused when it comes to the basics of feminine products.

And female anatomy, it seems.

Last night as I was in the midst of rage cleaning the house, my husband tentatively asked me, “Are you … Read More