If you have an elementary aged child, chances are your home has been taken over by squishies, the fidget spinner of 2018.  The little shits are expensive too, upwards of $15 a pop sometimes. SO when Susanne Kerns, a mom and writer decided to get them for her child’s class treasure box, she of course went to every mom’s go to place for cheap buys – Amazon.

Unfortunately she got more than she bargained for, and the end result was a hilarious product review that I think we all wish we would have written. She shared her full review (that she amazingly posted in her husband’s name) in a Facebook post that is now going viral:

Susanne explains that she did her due diligence and read the reviews of the product and while some reviews seemed sketchy, she took the plunge and Amazon Primed that shit straight to her door.

In her defense, the photos on Amazon (which she has on her blog post) did not show what she actually was about to receive. Because, of course. Instead it showed 30 innocent random little animals you might receive. It looks innocent enough, but what she got was anything but innocent. 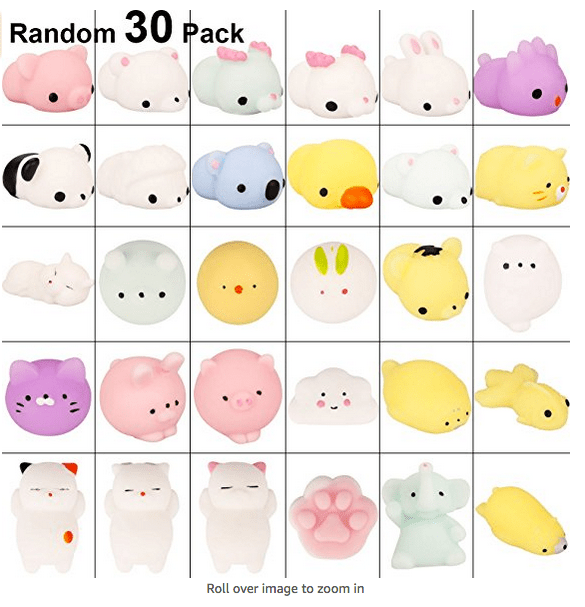 Upon arrival Susanne and her son proceeded to inspect the squishies, ensuring that they squished properly and I assume they were checking their slo-rise ability.

No one likes a squishy that isn’t slo-rise, and if you had asked me six months ago what slo-rise meant I probably would have a puzzled stare and given you an answer that had to do with cinnamon rolls.

Unfortunately now I have a strong grasp on what slo-rise means when it comes to squishies, I wish I didn’t, but alas here we are.

While inspecting the squishies, Susanne and her kids came across a variety of different animals. But nothing could prepare them for what they were about to stumble on. It was a penis. Yes, you read that right, a penis. I ripped open the package to show my 12 and 8 year old, who have enjoyed a wide variety of your Squishies.

“Now guys, these are going to the class treasure box, but you can each choose ONE to keep!” We sorted through the 30 pieces as the kids “AWWWWWWs” became progressively louder and more full of adorableness.

And then there was a pause…..”What animal is this, mommy?”

“Hmmmmm….I *believe* that the A in MSSTSRASTKSbS30P stands for ANIMAL, but kids, I’m pretty sure that THAT is a P, as in penis.”

Son: “That IS a penis! It even FEELS like a penis! THAT’S HILARIOUS! CAN I KEEP IT?!”

Susanne, of course, denied the request of her son to keep the penis squishy. I can only hope she has since made it an ornament on the dashboard of her Honda Odyssey as I assume any sane person would do. But here’s what she wrote in her hilarious review was she was actually going to do with it:

“No, you can’t keep it, that’s not appropriate. Instead mommy’s going to put it here on her desk next to her Christmas Story Leg Lamp. And under NO CIRCUMSTANCES, with the threat of losing your Nintendo Switch for the entire summer, will you inform everyone at your class store who buys a MSSTSRASTKSbS30P with their hard earned credits that you have a squishy at home that looks and feels just like a penis.”

Thankfully she left us all a warning with her Amazon review, and if you want that dashboard ornament I assume you can still order MSSTSRASTKSbS30P (aka Mochi Squishy Animal Stress Toys).

She did give the product a rating of 5 eggplants, errr…I mean stars.

But, she didn’t leave the Amazon purchaser wondering. She explained in great detail how squishy they actually are and it’s hilarious:

Material-wise, they are dreamily squishy, like little magical marshmallows that will undoubtedly result in an emergency vet visit when my dog eats one. In related news, they attract pet fur like a mo-fo.

**UPDATE** I have confirmation of what we all already knew….this thing is definitely a penis. The woman who confirmed it even has a FB group with almost 7,000 members called “THE ADVENTURES OF DINGDING” which solidifies my plans to put a Lego hat on mine and give it a name.

That’s right – the penis has a name in the online underworld of Facebook – DingDing. I can’t wait to see what Susanne names hers. Check out her full Facebook Amazon Review here.

I think for me, I’ll stick with buying my kids the $15 squishies, or direct them to mommy’s back fat, that’s as squishy and slo-rise as it gets.