Filter Free Parents
Home Health + Wellness Different Needs I’m A Mom That Smokes Pot, And I’m Coming Out To My...

The other night, I had “The Talk” with my eight-year-old daughter. Not THE talk. That will come later.

This “Talk” was about marijuana. And my sustained use of it.

As many talks do, it began with a single moment that had been brought to a screeching halt as I was caught red-handed in the act. An unusual occurrence, because I’ve always been so careful to hide it from my kids.

Though there have been times where they’ve unexpectedly barged into my room just as I’ve taken a hit from my green Rick Sanchez blown-glass pipe.

“What are you doing?” they ask suspiciously.

“Nothing.” I answer in a choked voice, as I attempt to hold in the smoke.

“Can I go play at my friend’s house?”

“Sure.” I croak out. Then off they run, and I’m free to exhale the smoke and my relief out of my window.

Let me be clear. I don’t hide smoking pot because I’m ashamed of it.

I don’t hide it because I think I’m doing something bad. Maybe it’s silly, but I hide it because it isn’t technically legal in my state (yet), and I have a fear that somehow, if the kids know, then they might inadvertently rat me out to the wrong adult, who will then take it upon themselves to create a stink over the use of “illegal drugs” in our home.

(I hear you laughing at me, perhaps my fear may be a little irrational.)

More to the point, I don’t approve of smoking cigarettes, and I don’t want my kids to confuse one for the other.

I do not consider myself a “smoker”. But edibles are expensive and hard to come by in a state where weed isn’t yet legal, and the vape pens are rife with nasty chemicals.

Their counterfeit cartridges aren’t regulated, and I’ve heard too many stories of things going wrong off of “just one hit from a vape pen”.

So I prefer to smoke my cannabis the old fashioned way. Just the herb, a pipe, and a trusty Bic.

The other night, my husband and I hosted a small dinner for our next-door neighbors, a bright young couple with four adorable little girls, whose ages range from six to five months old. You can imagine, their hands are quite full.

I’ll call them Gary and Moira. (Those are not their names of course.) Gary and Moira make no qualms about smoking the devil’s lettuce in front of their kids.

To them, it’s akin to drinking a beer or a glass of wine.

Being a mom that smokes pot is only taboo if you make it taboo. 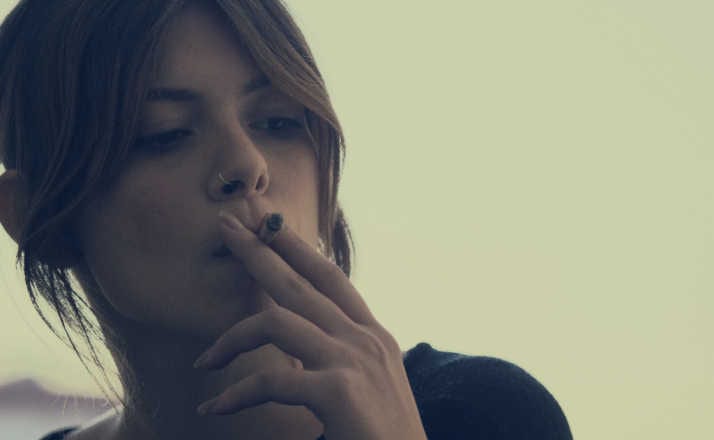 After what was–and I say this with no amount of false modesty–one of the best meals my husband and I have ever created (Gary practically fell out of his chair with satisfaction by the time he was finished), we grabbed our wine and adjourned to the patio to enjoy a delicious Springtime evening.

As we sat and watched our children play, Moira handed me a tightly rolled blunt, made with her signature grape-flavored paper. I didn’t even think about it.

I took a long, satisfying drag. Before I knew it my precocious little darling daughter stopped in her tracks and stared me down.

“What are you doing?”

“What?” I wasn’t being cheeky, I honestly was so caught up in the enjoyment of the evening that I wasn’t sure what she meant.

“Smoking that thing. I thought you said smoking was bad.”

And here we are, friends. The moment I was talking about. Where you have no justifiable excuse to explain yourself in any other way than what is the plain and honest truth.

First, it was simply a matter of explaining the difference.

“This isn’t a cigarette. This is something different. It’s an herb.”

“But you said smoking was bad,” she reiterated.

“Smoking cigarettes is. They are full of nasty, awful chemicals like tar and formaldehyde.” I’m sure she has no idea what “formaldehyde” is, but it’s a big scary word, and that’s good enough. “This,” I continued “is something that’s all natural, with nothing more to it than whatever they need to use to make it grow, just like the vegetables and fruit that we get at the grocery store.”

I was actually a little surprised by this. Didn’t I say she was precocious?

I took my time answering because I wanted to be honest.

But not too honest. Somehow, “because mommy has Bi-Polar and ADHD and this helps me function as an adult” seemed a little too frank.

“Well, because it helps me. Sometimes it can be hard for my mind to focus, like there’s too many thoughts in my head, and I can’t concentrate. This helps me to slow those thoughts down. It helps me to be more present in the moment. So that I can stop and enjoy my life around me. It helps my mind to quiet down.

She shook her head.

I explained to her plainly how children’s brains are continuously developing and growing.

How introducing a foreign chemical into their ever-changing neural pathways can cause permanent harm. And that is why marijuana, like wine, or beer, racy cartoons, is just for grown-ups.

She nodded, smiled, and was off to play.

Moira stared at me. “That was actually a really great explanation.”

“Another parenting win. World’s okayest mom over here.” I said, a little triumphantly, and a bit little insecurely, as I reached for her to pass the doobie back over.

This may not have been the epic shakedown you were expecting. In truth, as I read back over what I’ve written, it seems very simple.

When I have days where the house is a mess and I can’t get out of bed, I smoke.

The house gets clean, the dishes get done, the laundry gets folded.

When I have days where my anxiety tells me that I’m stupid and worthless and a terrible human, I smoke pot.

And I feel better about myself and the way I connect with the world around me.

When I feel the maelstrom of thoughts overcome me, creatively blocked, and so choked by my inability to focus that I feel like jumping out of my own skin, I smoke. And the peace that comes from mental serenity engulfs me.

This isn’t Cheech and Chong. (“Dave’s not here, man.”) I’m not wandering around my house in a haze of skunky smoke as I laze about and let my life slip away.

Not severe, but enough that it hurts. So Mommy smokes grass sometimes to wind down. Just like some Mommies have a glass of wine to relax and release the stress of daily pressures.

Just like some Mommies take prescribed medication to help them be the best Mommies they can be.

Mommy wants to end the stigma about parents who use marijuana in front of their kids.

A Live CoComelon Tour Is Happe…

It’s been 7,000 days since the pandemic started and we’ve all begun to live under social distancing, remote learning, and … Read More