There’s a reason why there are books like ‘Scary Stories To Tell In The Dark‘ and movies like ‘The Amityville Horror’ and ‘The Haunting In Connecticut.’ Because ghosts are real.

Sure, you can go ahead and tell yourself that they’re just stories made up in some weirdo’s crazy ass mind to scare the shit out of you. Which, during the day, seems like a perfectly logical and reasonable explanation.

But are they? Really? Because when you’re sitting in the dark, all alone, and the shadows in the corners of the room are shifting and the wind outside is howling, except, wait, there is no wind…Go ahead, tell me again, there are no ghosts.

There are ghosts, people.

I am legitimately afraid of ghosts. I swear, when I was about five-years-old, I woke up to see a ghost swooping out of my closet. At the time we were living in a townhouse that had been built on top of an old landfill site (seriously, what land developer thought that was a good idea?).

There was a cemetery located just kitty-corner and across a main road from the condo complex. It was like we were smack dab in the middle of a mini Bermuda Triangle. The day after I saw the ghost? It was discovered that a man had killed his wife two doors down from us during the night.

In a Facebook post that has gone viral with almost 400,000 likes and 235,000 shares, Maritza Elizabeth, recounts her own ghostly tale of horror, except with a hilarious twist.

She posts the following photo:

The image, taken from her baby monitor, shows her precious baby boy cuddling up with his blankie, and what appears to be a ghost baby.

So last night I was positive there was a ghost baby in the bed with my son. I was so freaked out, I barely slept.

First of all Maritza, you should be freaked out. Because clearly? GHOST BABY.

Secondly, you barely slept? No.Doubt. BECAUSE, GHOST BABY! I know what a lot of you are thinking right now. Why didn’t she just go in and check on her son? HAVE YOU SEEN AMITYVILLE HORROR?

She does, in fact, try to investigate. You’re a brave woman, Maritza. She creeps into her son’s room with a flashlight but she still isn’t fully convinced that he isn’t canoodling with a creepy spirit baby of the dead.

It is at this point that I would have scooped my son up, run out of the house screaming the Lord’s Prayer, and burnt it all to the ground.

But not Maritza. She goes back to bed and lays there, trying to decide whether or not she should wake up her kids and bring them into her room. HELL YES YOU SHOULD.

Instead she chooses to wait until the morning to investigate further (likely in the hopes that Casper has floated off into the Light sometime during the night.) And she finds out the truth behind the ghostly figure.

Spoiler Alert: It wasn’t a ghost. BUT IT COULD HAVE BEEN (because ghosts are real, you skeptics).

Apparently the crib mattress manufacturer deemed it necessary to put a picture of a baby on the mattress label.

A picture that is normally covered up by a mattress protector. But Maritza’s dearly beloved? Doesn’t know how to fit a sheet to a bed. Yup. That is all.

It turns out my husband just forgot to put the mattress protector on when he changed the sheets ?? I could kill him.

It’s possible I would kill him. After I called in Ghostbusters, an exorcist and a priest. Come to think of it, I would probably do it before, you know, just in case he decided to try and haunt me.

People in the comment section can’t help but laugh at Maritza’s “ghostly encounter”. Because it’s daylight and there’s no such thing as ghosts (are you sure about that?)

Exactly. Laugh it up now. Everyone knows that creepy things (like ghost babies) only come out when it’s dark.

Others would have freaked out right along with her.

Others questioned how she could just leave her precious baby sleeping with a ghost. 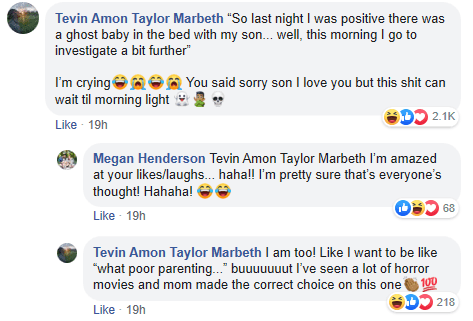 I know how. It’s a freaking ghost!

This particular “baby ghost” story may have been short on an actual ghost but that doesn’t mean they don’t exist. The next time your lights flicker, or you’re wandering around your house, late at night, and you think that noise you heard was just the cat? Or the furnace? You may want to think again. Ghosts are realllllllllll….

So last night I was positive there was a ghost baby in the bed with my son. I was so freaked out, I barely slept. I even…