Our job as parents is to raise our children to be independent. We know this. From the moment they are born as we hold them tight, we know that eventually, we will have to let them go.

And yet, it doesn’t change the fact that when we send them out into the world, it’s HARD. We want them to be safe from the big bad that we know exists.

So it’s nice to know that there are people out there looking out for our kids.

In a Facebook post that is going viral, one mom shares her story of an entire Starbucks team watching out for her 18-year-old daughter when a strange man approaches her.

In just one day, the post has garnered over 47K likes, 31K shares, and 1K comments.

Brandy Selim Roberson from Corpus Christi, Texas, posted a photo of a Starbucks cup emblazoned with the handwritten words:

“Are you okay? Do you want us to intervene? If you do take the lid off the cup.”

She captioned it with the following:

“My 18-year-old daughter was at Starbucks, alone, the other night. A man came up to her and started talking to her. A barista handed her “an extra hot chocolate someone forgot to pick up.”

How grateful I am for people who look out for other people!”

Knowing that there are people out there who are willing to take the time and the effort to make sure someone is okay is beyond reassuring.

As for what happened with the 18-year-old? She didn’t feel the need to take the barista up on her offer but her mom is grateful that the safety net was there should she have needed it.

Roberson added a side note, writing:

“Side note: She felt safe and did not remove the lid, but let them know. She said the whole team was watching over her the rest of the time she was there.

Thank you to the team at Starbucks on Staples and SPID in Corpus Christi.”

According to an interview with WTHR13 News, Roberson’s daughter, a high school student, was sitting alone studying when the strange man approached her.

“Employees noticed something was off when a man approached her and seemed as though he would not leave her alone.”

That’s when they took action and a barista handed the teen the cup.

Eventually, the man walked away.

While the majority of comments on the post praised the Starbucks employees saying, “Way to go!” “This is awesome!” and “I love that they were looking out for her!” not everyone feels this way, apparently.

Reaction to this post was divided. While many took it for what it was, a simple act of looking out for someone, others, not so much.

A number of commenters were triggered by the post and took issue with it. Most of them men.

They are clearly missing the point.

For reasons not stated in the post, the Starbucks employees were obviously concerned enough about the teenager to offer her help.

Whether it was the vibe the man was giving off or the teen’s response to him, they wanted to ensure that she was comfortable and safe.

There is absolutely nothing wrong with looking out for others. Full stop.

The reality is that every woman I know has felt threatened or harassed at one time or another.

There’s a reason we look back whenever we walk alone at night, hold our keys between our fingers when we’re in a parkade, or pretend to talk on the phone to avoid some random creep from approaching us.

We have all known the discomfort and fear when someone forces himself into our space, ignores our words and actions, and purposely disregards our boundaries.

“I hope they keep that same energy when a woman approaches a young Man. I appreciate them looking out- but man- thats presumptuous.”

“I spoke to the woman who was the manager at the time. She said she absolutely would. It wasn’t about gender.”

And that is what’s at the heart of this.

If we can watch out for one another, offer our help when something seems off, say something when we see something, we can create a safer environment for ALL.

And shouldn’t that be the world we all want to be living in? 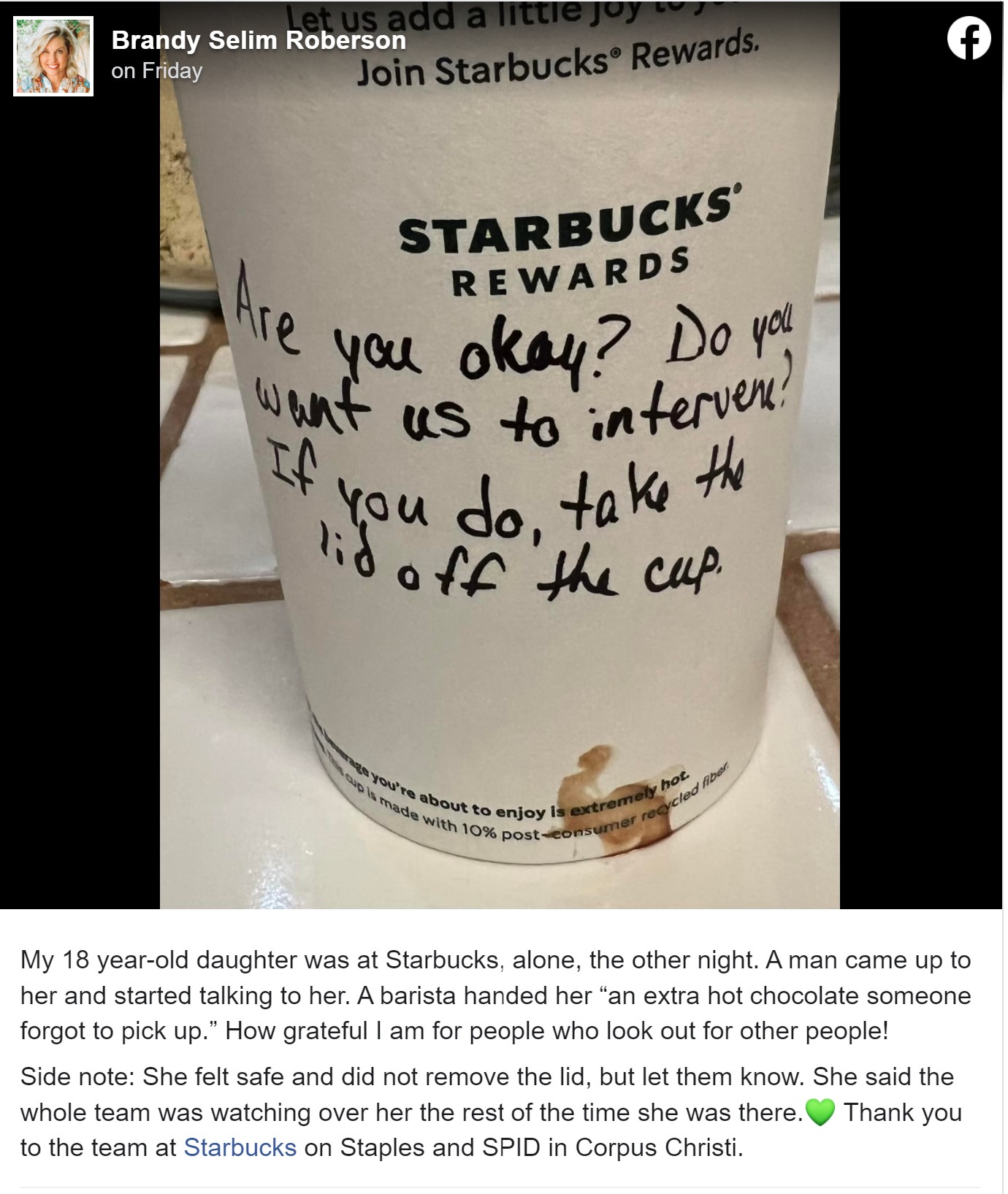