There is nothing more relaxing than soaking in a hot bath, surrounded by lavender-scented bubbles, candles lit, with soft music playing in the background. “Calgon take me away…”

That is until about 30 seconds in when the kids start banging on the door, asking for snacks, arguing over who did what to who and starting up a roaring rendition of “Fight Club.”

And then, not so much.

It’s obvious that bathing has a number of benefits.

One study done by the Loughborough University in the UK even found that soaking in hot water for one hour can burn as many calories as a 30-minute walk or light jog. So forget jogging, take up bathing instead.

And for a lot of parents? Bathtime is a common nightly ritual with their kids.

The show, however, took an unexpected turn when Shepard wanted to dig up the dirt on K&Ks hygiene practices. 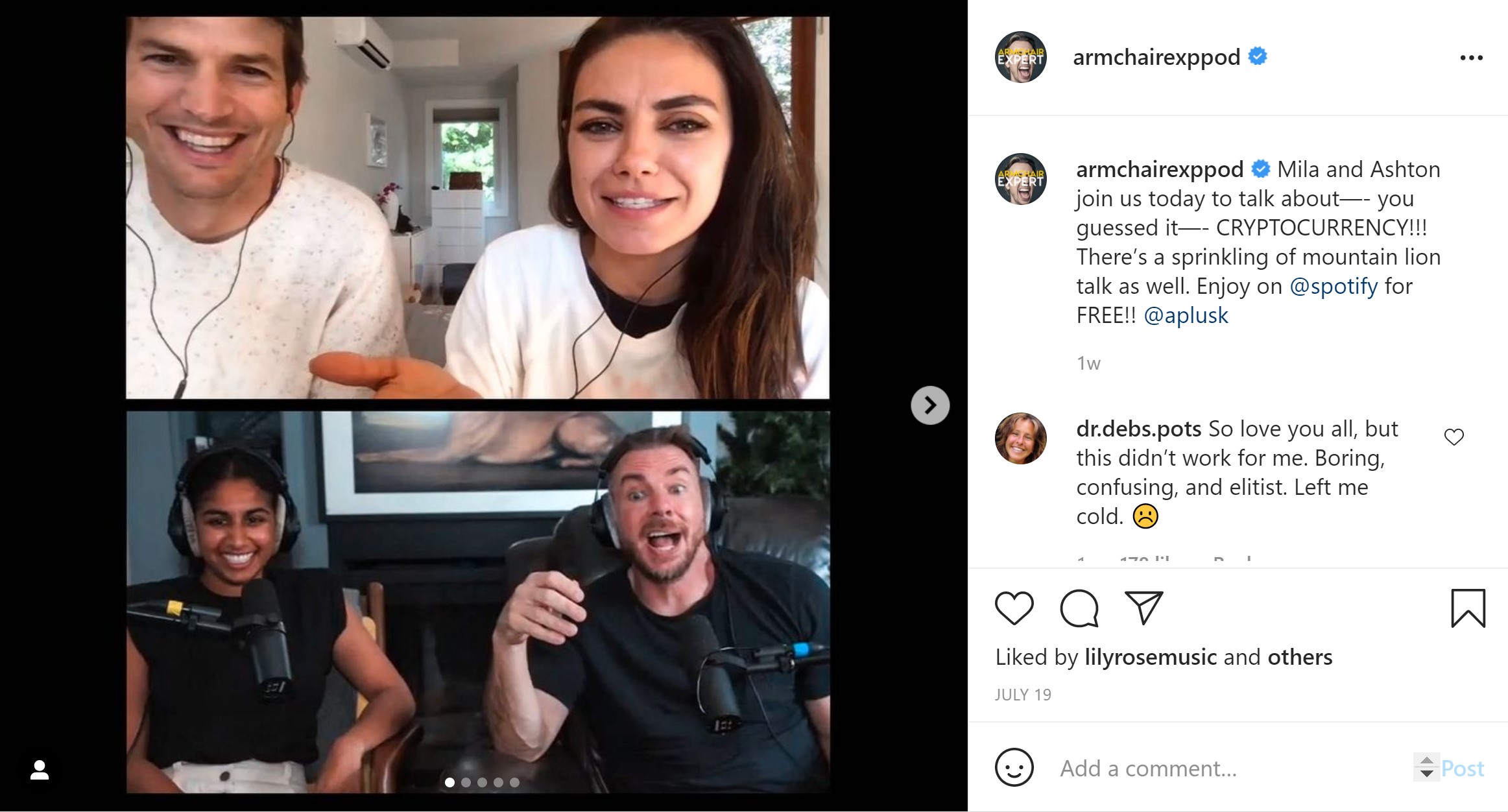 Apparently, he and co-host Monica Padman have had a pre-existing month-long argument over whether or not a person should wash their body daily with soap, and Padman’s compliment to Kunis regarding her glowing skin was the perfect segue to discuss it.

Shepard is team “pits, slits, and tits” (with Padman adding “soles and holes”) whereas Padman is team whole body wash.

“You should not be getting rid of all the natural oil on your skin with a bar of soap every day. It’s insane.”

And Kunis and Kutcher agree, much to Padman’s horror.

Kunis says she doesn’t wash her body with soap every day but does wash her “-its” and “-oles” and washes her face twice a day.

Kutcher on the other hand admits:

“I wash my armpits and my crotch daily, and nothing else Ever.”

He goes on to say:

“I got a bar of Lever 2000 that just delivers every time. Nothing else.”

When Padman incredulously begs the question, “Who taught you not to wash?” Kunis explains that she grew up without hot water and didn’t shower much anyway.

“But when I had children, I also didn’t wash them every day. Like, I wasn’t the parent that bathed my newborns — ever.”

And as the kids have gotten older, this hasn’t changed. She jokes with Shepard that they wait until “something smells” before throwing the kids into the bath.

“Now here’s the thing: If you can see the dirt on them, clean them. Otherwise, there’s no point.”

And as a parent, all I can say is “Meh, you do whatever works for you and your family.” And clearly, their kids haven’t hit puberty yet, when they’ll be begging them to “please, just shower already,” and dousing them in Axe body spray and Febreeze.

Even the American Academy of Dermatology Association doesn’t disagree with their approach, saying on their website that children ages 6 – 11 only need a bath once or twice a week and when they get dirty.

However, the internet has something different to say. Suffice it to say, people are more than a little grossed out.

School teachers when Mila Kunis and Ashton Kucher come to drop off the kids pic.twitter.com/f0E3xX3Dry

me at mila kunis and ashton kutcher's house to save their kids pic.twitter.com/yNHrfJLnWq

And when it comes to how people feel about Kutcher and Kunis’s personal hygiene habits? Yeah, that’s a whole ‘nother level of nasty topped with “that’ll be a nope.”

Mila Kunis and Ashton Kutcher’s bathtub seeing them for the first time in 6 days: pic.twitter.com/iuqzwLDGnr

Me walkin past Ashton Kutcher and Mila Kunis in the streets pic.twitter.com/W3OwfptitJ

Now I understand the Super Bowl commercial where Mila Kunis was hiding from Ashton Kutcher in the shower as she devoured a bag of Cheetos, because she thought it was the perfect hiding place. pic.twitter.com/p8wDpW7hPY

The debate even spawned its very own hashtag – #showergate – when author Luvvie Ajayi Jones weighed in with her thoughts on social media and took a poll on Twitter of people’s bathing habits.

She shared the results and some of the ensuing comments on her Instagram page hilariously captioning it in part with:

It all started when Ashton Kutcher and Mila Kunis talked about how they don’t bathe them or their kids regularly. ALL THAT MONEY AND YOU NOT USING THE SHOWERS YOU PAID FOR.

It went to hell from there. If you want to pass clean out, check out my IG Stories from the past day, as people prove that humans cannot be trusted and handshakes should be cancelled forever. 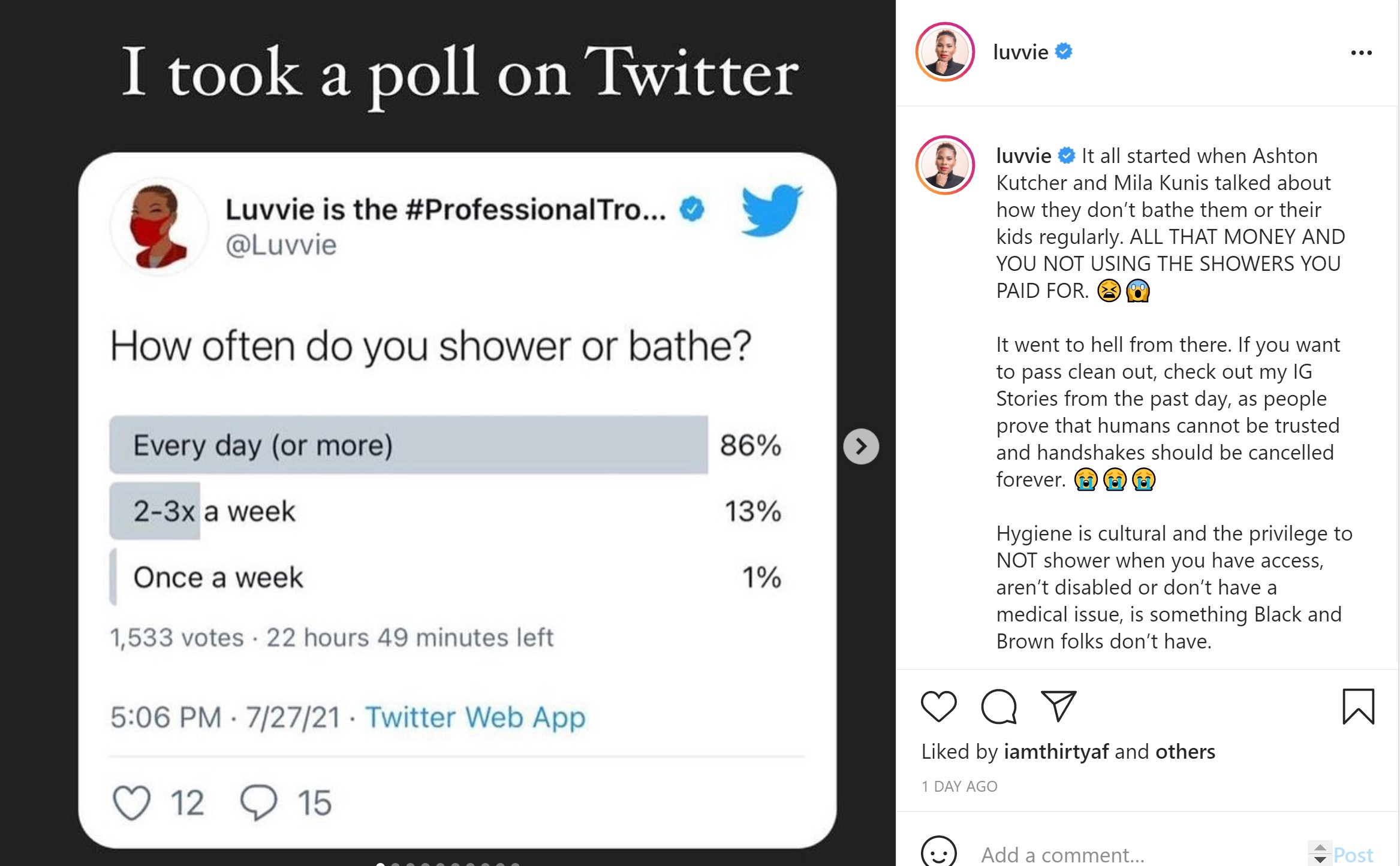 While the results show a resounding 86% of people shower or bathe daily, it is hard to discount the fact that 13% of respondents only shower 2 – 3x a week, and 1% only wash once a week.

And some of the comments will undoubtedly have you questioning the human race. 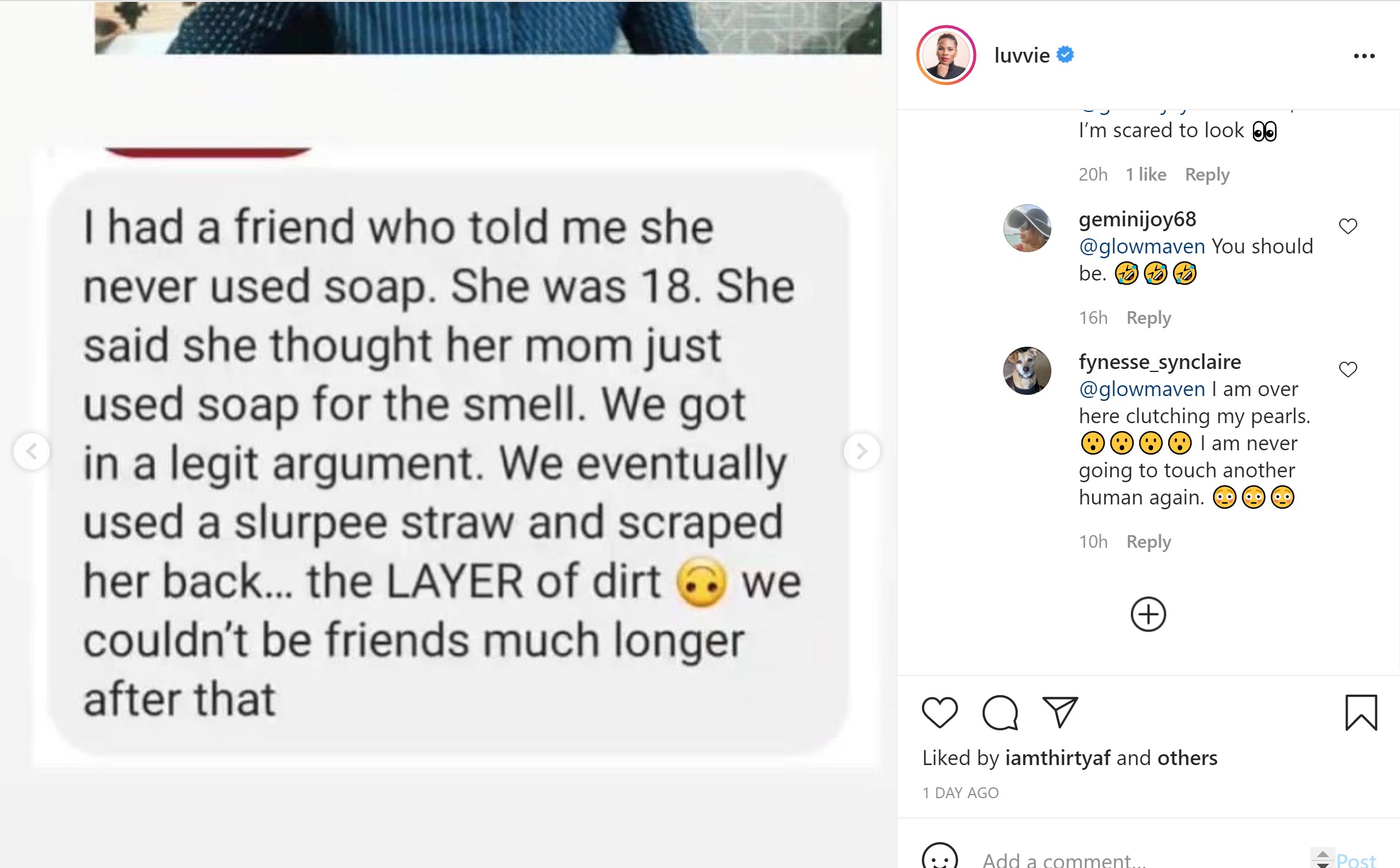 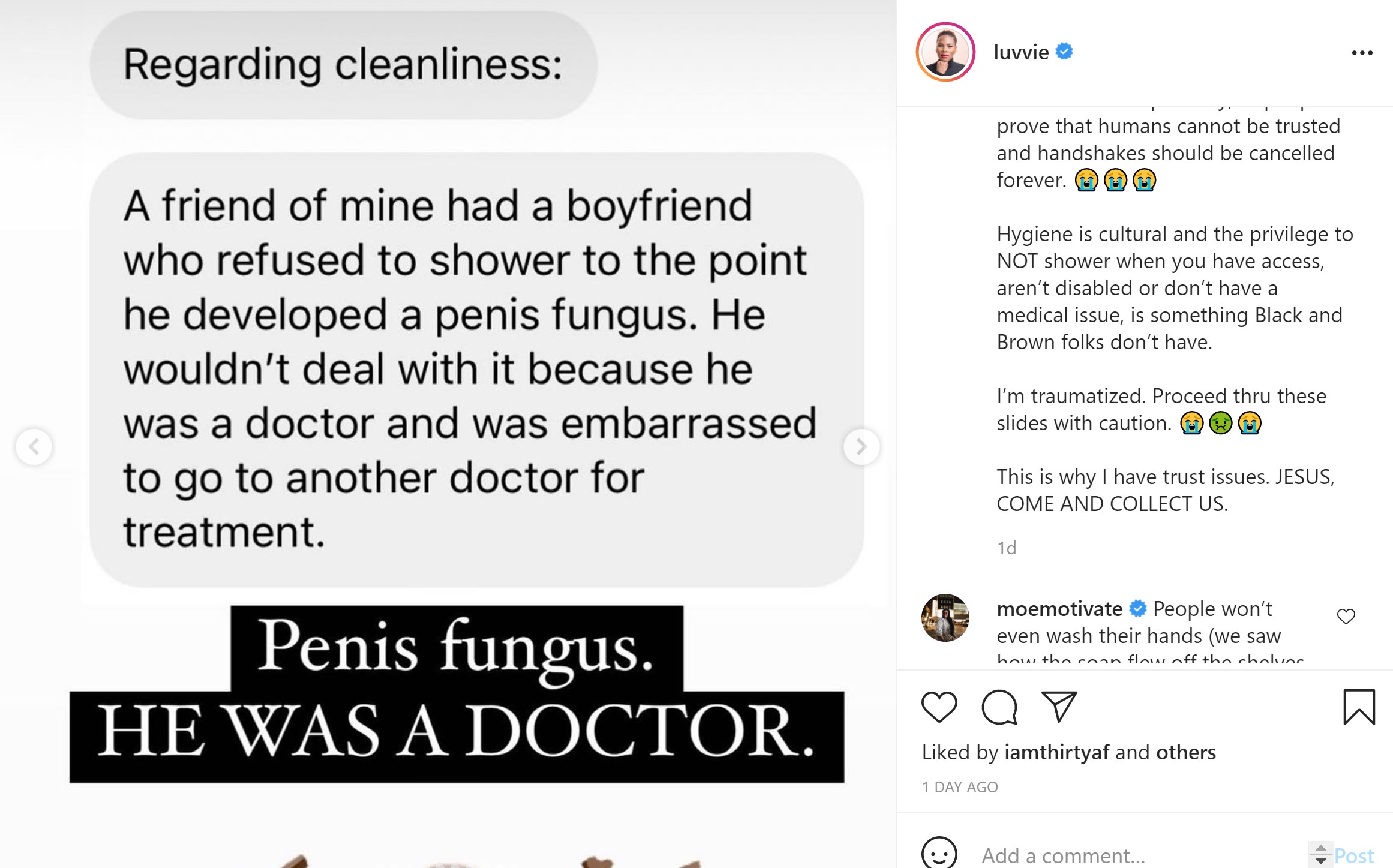 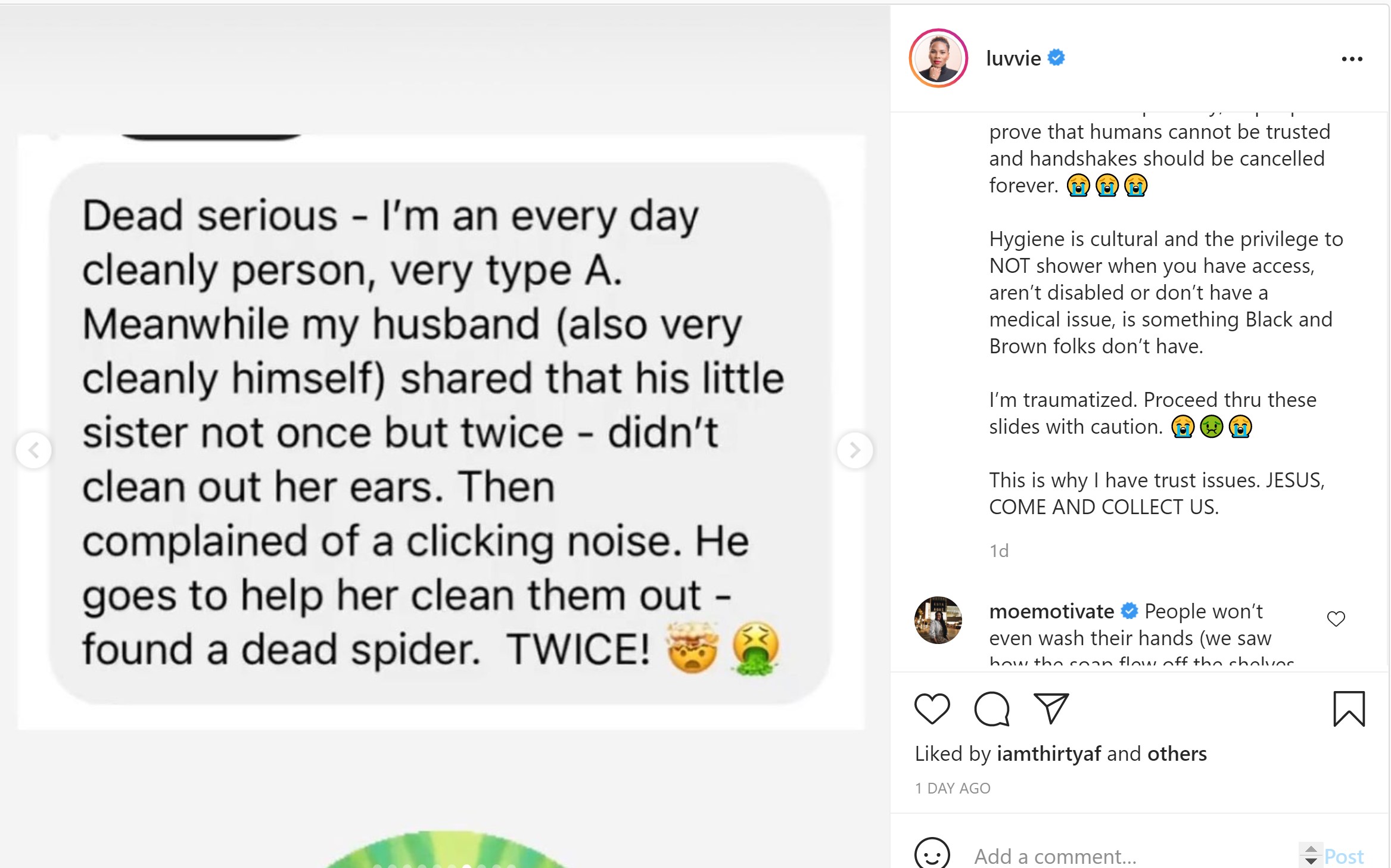 Also, it’s highly possible that Luvvie isn’t wrong when she says handshakes should be canceled forever.

Personal hygiene is just that. It’s personal. Everyone has the right to decide when, how, and with what they want to clean their own bodies.

Let’s just hope that if you happen to be stuck on a crowded bus or trapped in an elevator with no way out that the people you’re with are all part of the 86%.


Ohio Mom Warns Others After Her Kid…

If I asked you what the official recommendation for screen time limits is, would you say two hours? Because I … Read More

There Is Finally A Book For Kids Ab…

Many parents these days are snapping up mission-driven books for their kids. Books that teach inclusivity, acceptance of diversity, how … Read More