This morning I got up and had no idea what day it was. I also called my daughter by the dog’s name (not once BUT twice), lost my coffee cup, and spent a ridiculous amount of time looking for my cell phone to quickly google something…while I was TALKING on it.

So yeah, mom brain is REAL.

And no one knows this better than a mom of 4 kids under 6 from Minneapolis, Minnesota.

Emily Vondrachek has been celebrating her child’s birthday, ON THE WRONG DAY for 2 years, and this is both hilarious and relatable AF.

She shared her parenting faux-pas on TikTok (@thevondyfam) where it has gone viral with over 3M views,500K likes, and 18K comments.

She captioned it with ‘How’s your day going? #momfail #mombrain #parenting101 #sahm.’

“Here’s a little story to allow all the moms of littles out there to maybe feel a little better about yourselves.

Here’s a real confidence boost for you Okay, not for me.”

Emily explains that she discovered the error when she received a phone call from the pediatrician’s office explaining that they were having trouble billing her insurance for her 3-year-old’s recent check-up. Apparently, there was a discrepancy in his birth date.

She told the doctor’s office that her son’s birthday was on February 26, 2018 – but the insurance company had it listed for February 25.

Clearly, the insurance company was wrong. Obviously. She would know. She’s his mother, after all.

She tells the pediatrician’s receptionist as much:

Except his birthday IS the 25th.

(Behold exhibit #1 – Welcome to the world Henry Joel Vonrachek. On Sunday. AKA: Feb.25). 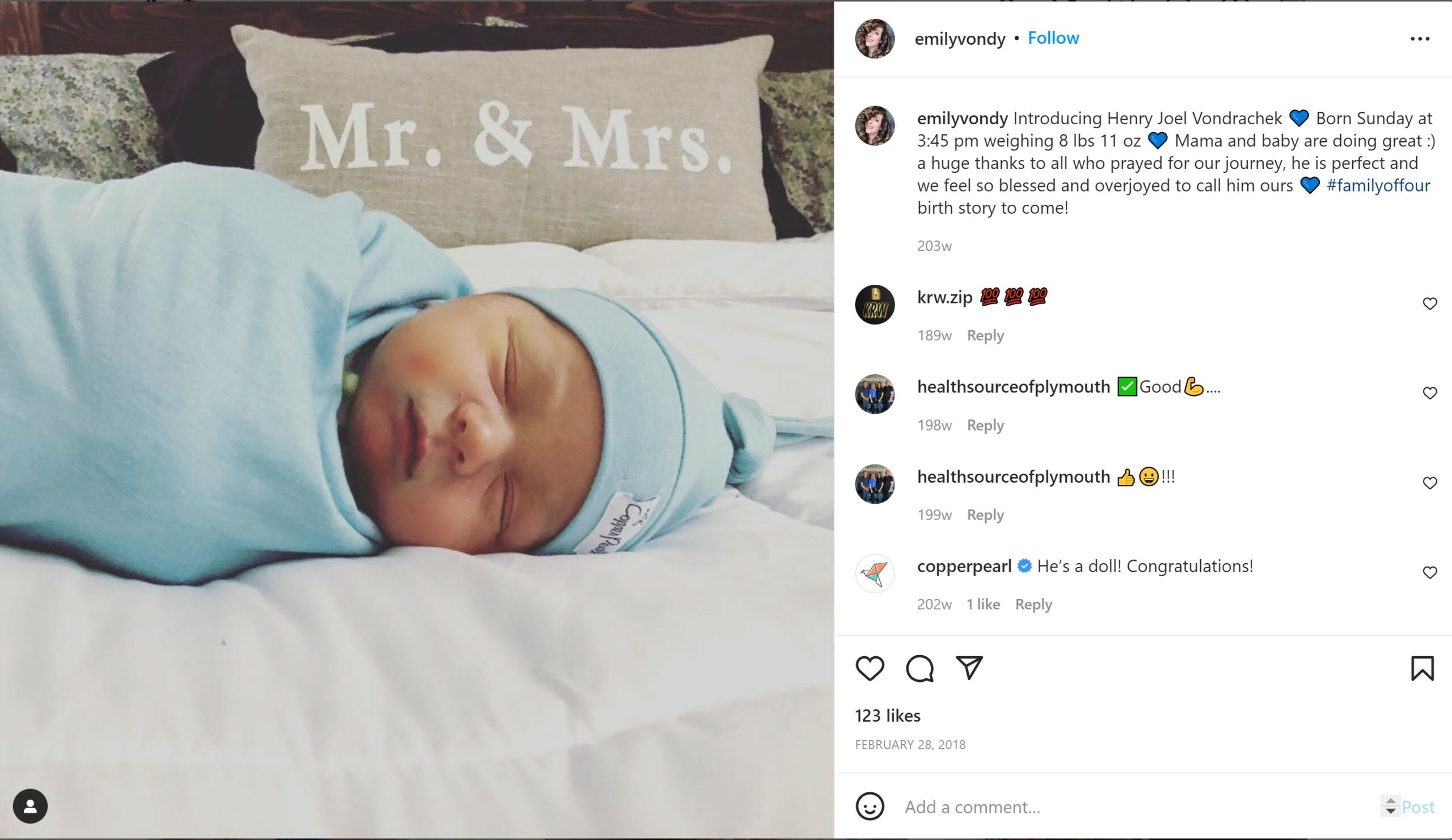 “I’m about to call up my insurance company to let them have it and I said, “Maybe I should scroll back on Facebook to look at the birth announcement years ago, to make sure.”

And it’s a good thing she did.

“I just got done doing that, and his birthday is indeed, the 25th.”

Thank the lord for social media, where would we be without it?

Emily then admits that this isn’t just a “one-off”. It’s been ongoing. For TWO YEARS.

To the point that for the past two years she has gone so far as to celebrate his birthday on the wrong day.

“For 2 years, I’ve been celebrating his birthday on the 26th!”

Bahahahahahahaha, I mean, at least she figured it out now, while he’s still young enough for it to not cause him years and years of therapy.

“You wanna know the worst part?”

The worst part is, it’s my middle child. It’s my Middle Child!”

Because OF COURSE, it is.

She ends her hilarious tale saying:

I love my kids, OK? I love my kids. They may not have their birthday celebration on the correct day but they celebrated the next.”

In an interview with Today Parents, Emily says that Henry’s due date was the 26th, which is why she might have gotten it wrong. Or it could just be because she’s exhausted. That too.

Look, we get it. And so do the people who have come out in droves to share their own hilarious mom-fail stories in the comments.

It’s hard to remember all.the.things. Things like faces. And names.

And whether or not you gave birth to a boy or a girl…who may or may not be named Ron.

Or Annie, who also goes by “Ellen” apparently.

It’s not just our kids’ names we forget…it’s our own names too. I blame it on motherhood. Who the hell even am I anymore?

However, it’s not just moms who are forgetful. Dads are too. Just ask Ashleigh. Ahhhh, parenthood.

As for Henry being the middle child? It didn’t go unnoticed. Middle children everywhere are now questioning everything they thought they knew. As they should.

But hey, it’s okay. Middle kids have been training for this their entire lives.

And if it makes Emily feel any better, she’s not the only mom out there to celebrate her child’s birth on the wrong day. Just ask OhMyCow, her mom did it. For 13 YEARS.

And then there was this poor guy. See, it could ALWAYS be worse.

Studies have shown that pregnancy results in a loss of gray matter in mothers’ brain areas involved in social cognition. Which explains a lot.

According to Dr. Cindy Barha, a women’s health expert at the University of British Columbia, mom brain isn’t all bad.

She tells the New York Times:

“Yes, we might have trouble recalling certain words or remembering the name of an obscure actor, but there are plenty of silver linings to the ways mothers’ brains change.

The upsides can include a heightened capacity to stay calm and focused during stressful situations, the ability to interpret what different newborn cries mean, and enhanced vigilance around potential dangers.”

I don’t know of any mom who can’t relate to Emily’s experience. So next time you forget why you opened the fridge, or you’ve been calling your child the wrong name, or you forgot to put on pants, or you can’t remember the date of your beloved offspring’s birth, just know, you’re not alone.

Trust us, we know.

I think it’s safe to say that after the past couple of months of living in pandemic hell, we are … Read More