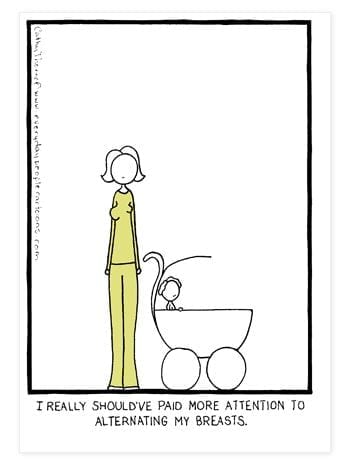 Like child birth, breastfeeding is a miracle. I swear by its power to properly nourish infants and keep sickness at bay. Proof is in the little army that I’ve been raising for 22 years. The one child I did not breastfeed is constantly sick, and when I say sick, we’re talking was in a coma for a week and almost died illness. He’s also the one that will eventually be responsible for my vacation in a vibrant white room with contemporary padded walls. Martini, please!

Despite my advocacy of breastfeeding, I have to admit, many aspects of it suck. Completely. Totally. Makes. Me. Want. To. Flip. My. Shit.

Let’s start with the nipple geyser. Or that wonderful tingling feeling called “let down”. My newborn almost choked to death one night because the geyser ejected so turbulently–like Old Faithful on steroids. Whenever I feel it coming on, I scramble for spit up rags, a towel, cups…anything that can contain the beast. I also warn everyone who might be in the direct path to duck! Cover your eyes! Or you’re going to get one lactose shot straight up! Too late? You end up like a human Cheerio, covered in milk.

Another thing I love, those handy dandy breast pads–that are made for women with quadruple A cups. Seriously? Can you possibly make them a little bigger so we nursing mothers are not forced to place pressure over the geyser like a blood-gushing wound? They hardly qualify as pads. Breast dots is a more accurate representation.

Never nursed? Never seen nursing in action? You might be surprised to hear that milk doesn’t come out of a single hole like a bottle. Nope. A human nipples is more like a massaging shower head, less the awesome massage action. There are multiple holes shooting in every conceivable direction.

Engorgement is another wonderful reality of breastfeeding. Miss a feeding or pump session (or three)? Be prepared for la breasts to become la boulders–and not in a “Wow. Look at these natural implants!” kind of way. Think deformed, lumpy…rocks.

And then there’s the “forgot to switch sides and that looks freakin’ awesome in a fitted t-shirt” dilemma. It’s like you stuck two balloons down your shirt and one popped. Lopsided is an understatement. Try cockeyed tits.

But at the end of the day, breastfeeding is great for baby and great for bonding. I do recommend it, and would do it again in a heartbeat (which will never happen because I sent my uterus on a permanent vacation to That-thing-is-never-coming-near-my-thing-again Land.)