I’ve been hitting the gym as of late, and was pretty excited to finally run my first mile in under eight minutes recently. And I was proud of that little feat… until I heard about THIS guy.

Just when you think you’re making progress on your own little fitness journey, along comes a dude that not only blasts your speed record for running -on a trail, out with nature & bugs and stuff, nonetheless- but fends off a mountain lion attack while doing it by killing it with his bare hands.

An unidentified male was running the West Ridge Trail at Horsetooth Mountain Open Space near Fort Collins, Colorado on Monday when he was attacked from behind by a *young* mountain lion.

(*I love that the lion was referred to as “young”, as though I’d have a better chance of not dropping dead from fear if I was being chased by a “young” mountain lion rather than an “adult” mountain lion.)

As reported by NBC News, the lion pursued the runner before lunging at him, biting both his face and his wrist.

You know those nightmares you’ve had when you’re running from something that’s chasing you? That actually happened to this guy- the “something” not only caught him, but chewed his face.

The man was obviously injured and hospitalized. At this point, my lungs, which would already be working overtime from the trying-to-get-air-so-I-don’t-die-while-running part, would be releasing blood-curdling screams as I curled up into a fetal ball to await my inevitable demise at the jaws of the LION that bit me from behind.

But not Running Man.

According to Rebecca Ferrell, spokeswoman for Colorado Parks & Wildlife, here’s how the encounter unfolded:

The man was bitten on his face and wrist before he managed to pick up a rock and slam the animal on the head. He jumped on the animal’s back and choked it to death with his hands, arms, and feet.

Ok, the rock I understand. His survival instinct kicked in, and he tried to ward the lion off with anything nearby that could be used as a weapon of self-defense. But then…

He jumped on the animal’s back (I’m visualizing some sort of wild, bull-riding scene unfolding here), and CHOKED IT TO DEATH WITH HIS HANDS.

What kind of superman-like creature is this guy?? His identity has yet to be released, so I guess we’ll have to wait to find out.

The mountain lion clearly underestimated Running Man; while the lion died of suffocation, the man was transported to a local hospital with non-life-threatening, but serious injuries.

Local trails have temporarily been closed by the State Wildlife Department after rangers spotted more lion activity in the area.

Can you imagine this guy’s first day back at the gym?? “Sure, that’s an impressive mile time. But did you run that while being chased by a lion, choking out that lion, and sprinting the last 1/2 mile while dripping face-blood? CAUSE I DID.”

Seriously, Running Man deserves some serious props for his heroic act of self-preservation, and if it were me, I’d want the whole world to know my name- wouldn’t you? 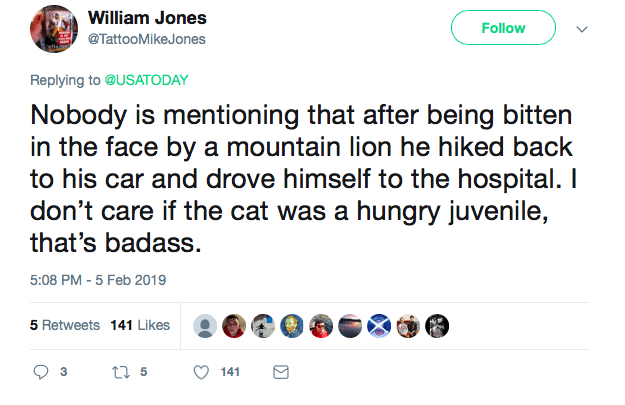 And are even suggesting he include “killed a mountain lion with my bare hands” on his Tinder bio.

He should put this story on his tinder bio https://t.co/9XRB62tVF9

But, seriously – who IS this guy? And did he look like this when it happened? We need to know more.

How i imagined he looked as he strangled a mountain lion. pic.twitter.com/Hmo7mPj8xl

A state wildlife official then offered advice via NBC News that 99.9% of us will hopefully never, ever need:

In the event of a lion attack, you need to do anything in your power to fight back, just as this gentleman did.

But, the truth is, we’re more likely going to be chasing squirrels rather than mountain lions. And we’re happy about that.

To my friends that don't live in Colorado: I have never killed a mountain lion with my bare hands. I did chase a squirrel off the front porch yesterday, tho.

So you can opt for Running Man’s “killer” cardio workout, or you could just skip the whole outdoor/wild predators thing & stick to a nice, safe treadmill.

Ohio Mom Warns Others After Her Kid…