We all love to watch an engaging race. Runners barrel down the track, each striving for the finish line; but imagine you notice someone lagging behind. Maybe they even trip, and their race that day is obviously lost. Most people would still offer encouragement instead of disparage the runner. So, why not validate yourself and stop being your own worst critic?

When completing errands with three kids, ages five and under, I often feel like I’ve enlisted in a race of my own. As I sprint through the store, cart full of kids and food, I offer snacks and distractions with a fleeting glance at the clock. Accompanied by the occasional withering look, I am often told, “My, you sure have your hands full!”

Selective about engaging in conflict, I tend to keep my head down in public; however, twice in one week, I was verbally accosted by men criticizing my parenting, which triggered explosive, uncharacteristic reactions. Although I felt empowered by defending myself, my response to these interactions felt unresolved. Only after additional introspection was I able to pinpoint the true cause of my continued turmoil.

The first incident involved an older man who chastised my screaming child. Astonishingly, he also threatened to call Child Protective Services because he thought I was teasing my daughter, when in actuality, I had been trying to correct her behavior. Completely floored by his aggressive accusations, my response escalated. It was only after three store managers joined the altercation that he was asked to move along.

Six days later, anxiety built in my stomach as I loaded my little ones into the shopping cart. Once again, while trudging through the final aisle, a man in his fifties looked me in the eye and said, “Well-mannered kids.” His sarcasm was almost lost on me, since I didn’t feel that my two kids skipping and tapping packaged food was unreasonable. Not great behavior, but they were happy and keeping to themselves; and I had merely two items left on my list. Nonetheless, this stranger pointedly added, “It’s a shame,” as if my kids represented the horribly behaved children of this generation, and I the parent who failed to teach them.

Livid. Fueled by my previous encounter, I heard myself deliver a cutting retort that I would later regret. These back-to-back conflicts weighed heavily on me, brewing inside until I sobbed to my husband.

“It really must be me. And our kids must be the worst,” I spewed, not really believing it and yet… I had to consider those words true to some extent for these emotions of hurt and confusion to overcome me. I believed their hurtful words. But I didn’t blame my children.

Me. It was my fault. People had the right to say cruel things to me because I was a bad mom who couldn’t keep her unruly children under control.

Mothers can attest that we are our worst critics. Like a tollway, we collect our failures one token at a time, tossing them into our backpack without thinking: Losing our tempers. Another dinner out of a box away from the table. Guilt from ongoing “mommy wars” of what method of discipline, feeding, and playground parenting is best…

clink-clink-clink. The tokens fall, piling one on top of another.

To make matters worse, strangers judge our parenting from the few struggling minutes they share with us in public places. Self-reflection caused me to question: When strangers’ comments upset us, what is the root cause? Does it hurt because we really care what a stranger thinks? Or is it because we have already adopted that negative belief into our life, and they are simply voicing our own self-criticism? In my case, honesty required me to acknowledge that I’d been battling such damaging thoughts long before these unpleasant encounters.

We cannot alter a stranger’s ill-mannered behavior, but we can choose to reject their words. Further, we must dump those tokens and refuse to shoulder our own personal judgment—for they weigh us down and spark our reactive emotions. Don’t give criticism power by attaching it to faulty belief. Instead, practice asking yourself these tough questions: Why do their words hurt me? What am I accepting from a stranger and consuming as truth? 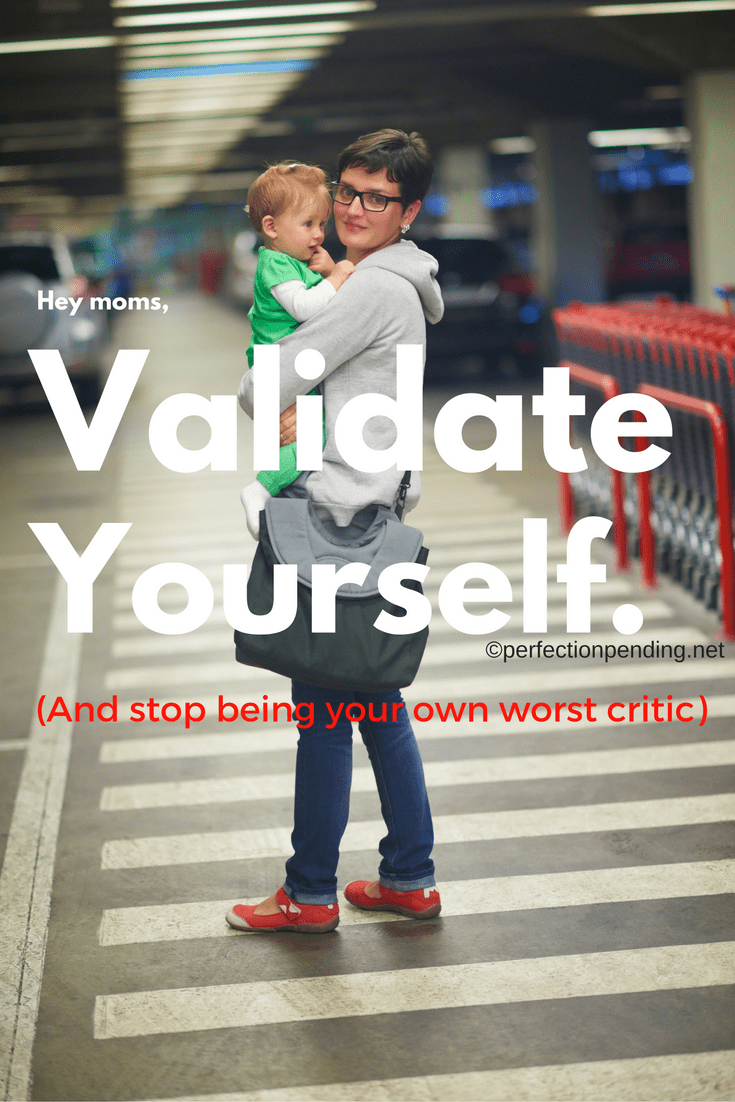 Mothers, every day can feel like a race; however, the race should not be about speed or comparing ourselves to others. We are runners, often weary, yet ever aspiring to reach our goals. We deserve encouragement from the crowd. Most importantly though, we owe it to ourselves to recognize our strengths, to love ourselves despite the occasional negative turn of events.

Just recently, as I fought to buckle my thrashing three-year-old into his car seat, I refused to look around me, for fear of what onlookers might say. After the final strap clicked into place, a fellow mother called out to me, “You’re doing a good job, Mama.” Tears of appreciation welled inside me as I said to her, “Thank you. I haven’t heard that lately and it means a lot.”

As I sat in the car amidst the wailing, I checked in with myself. Receiving a compliment from someone else offered comfort and satisfaction, but how long since I’d given one to myself? The most important validation should come from within. Words from others are simply icing on the cake.

So when you’re making your lists of to-dos for the day, set aside another column that reads, “Kudos to Me”. This list of affirmations has nothing to do with what you’ve completed and everything to do with loving yourself and your efforts, no matter how the day goes.

Take off that backpack. Empty those tokens.

Erica Kiefer’s debut novel Lingering Echoes was published by Clean Teen Publishing in November 2013. She continued the series with Rumors (A Lingering Echoes Prequel) and her newest release Vanishing Act. All of her books can be read as stand-alone contemporary YA fiction, touched with romance, emotional drama and suspense. With a degree in Recreation Therapy from Brigham Young University, Erica’s experiences working with at-risk youth have influenced the realistic and relatable nature of her writing. Her first inspirational non-fiction entitled Borrowed Angel (published in April 2014 with Currawong Press) describes the loss of her infant son and her journey towards healing.

Married since 2005, Erica resides in Las Vegas, Nevada with her four children and can often be found satisfying her sweet-tooth with chocolate-chip cookies and a glass of milk. Now and then, she dusts off her collegiate rugby skills and dives back into the game. Visit her on her website at www.ericakieferbooks.com or on Facebook.


Grab Your Tissues Because This Youn…