Filter Free Parents
Home Relationships Marriage Survey Shows Half of Men Say They Do Most of the Homeschooling,...

If the pandemic has you swearing under your breath about the amount of effort it takes to get through a day thanks to homeschooling and extra chores, you’re not alone.

Women across the country are feeling the strain of inequity right in their own homes.

Even though many parents who are on lockdown and who are sharing the workload of running a house, raising the kids, and doing their jobs remotely say they feel stressed from the amount of work on their plates it is women who seem to be doing more than their fair share.

The New York Times has released the results of a fascinating survey in which they asked 2,200 American parents to admit who is doing most of the homeschooling during the pandemic.

Perhaps not so shockingly, 80% of women respondents reported being doing most of the homeschooling. But surprisingly, 50% of the men said that they were doing the heavy lifting.

Wait. What!? Is this common core math at work here?

The question was “Who is spending more time homeschooling your children or helping them with distance learning?” and the results are truly something to behold.

The responses are markedly different when the moms get asked the same damn question.

The New York Times also reported that women are overwhelmingly doing more housework and child care than their spouses. 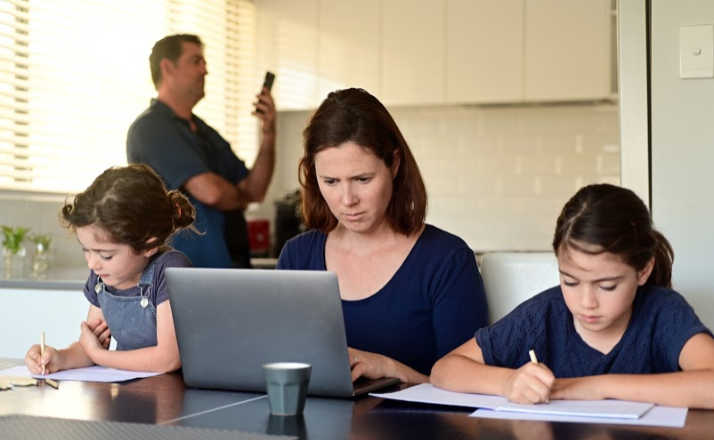 But they also report that men apparently “see it differently.”

It’s not a secret that women have long been the default workhorses when it comes to raising families.

The cooking, cleaning, academics, and nonstop grocery shopping rarely falls to men and it seems that men aren’t totally comfortable with that fact and so they routinely exaggerate their workloads when asked by researchers.

This isn’t just reflected in this NYTimes piece but also in an upcoming survey of domestic labor throughout the current pandemic.

Research conducted by Daniel L. Carlson at the University of Utah shows similar exaggerations by men.

“Being forced to be at home is amplifying the differences we already know exist, what terrifies me for the future is if it will push women out of the labor force in a way that will be very hard to overcome,”

Barbara Riseman, a professor at the University of Illinois at Chicago told the New York Times.

We can do better than this. Men need to roll up their damn sleeves and pitch in to help more. Period.


School Board Calls 911 After Angry …

We’ve rounded the corner into year two of living with Covid-19. It’s been a looooong year of wearing masks, buying … Read More