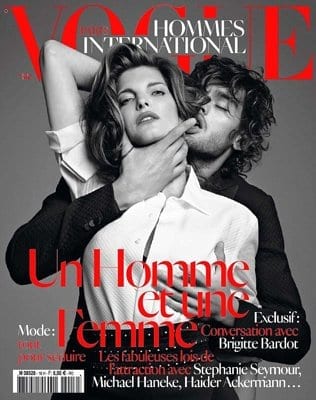 Am I the only woman on the planet who finds this image sexy rather than offensive? Seriously. When I first looked at this cover of Vogue Hommes magazine, I didn’t see violence. I didn’t see a woman being choked out against her will. I saw another sexual revolution unfolding. Here we have this obviously much younger man passionately taking control – or the lead, if you will as not to offend – of this obviously much older woman. He is not demonstrating aggression, rather assertion. She is not resisting, but embracing.  A little bit of research confirmed my interpretation. The image depicts a lover’s embrace between models Stephanie Seymour and Marlon Teixeira. She is 41, while junior is a mere 21-years-old. It’s titillating and satisfying for those in similar relationships, myself included. I’m a middle-aged woman married to a much younger man. I have always loved the fact that my husband has never been intimidated by the years I have on him. He has never been afraid to take the lead in any situation. As an older woman, I find that very attractive.

While I sympathize with those crying foul and bringing up violence against women, I just don’t see it here.  I am not familiar with this photographer or his or her previous work, but I am guessing it is probably every bit as controversial – which may have resulted in misconceptions about this particular shot. Or it could be the simple fact that any image – no matter how innocent or suggesting – is open to interpretation.

And let’s face it. This is Vogue. Vogue has always been edgy and taken risks with its cover shots.

Sexy or offensive? What’s your take?

We all know by now that being an adult is no picnic. To an extent you’re in control of your … Read More