Teaching our kids about consent is one of the most valuable life lessons we can give them. It empowers them to take control over their own bodies, set boundaries, and lays the groundwork for healthy relationships as they get older.

But at what age should we start teaching our kids about consent? And under what circumstances?

Is telling your toddler to give a family member a kiss or a grandparent saying, “Give me a hug,” a breach of consent?

One mom from Australia is saying yes. Yes, it is. And she’s not holding back.

Brittany Baxter has gone viral on TikTok with an impassioned message aimed at the adults in her daughter’s life who balk at having to ask the one-year-old permission for a hug or a kiss.

Her post regarding consent has been viewed over 450,000 times and has garnered over 46K likes and 2K comments.

I said what I said… #gentleparenting #consent #fyp

She starts off by saying:

“As a parent I practice consent with my daughter and something has been really bothering me lately so I thought why not take it to TikTok so we can talk about it.”

Baxter has been teaching her daughter consent almost “since the day she was born.” Part of her teaching includes “normalizing the fact that kids DO NOT have to kiss and hug adults.”

This means that the adults in her child’s life, including grandparents, aunts, uncles, etc., have to ask for hugs and kisses rather than just taking them.

And clearly, not everyone is on board. She is repeatedly having to explain her rationale behind establishing the consent rule.

“My daughter’s almost two years old and I’ve been in the process of teaching her consent basically since the day that she’s been born, and I find it really f**king unhelpful when the adults in her life are like ‘What?! We have to ask for a kiss and a hug?’, even though I’ve explained why multiple times.”

She goes on to describe what happens when the one-year-old does say “No.” And apparently, no doesn’t really mean no.

“And then when she says no, they’re like ‘Oh she doesn’t love me my feelings are so hurt’ and then they proceed to overstep her body boundaries anyway.”

Baxter is obviously frustrated with what she views as a complete lack of respect for her young daughter’s bodily autonomy.

And the biggest perpetrators? The grandparents. And she’s not afraid to call them out. 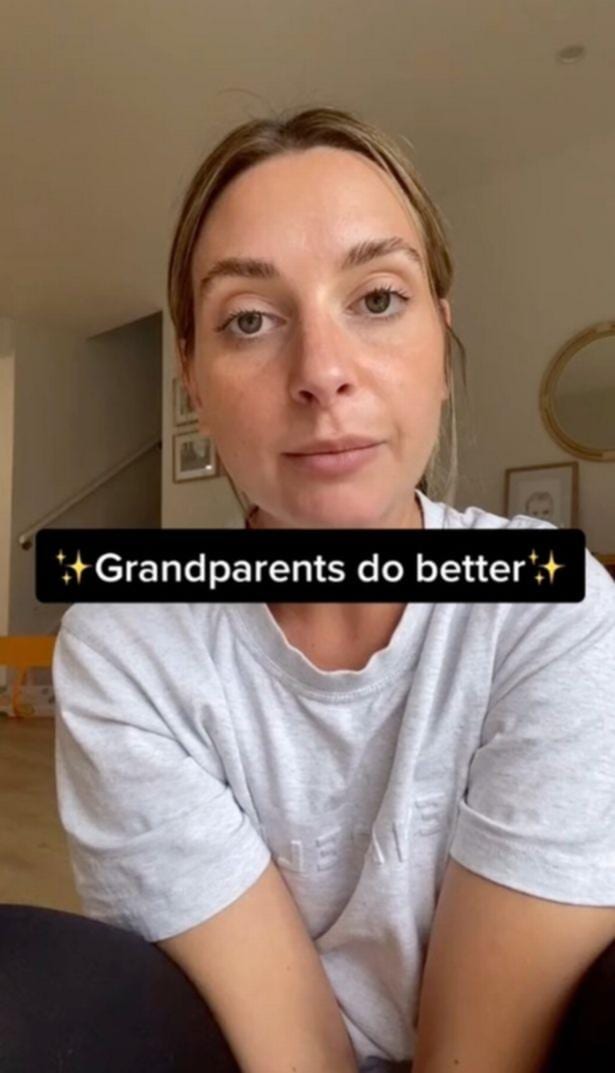 Baxter makes it clear that it isn’t her daughter’s responsibility to make them happy and that the “older generation” needs a lesson in emotional regulation.

Baxter ends the video with the declaration that no one’s feelings will ever override her daughter’s right to her own body.

She also promises that her daughter will know how to say “No” and that when she does say it? It will be respected. Every single time.

2. She doesn’t know what it looks like for her no to be respected. Grandparents Do better.”

Response to her video has been mixed with commenters on the post divided.

Some people applauded her stance and thanked her for sharing:

Other commenters took it one step further declaring, “Me too!” and shared their own stories of raising their kids similarly:

And their own negative experiences surrounding consent growing up:

Even extended family members chimed in saying that this is something they already do with their nieces and nephews:

But even with all of the support, it’s clear that choosing this path doesn’t come without challenges.

Some commenters were quick to point out their own struggles in attempting to implement the same boundaries with their own family members.

While others popped on seeking advice, begging the questions:

Thereby prompting Baxter to create a follow-up TikTok in response.

Reply to @britwolfe13 I hope this makes sense ??

However, for all of the comments supporting Baxter’s stance, there were just as many against it.

While many didn’t take issue with the message of consent, they vehemently disagreed when it came to the grandparents.

Teaching consent when it comes to strangers and other adults? YES. Telling the grandparents they can’t touch their grandchild without asking first? NO.

Commenters also came to the defense of their own grandparents. They revealed that they grew up with grandparents hugging and kissing them and it had zero impact on their ability to say “No.”

One guy agreed that laying the foundations around consent could be effective but not at such a young age.

For all those NOT in favor of making grandparents ask before touching, one commenter had this to say:

In an interview with 7 News, Baxter elaborated on why she makes family members ask her daughter for permission before touching her. She believes that “consent starts in the home.”

What do you think? Do you agree or disagree with Baxter’s approach to teaching her daughter about consent? Would you set this rule in your own family?

Mom Creates Graph Of Every Fee…


People are Outraged that Restaurant…

For most of us, Sesame Street has played a key role in our childhood memories. The show has exerted vast … Read More

As parents, we want nothing more than for our kids to be healthy, happy, and safe. We send them out … Read More