Hey friends, it’s me again, Booty Betty. You all responded so well to my last post about just what to expect when you visit a proctologist that I felt like it was my duty to prepare you for the most important photoshoot of your life – the colonoscopy.

The colonoscopy is a selfie we can all get behind, a picture that says way, way more than a thousand words.

We know we need them, we know they’re important, but for some reason the idea of colonoscopies conjures up images of wrinkled old men and garden hoses, not the fit, trim, always-Instagram-ready young ladies like myself. (I’m writing this anonymously and people have seen inside my butthole. Let me have this.)

When it refused to heal, my fart box fondler (proctologist) said she wanted to perform a colonoscopy to make sure there wasn’t anything sinister going on farther up.

That meant I had to pillage the village, empty my innards, and rid myself of everything to make room for… something.

First off, allow me to provide you with some relief in case you find yourself facing a similar stink wrinkle invasion soon – prepping for the colonoscopy is nowhere near as bad as you expect.

I’d heard horror stories of grown men being lifted off their toilet seats by the sheer force of their diarrhea, middle-aged people catching glimpses of chewing gum they’d accidentally swallowed in third grade.

Tales of stomach cramps and ruined pants, bowel movements that made it into the Roto Rooter newsletters.

Maybe the people sharing their experiences didn’t have the hearty millennial bowels of someone who grew up on whatever abominations Taco Bell has thought up.

Maybe the people sharing those stories had never pooped more than a few rough pellets, like a goat in a petting farm.

Or maybe I just have undiagnosed IBS and I’m used to things pouring out of my butt, but no matter the circumstance, the prep wasn’t as bad as expected.

First of all, considering I was prepping for a colonoscopy – there honestly wasn’t a lot of poop

It takes a few hours for the laxative to kick in, and you kind of feel like a kid waiting up for Santa  – You know what’s coming, you just don’t know when, and you have no idea what you’ll get!

Just when you start to think you have enough time to watch an episode of anything, you’ll hear your stomach rumble.

This is not your body crying out for food.

You’ve put a lot of thought into the clear soups and jellos that will keep you from starving while you dream of roasts and pizzas and whatever abomination Taco Bell is currently advertising.

Your stomach isn’t asking to be fed. It’s sounding the alarm.

From the moment you hear the first rumble, you have approximately 12 seconds to make it to the bathroom, pull down your elastic-waisted pants (zippers are a constipated man’s game), and launch that butt shuttle into the bowl. And it will launch.

You don’t even have to strain. Your body does all the work. You just have to stay upright as you bust a grumpy, bomb the bowl, and drop it like it’s hot.

“But Booty Betty, I thought you said it wasn’t that bad?”

It’s not, dear friends, truly. It’s not that the pooping requires much work, or even that there’s just so very much of it. It’s the wiping that will take you down.

After about the 10th time wiping down the downtown, you start to get a little raw.

Do not give in to the temptation to simply flush and air dry over the commode in an attempt to avoid wiping. By the 15th wipe you start to wonder if your eco-friendly toilet paper is recycled from sandpaper.

By the 30th you agree with Dwight Schrute, that the modern anus is entirely too coddled. But remember – in a matter of hours, a room of people is going to see your butthole, so wipe you must.

It helps that once your butt starts peeing more than plopping, you really just need to dab at your go go hole.

Try this super cool pro tip – have a fan of some sort that you can use to blow cool air directly onto your aching anus. An oscillating fan works if you can bend over far enough, a handheld fan works if you have one that is powerful enough, and a novelty Chinese folding fan won’t work at all unless your arms are 8 feet long.

Before you use that super cool pro tip, however, be sure to close the door so you don’t have to explain to anyone who might walk in why you’re giving yourself a windy wedgie. 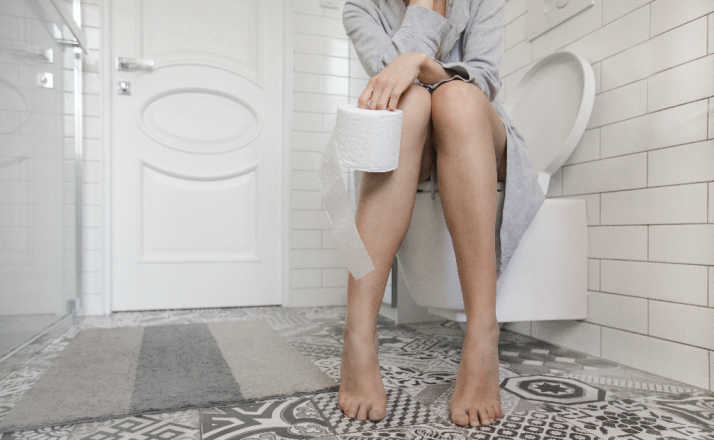 You’ll reach a point during prepping for a colonoscopy, where you’ll no longer recognize what’s coming out of you as a solid.

My doctor told me that once my butt peed out what looked like apple juice, I was good to go. And oddly enough that wasn’t the strangest sentence she’s said to me. Once your innie becomes an outie and your farts require splash zone seating, it’s time to stick a camera up your butt!

Be very careful not to take in anything – anything – hours before your procedure.

I wasn’t kidding about the splashy farts. Your mud trumpet has lost the will to squeeze by that point, and whatever goes in you will pretty much just fall out. This also applies to laughing at jokes, so don’t let your partner ask you what a cannibal does after he dumps his girlfriend. (He wipes.)

When I signed in at the medical center, I announced that I was there for the photo shoot. I was really proud of that one, but no one laughed.

Thankfully, the anesthesiologist, everyone’s favorite doctor, got a kick out of it when I told him I was ready for my close up. Feel free to try those out or work on your own lines, I’m sure the staff loves the material.

I was rolled into an operating room where I laid on my side, was put to sleep, then I woke up not too long afterward mumbling something about the Backstreet Boys and really needing to fart.

I wasn’t sore from the invasion of the camera, I wasn’t too nauseous from the anesthesia, and the initial results were good.

Overall it wasn’t a bad experience! Definitely not anything to fear, nothing to put off, and easy enough to recover from.

The process of turning turds into wine takes the longest, so you will need two full days off work to devote to the procedure and prep, but once you’ve wiped yourself raw and exchanged pleasantries with a group of people who have literally been up your butt and around the corner, you get a nice afternoon off and an empty colon that’s just waiting to be filled with whatever abomination Taco Bell is advertising in the window.

I can’t say I’d recommend it, but for your health, and for the jokes alone, definitely don’t avoid it.

As parents, we want to give our kids the best we are capable of giving them- we want them to … Read More