One of the most predictable things about parenting is that kids are unpredictable. They have a way of doing their own thing… regardless of whether or not you’re trying to do YOUR own thing.

You know the type of moments I’m talking about. When you’re in the bathroom, and a kid crashes in to ask for a snack. Or the times when you’re on an important work-related phone call, & your kid picks up the extension to tell you his brother farted.

(Yup. That happened in my house. Sadly, more than once.)

Kids love to interrupt what their parents are doing- just because they can.

They just love to sneak in some quality time with Mom, even if Mom is in the middle of discussing world events. On live television.

MSNBC news anchor Courtney Kube’s son unintentionally created one of the cutest moments in recent live news when he spontaneously popped on-screen during a live broadcast to hang with his mom.

Kube is a well-respected television journalist for NBC News, having served as an investigative reporter, military news correspondent, and news producer throughout her impressive career.

But she’s also a mom to twin 4-year-old boys, and as working parents know, sometimes juggling multiple schedules can be complicated at best.

As Kube explained when interviewed about the clip, scheduling issues required her to bring her sons to work with her that morning:

Breaking news in Syria didn’t line up with preschool drop-off, so he and his twin brother were with me.

So Courtney brought her sons to work with her.

Obviously her work involves reporting on current world news event on live television, which is exactly what she was doing while her boys were waiting in the wings.

But one son decided to get in on the action. Literally.

Just as Courtney was discussing Turkey’s invasion of Syria… a tiny boy head popped up in the lower corner of the screen:

The little dude appeared to be momentarily enchanted by seeing his own face on the screen, but the point of his little drop-in was of course to hang out with Mama.

So he reached out with an excited, “Mama!” and reached for Courtney. That’s his mom, and he was going in for some sugar- cameras be damned! 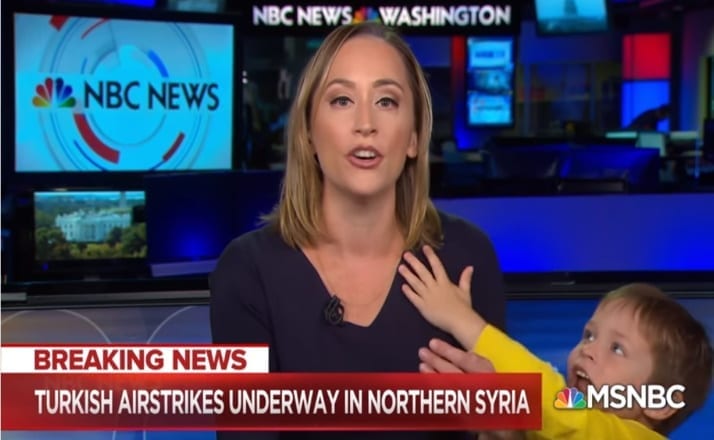 I’m not sure how I would have responded, but I can guarantee that it would have looked WAY more awkward than Courtney did.

Maybe her journalistic training automatically kicked in? I’m not sure how she kept it so together, but in response to her son’s impromptu pop-in, Courtney smoothly smiled & said:

Excuse me, my kids are here, live television.

The broadcast then cut abruptly to a map of the Middle East, though I’m betting the majority of viewers were way more interested in seeing how the station managed to finagle Kube’s son off-camera.

To her credit, not only did Courtney manage to peel her son off her without skipping a beat in her Turkey talk, but there was no loud squawks of protest from her 4-year-old, which is pretty damn miraculous.

If you want to catch Kube’s son is his adorable, mom-loving glory, here it is:

While it was only a few seconds of live airtime, MSNBC shared the clip on Twitter to point out how #workingmoms handle the unexpected like true bosses.

People loved it. Sure, they enjoyed the sheer amusement of it, but people appreciated that a news station was supportive enough to allow an employee to bring her children to work in the first place.

LOVE this!!! Must an awesome studio, that they let her bring her son in to work. That’s the kind of flexibility that makes for a great work environment. And she handled the interruption like a true pro!!!

(She really was as cool as a cucumber, which was impressive!)

Moms definitely DO get it; being a working mom can feel like trying to walk a tightrope. Only you’re blindfolded, and the rope is on fire. It can be total chaos, but moms still make it work, and look good doing it!

And some dads have to deal with their kids crashing their important live-television interview… remember this hilarious bit of kid-chaos??

Loved it. Reminded me of Robert Kelly. ? pic.twitter.com/gjSh8i2CbR

Oh, the joy- the sheer JOY of watching that little girl strut on in during her father Robert Kelly’s live discussion with the BBC!

I love this. Real people having real everyday challenges. I’m also glad MSNBC allows correspond. to bring their kids to work with them.

This is real life. It also points out the stark reality the impoverished people in Syria have vs what goes on in our comparatively priv lives.

This IS real life. And I love that this commenter not only addresses the fun kid moment, but the actual political issue being discussed in the first place.

The last word I heard was “Turkey”- once her son popped in, world events took a backseat to “What will this kid do next??”

The next @MSNBC “This Is Why You Watch” commercial.

Seriously. If there was the chance of this kind of unexpected antics, I’d be glued to their broadcast!

The older I get the more I understand that women are the fabric of society in the sense that they are consistently and tirelessly holding families, friends and companies together to make the world a better place and carry on regardless if they get the recognition they deserve

Chaz wins the prize for “Best Comment EVER”. Nailed it, Chaz!

The interruption illustrates the reality that even at work -a live television broadcast in this case- we are still parents.

And there are times when our two roles collide, requiring us to adapt quickly. Real life happens. And keeping a sense of humor about it makes it much easier!

I’m not sure how Courtney’s kids managed to be so close to a live set, but the spontaneous moment made for heartwarming “news”.

Kids Use Ring Doorbell to Talk to D…