Although having your first baby is an amazing experience, it can also be a roller coaster ride of emotion. It can take awhile for both you and your husband to settle into parenthood, & how you do that definitely affects your relationship, too- for better or for worse.

While some guys jump right into the fray and know exactly how to handle this new stage of life, others are clueless as to how they can be truly supportive once their child is born.

(Or pretending to be… like when you “sleep through the baby’s crying”… we know you’re faking it, dude. Just like we KNOW you’ve got your phone in there when you’re taking your 45 minute bathroom “break”, too.)

Guys, your step-by-step instructions have arrived!

One experienced dad has shared what he would tell his younger self about how to really be a supportive husband during the “becoming parents” phase- and it’s a gold mine of helpful advice.

Ted Gonder of Chicago, IL is only 29, but his wisdom proves to be far beyond his years. His third son was born a few months ago, so this isn’t Ted’s first parental rodeo.

Ted’s learned some stuff in his five years of fatherhood, and he wrote a touching Facebook post about a few things he would have told his 24-year-old, formerly childless self about being a supportive husband and father.

Ted had me at “hello”; in his opening sentence of the post, he mentions that he is 29 years old, and has three kids with his wife, Franziska, who:

who carried and birthed them all like a pro.

I love you already, Ted.

But as Ted looks back on his experiences thus far as a father to newborns, he has some pearls of wisdom he’d tell his *own younger self* about being a supportive partner to his wife.

1. Be proactive in getting in lots of skin-to-skin time with your little one:

In other words, dudes, pick up your baby. Often.

Carry him or her around every chance you get. Pop your baby in a baby sling or carrier & wear them out & about.

2. Whether wifey is breastfeeding or not, get in on the end result of all that feeding action: CHANGE THE DIAPERS.

Ted’s wife happens to have breastfed their babies, but his suggestion is important regardless of the feeding method. Being up at all hours of the night feeding a baby is exhausting.

But if your wife is handling the feeding duties, guys, you can still a great help:

You change EVERY diaper you can. From diaper #1 onward.

Get right on in on the front line early, and you’ll get over the “grossness fast”, as Ted put it. Poop happens, and it’s a lot easier to deal with when there’s more than one set of hands shoveling it up, so to speak.

But it’s more meaningful than taking care of crap (literally). Ted emphasizes that by stepping in and being an active part of the process:

you will prevent imbalances and resentment in the relationship.

This point sums up the gist of why being a supportive partner is so vital in the first place- it reduces the chances of one person doing it all & feeling resentful for it.

But that’s not all- Ted’s got more for us. And he’s nailing it!

3. Make her the decaf coffee every morning.

Ok, you lost me there briefly, Ted, at the word “decaf”, because like most avid coffee drinkers, my personality comes from high doses of caffeine. But many breastfeeding moms stick to decaf, & the point is:

She was up all night feeding the baby so help start her day in a way that helps her reset.

4. Remind your wife that she is a superhero.

Ted’s talking about words of affirmation here, and verbal assurances for an exhausted, hormonal & overwhelmed new mama are like those cups of water people hand to marathon runners.

They restore & renew. They help to soothe the broken, jagged places. They remind new moms of who they really are, and what they really are capable of.

As Ted put it:

Tell her she is beautiful and help her see that in the moments when she is feeling most self critical and hopeless about her body.

TRUTH. Because when your boobs feel like chew toys and you’re still sporting mesh underwear, you need the reminder that you’re still the apple of his eye.

He wants to remind his wife of the heroic feat she accomplished:

She literally just moved all her organs around and gained 20 kilograms to give you a child that will be a gift to you for the rest of your life.

I can’t even. Seriously, how awesome is Ted???!

Remind her of times when she achieved goals in the past.

THIS is so critically important, because new motherhood has a way of really screwing with your perception of self.

It’s so easy to lose your sense of who you are now, especially in those first few weeks. Having a supportive partner who not only knows the real you but can remind you of who the real you is- priceless.

And Ted’s last point (as if we don’t love him already….):

Ted gets that hormones “are crazy, both pre and post birth”. Some guys don’t seem to get that, despite living with a woman who likely gives evidence to support that on a monthly basis.

She might be weepy. She might be snappy. But regardless, one of the best ways to support her is to:

Remember your job is to be her rock through all of this, so toughen up and keep perspective when her tongue is sharper than you know her best self intends.

I love his description of it- to be “her rock through all of this”. Hormones can wreak havoc on us, and having a stable, consistent husband goes a LONG way in keeping you as sane as possible through those times.

Normal will return soon and you want her to be grateful that you kept it together when she wasn’t.

Yup, he’s right. This intense newborn stage DOES pass (although sometimes it seems like it never will), and your life will settle into it’s “new normal”. Giving grace through this adjustment period is huge.

The gist? Dads, get in there. Don’t be passive. Don’t assume your wife has “got this” and can handle all of it on her own.

And the other main point? Ted is obviously a genius who should be running an intensive training camp for all dads-to-be, because despite his youthful age, he has clearly NAILED this supportive-partner thing.

Ted’s advice is both practical and emotionally heartwarming; based on the fact that his Facebook post has already garnered 50K shares and 63K likes, there will hopefully be many dads-to-be taking his enlightened suggestions to heart. 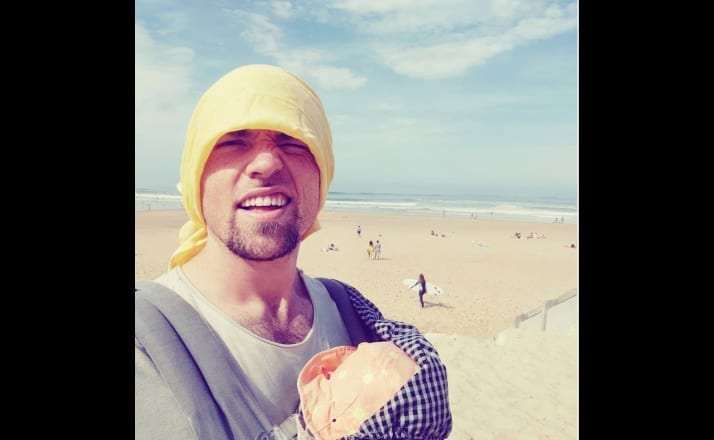